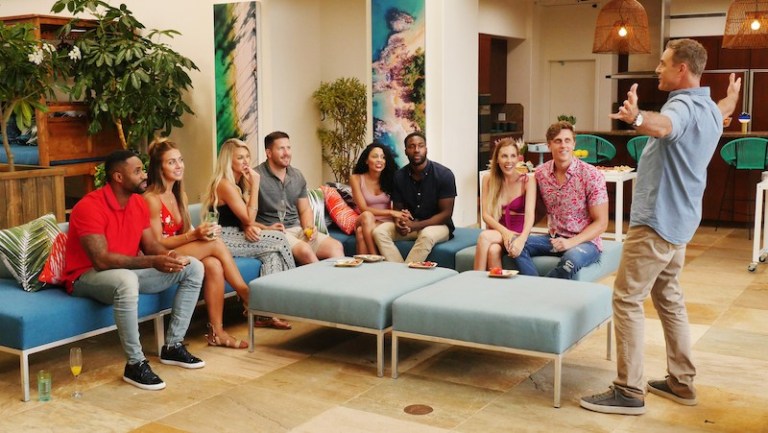 I’m gonna be honest: even though I have been a card-carrying member of Bachelor Nation since 2010, I just couldn’t get myself excited for this season. (Colton seems to be a nice enough guy, but he is also CRAZY BORING, and the show’s formula is getting stale; its primary utility at this point is as a farm system for the far more entertaining Bachelor in Paradise.) So where am I supposed to go for my televised dating kicks this winter?

What’s this? A date card for me? It says, “Everything old is new again. Signed, Temptation Island.”

You are probably too young to remember the reality-dating Gold Rush of 2000-2005, when the success of The Bachelor inspired numerous copycat shows, like Joe Millionaire, Who Wants to Marry a Millionaire?, Paradise Hotel, Average Joe, Married by America, and of course, FOX’s Temptation Island, a ratings sensation in its first season (back in 2001) before a nosedive in viewership led to its cancellation in 2003. Original host and producer Mark L. Walberg (no relation) has brought the show back from the dead to the USA Network, premise intact, to save us from yet another snoozeworthy Bach season.

And that premise is this: four committed couples agree to test their fidelity by going to a remote island, separating from their partners, and spending three weeks dating from a pool of 12 eligible, eager singles. The four guys go to one house, the four women to another, and the games begin.

Of the four couples participating in this experiment, at least two are clearly doomed. Try and guess which ones:

Evan and Kaci, both 28, were an on-and-off couple for five years before going exclusive, and they’ve now been together 10 years total. Kaci is very religious and has given Evan an ultimatum that if they’re not engaged before her 30th birthday, she’s out. For his part, Evan has good reason to be a little bit reticent, because a) his own unfaithful father was murdered by his mistress; and b) Kaci is really annoying.

Shari and Javen, both 25 have been together eight years, starting in high school, and are still trying to overcome the fact that Javen cheated on Shari several years ago, and the fact that Shari is almost unbearably controlling and obnoxious.

Nicole and Karl, 25 and 31, have been together 3 years, but she had a boyfriend when they met, and cheated on him with Karl. Now Karl is not sure that Nicole can be faithful. Funny how that works!

And Kady and John met on Bumble and have been together three years, but city-slicker John has a deep well of insecurity owing to his soft-handed background and Texan Kady’s constant chirping that she needs “a man’s man.”

When the singles arrive, they are not even through their introductions before one of the couples is fighting, and we’re off to the races! In the pilot, the contestants learn that they have the power to block one of the singles from dating their partner, and I expect that we will see many more twists and rules tweaks, designed to inflict maximum conflict between the couples, before the season is out.

The big question is, why would any couple go on this show? Even if you arrived 100% committed to your partner with zero intention of jumping ship, being separated from that partner for weeks at a time, with at least a high suspicion that said partner is in the arms of another is the surest means I can think of to wear down your defenses. Maybe people go on knowing that they want to break up, and they figure the best way to let their partner down easy is to make sure you’re not leaving them emptyhanded? Maybe it’s a scam, and the couples aren’t even couples, just people with an agreement to chainsaw through the cast of singles? Or, most likely, they’re just typical American nitwits who will sacrifice anything up to and including their own happiness, for a little bit of reality TV fame.

But who cares about that? Reality TV is about suffering and schadenfreude, and Temptation Island is ideally positioned to deliver both.