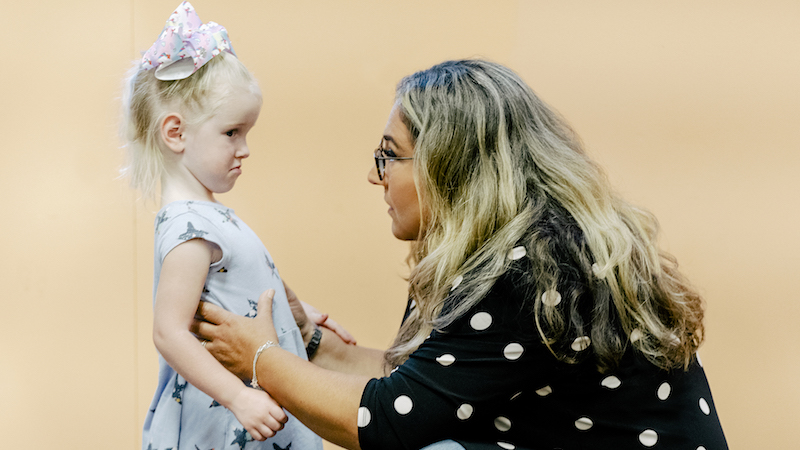 Parenting is hard. Really hard. Even if your kids are generally well-behaved, they still have their moments, and those moments tend to make you question every decision that led to having children in the first place. So for people whose children who are generally NOT well-behaved, life is basically an unrelenting misery punctuated by brief moments of respite (also known as nap time). Am I getting too personal here?

Parents in that latter category are desperate for help, and Lifetime is answering their pleas by reviving the mid-aughts reality series Supernanny, in which British childrearing expert Jo Frost (the same Jo Frost you remember, apparently preserved in amber for the 11 years since ABC canceled her) intervenes in chaotic American families to teach Mum and Dad some remedial parenting principles.

That those principles tend to sound face-slappingly obvious should not reflect on the intentions or intelligence of the parents; in the first new episode, Jo assists the Braido family, headed by CJ, a financial analyst, and Jessica, a psychiatric nurse. But despite the Braidos’ professional success, they are totally overwhelmed by their four kids: a 5-year-old daughter, 2-year-old son, and 5-month-old twins. When Frost arrives to observe their situation, she does enough silent clucking, tsk-ing, and involuntary eye-popping to let the audience know how much work there is to do.

The biggest change in the childrearing landscape since Supernanny’s original run is the advent of the tablet, or as Frost derisively calls it, “the electronic babysitter.” The Braidos explain that, while they now agree that introducing tablets was the biggest mistake of their life as parents, they have become a crutch so beloved by the children that they don’t know how to walk it back. (Expect this to be a recurring theme in the new series.)

The explosion in prevalence of both diagnosis and general awareness of ADHD diagnoses is another difference from the old show; Jessica explains to Jo that 5-year-old Rylie is so unruly that Jessica assumes the child has ADHD, though she has not had her formally evaluated. Frost quickly determines that Rylie is simply too young to have the impulse control her parents are expecting of her, and sets about both recalibrating those expectations, as well as demonstrating how to teach the very skills that the parents are expecting their children to have been born with.

I was not yet a parent when I watched Supernanny the first time around; at that time, Frost’s advice seemed like common sense, and the fact that it did not seem to be coming naturally to the parents called their intelligence into question. Watching it now, with a 12-year-old at home and the benefit of hindsight, I can’t help noticing how many of the same “obvious” mistakes my wife and I made when our boy was Supernanny age, and how easy it is to identify with beleaguered parents who, despite their best intentions, are screwing everything up. An underrated part of Frost’s services is teaching the parents not only how to deal with misbehaving children, but how to deal with each other, to get on the same page, and to not allow the kids to exploit the differences in their approaches.

A visit from Supernanny is surprisingly quick: a day of observing the family and sizing up what needs to be done; two days of direct intervention and teaching; and Review Day, when Frost returns after leaving the family alone (with the camera crew) for a week, to take a look at how things have gone in her absence and to offer final words of advice. As she leaves, it appears that all is well and the family is saved, which gives the dangerous impression that a family’s problems can be solved in less than two weeks. (As a parent, let me simply say that this has not been my experience.)

But I still wish this show had been on when our son was little. I feel like a weekly check-in on just how bad things can get — and weekly real-world examples of what not to do — would have been very helpful for my own young family. Supernanny may not fix your family in two weeks, but 20 weekly episodes of other people making the same mistakes you are….well, that might be a different story.