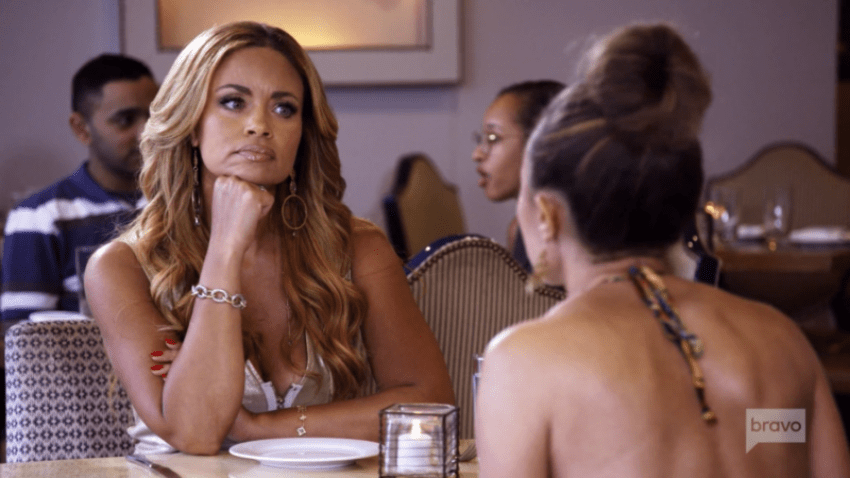 The Real Housewives of Potomac has kicked off its third season with a very public — and very pricey — tax scandal. Not since The Situation’s unfortunate situation (plus every major plot point on The Real Housewives of New Jersey) has the IRS held such sway over a reality show plotline. With fuel like this feeding the all-consuming Housewives fire, it was inevitable that the ladies would take their scenes up a notch, however, it’s the thinly veiled motives behind their over-the-top reactions that give the show its truly intriguing charm.

Here are seven scene-stealing reactions of this season so far:

Sliced into the center of the show’s season three premiere was a bit of unexpected (but totally-should-have-been expected) community theater, as Karen “confronted” her husband about “his” tax problems — and, yes, from the way things are shaking out so far, the RHOP ladies will be working the quotation mark button on my keyboard into overdrive this season.

With the man she once proudly bragged about to anyone who would (or wouldn’t) listen, Karen harped her way through a clearly-rehearsed monologue about back taxes while Ray stared silently at a plate of supermarket muffins. Poor, sweet Ray never stood a chance.

As the seasons turn, so do the endless permutations of Housewives alliances. Still, even I was shocked to see Gizelle bonding with Ashley, a woman she once immediately dismissed as a ‘THOT’, over some questionable popcorn soup. Lapping up the attention with more glee than that “soup” will ever bring her, Ashley jumped on the one thing she knew the two had in common: a heavy sense of skepticism over the nature and extent of Karen’s financial woes.

To watch Monique gush over Karen’s new car, you might not immediately know what was running through her mind. Luckily, she was quick to tell the camera what she was really thinking: “If my husband owed $4 million in back taxes, I’m not buying a new car,” she said with a knowing side-eye.

As I awaited Karen’s “press conference,” an event designed for the soul purpose of Karen chastising her castmates for talking about her on Twitter, my focus was immediately drawn to Matt. He, with his out-of-place suit and his college-ruled notebook, tried desperately to keep things professional, but the facade came crumbling down as he took in Karen’s “humorous” remarks with a “Oh. My. God. I can’t,” before issuing a chuckle that ever so barely chucked. As it turns out, if you ever need to make a tweet-centric “press conference,” even more delightfully awkward, Matt’s your man.

To the surprise of literally nobody, Karen’s “press conference” devolved in a matter of minutes. Bonus points to the waiter who has zero ability to keep the smirk off his face.

6. Ashley’s dead-eyed friend reacting to Ashley moving back in with Michael

The instability of Ashley and Michael’s romance is hardly anything new. Her entire storyline in the show’s second season was basically the two of them fighting, culminating in the reunion reveal that the two were separating. But with a new Potomac season comes a somewhat inexplicable new hope, and those two crazy kids are back together and trying to make it work. Don’t get me wrong, I’ll be watching, but I’ll mostly be feeling exactly the way that Ashley’s poor friend looks:

7. Gizelle Reacting to Sherman in General

Every once in a while, a Housewife reaction comes along that isn’t quite like the others. To watch Gizelle, who has dated herself in circles on this show, display her clear affection for Sherman, is to know there’s no hidden agenda.  If she can find someone with the grit and guts to handle all that is Gizelle, then I have to believe there’s hope for the rest of us.