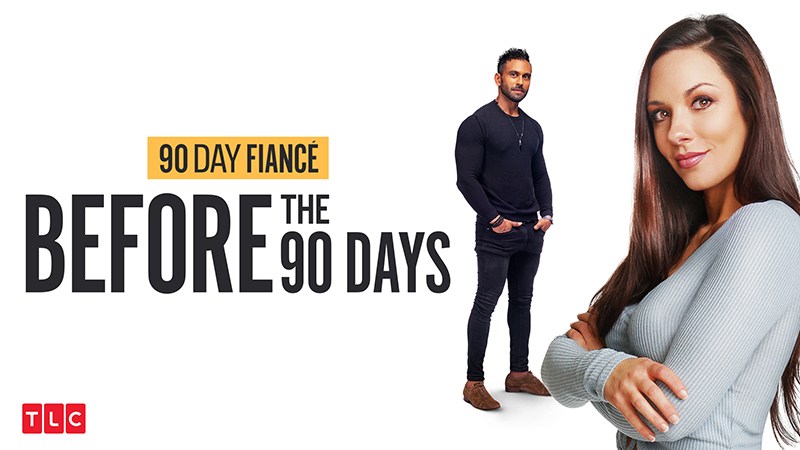 There’s no stopping the machine that is TLC’s 90 Day Fiancé and its many, many, MANY spinoffs. But why would you want to? Sure, the original premise –couples consisting of one American/one non-American have 90 days to get married or the non-American’s visa expires; drama ensues as the two gear up for matrimonial bliss — never disappoints. But the iterations that have since followed bear a uniquely dysfunctional flavor. 90 Day Fiancé: Before the 90 Days is no exception.

Like the original, Before the 90 Days, features American/non-American pairings, but these couples are in an earlier stage of their relationship. Via the magic of dating apps, social media, and email, they have cultivated relationships without meeting in person. The show follows each American to the home country of their significant other, where they chase the promise of a potential engagement.

Part dating show, part travel show, and always full-on crazytown, Before the 90 Days has everything going for it. And with these promising couples in store, it’s time to brace yourself. Whether you’re new to the series, or just can’t get enough of the current season, read on for our suggestions of past couples to watch in preparation for the show to come. All episodes from the first three seasons are now available on Sling On Demand.

When we first meet Lisa, she’s in a waxing salon, preparing herself — ALL of herself (ouch!) — to meet her much-younger Nigerian boyfriend, Usman. A famous singer in his home country (apparently?), he wrote her a song (that definitely didn’t sound like he could replace ‘Lisa’ with any number of other female names) to fully solidify their love. And while Lisa acknowledges the scam-centric Nigerian stereotypes, she’s certain their love is the real deal.

Sure, the obvious parallel to Lisa and Usman is Angela and Michael (90 Day Fiancé: Before the 90 Days Seasons 2 and 3; 90 Day Fiancé Season 7). Both couples are an older American woman and younger Nigerian man who met on Facebook; both women had never been out of the US. But when Usman said, “She is 70% good of what I expected” in the Before the 90 Days trailer, I could think of nothing but Azan’s “I am attracted to Nicole 55%.”

Floridian Nicole spent a good portion of her 90 Day screen time vying for Azan’s physical affections. And when she wasn’t fighting with her family about whether to visit him in to Tunisia, she was in Tunisia, fighting with him. The two will-they-won’t-they’d their way through multiple series of the franchise — all while Nicole valiantly defended their relationship to anyone who would listen.

She’s an all-American yogi who enjoys cooking with the perfect cannabis leaf. He’s a relationship coach from Australia who refuses to feature their relationship in his (extremely active) social media feed. In the nine months since he first slid into her Instagram DMs, she’s broken up with him three times. What could possibly go wrong?

Watch: Laura and Aladin (90 Day Fiancé: The Other Way, Season 1)

As Avery and Ash can attest, the Internet’s a double-edged sword. True, it’s what has made their relationship possible. But Avery’s constant suspicion of Ash’s online activities with other woman supplies a serious source of distrust.

Laura and Aladin appeared on the first (and so far only) season of 90 Day Fiancé: The Other Way. As a personal trainer in Qatar with a sizeable Instagram following, his online activity was decidedly…active. Even as Laura was packing up her Floridian life to join Aladin in Qatar, she just didn’t trust him. The two simply couldn’t stop fighting over Aladin’s Instagram, which often resulted in him blocking her from his accounts. And as you might imagine, the pattern didn’t exactly prove promising for their IRL dynamic.

If man you met online has super hot pictures but refuses to video chat, you have to assume it’s either 1998 and he can’t afford a video camera…or that something is off. And Manchester-based, obnoxiously buff Williams wasn’t living in 1998 when he slid into the Instagram DMs of 51-year-old Yolanda.

Shockingly, Williams isn’t the only person on the Internet who might be fudging the truth. Yolanda mayyyy have rounded her age down and employed ‘younger-looking outfits’ to keep the romance alive. Will the two be everything they need each other to be? There’s only one way to find out.

Yolanda is far from the only member of the 90 Day family with a potential catfish situation on her hands. And in her giddiness at the emojis she receives from Williams, I see the equally starry-eyed Cortney.

Back when Before the 90 Days was in its infancy, Cortney was prepping to go to Spain for underwear model Antonio. Her boyfriend (that she had never met in person) texted her constantly, but deftly ducked any opportunity to call or video chat. Some might suspect a catfish. But not Cortney. Instead, she decided to fly to Spain and stay in his extremely tiny studio apartment. It was…a choice.

Darcey appears for only the most fleeting of moments in the Before the 90 Days trailer. But it only takes one of her particularly pointed cocker spaniel head tilts to see that she’s back in full force. With the tension in her never-steady relationship with Tom now front and center, we should all know from past experience that we’re in for a real treat.

For those of you just now joining us, this is far from Darcey’s first time in the 90 Day franchise. Nor, in fact, is Tom the first man that she has appeared with on the show.

From the moment she and her Dutch (ex) boyfriend Jesse first appeared on the scene in 2017, things were never the same. With the Louboutin heel that broke the airport arrivals escalator, Darcey stole both my (television) eyeballs and (figurative) heart. Since that fateful appearance, Darcey and Jesse’s turbulent relationship seems to have crashed for good. But, like a phoenix rising from the ashes, Darcey rose to the occasion offered by the third season of Before the 90 Days — this time, with Tom at her side. And while the show has yet to prove itself as a source of steadfast love for Darcey, her appearances have a lot to offer the rest of us.