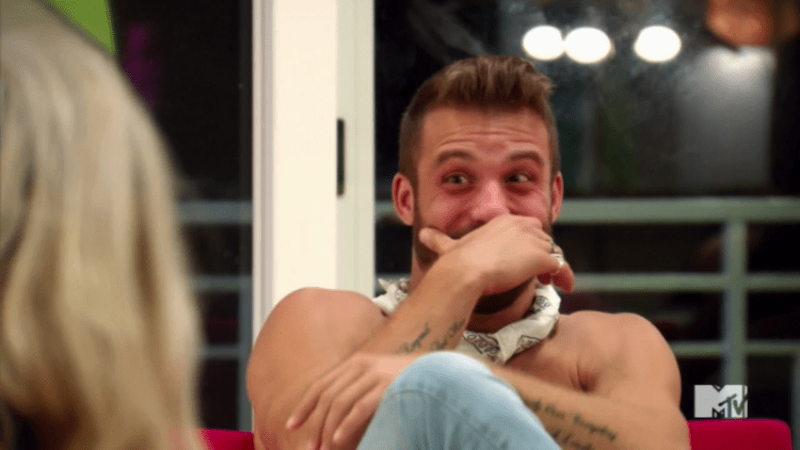 Bringing together a cast from a wide range of sources (read: ex-contestants from Are You the One?, Big Brother, the Bachelor franchise, Faith from Vanderpump Rules and a few random “influencers”) to one show that promised them a magical beach vacation but instead parades their exes in to ruin the party, one at a time, just to see exactly how much havoc they can wreak.

But every great story has a humble beginning, and this cast is no exception. Here’s a rundown of some of the Beach‘s most notable couples with quick refresh of where you may have seen them before.

Chase and Victoria (and Skyler)

Chase McNary (JoJo’s season of The Bachelorette) has come a long way from his days of dropping a beat in the back of a bus.

On his first night in the house, this lucky fellow caught the eye of fashion influencer Victoria, a self-described “personal stylist who watches The Bachelor live on Mondays!” With the arrival of Chase’s ex Skyler (one of the few other non-reality vets in the house), it’s a little unclear whether Victoria’s full-on Bachelor obsession will ever fully manifest into a relationship with Chase.

Of course, don’t think that means we’ll all be spared the countless unbearably obvious “chase” puns being thrown around, because we haven’t. And, most likely, we won’t.

Tor’i and Angela (and Derrick)

Fitness “model” (?) Tor’i and Bad Girls Club alum Angela were the first to enter the Ex on the Beach house. They were also quick to establish other “firsts” in the house. Accurately summed up by housemate Victoria, their relationship has so far consisted mostly of, “What’s your name? Okay, we’re going to go have sex now.”

But, just when it seemed that the “too Jersey for even Jersey” Angela had it made, the show threw her a curve ball in the form of her ex-boyfriend Derrick.

If you’re anything like me, you may fondly look back on a bright-eyed young Derrick losing his mind over Taylor (more on her below) and Andre’s Are You the One? romance in the show’s fifth season.

After finishing his run in the first (and, so far only) Are You the One? cast that failed to win the cash prize, Derrick was part of the first couple eliminated Are You the One: Second Chances.  His appearance on Ex on the Beach, however, promises to do more than just mess with Tor’i and Angela’s temporary bliss.  There’s a bit of backstory between Derrick, Ex on the Beach housemate Cory, and Cory’s ex Alicia (who, like Derrick, is another Are You the One? alum) that promises to play out over the episodes to come.

Cory Wharton has officially come full circle. Although he’s been on approximately fifty billion season of The Challenge in the interim, he got his start on MTV’s Real World: Ex-plosion, where the cast’s exes showed up to live in the house.

Now four years deep in his reality career, Cory has developed quite the reputation for his relations with the ladies, both on-and-off camera. Pretty much the only surprising thing about his early-season hookup with Are You the One? alum Taylor Selfridge is that she fell for his drunkenly slurred, “so kiss me in my mouth.”  With Taylor’s ex set to show up next week, and the fury over Cory’s ex Alicia (discussed above) already starting, there’s no telling what’s in store for these two this season.

Jasmine introduces herself  with a proud declaration of, “I’m known for wanting to choke out my Bachelor.” While, yes, there’s that, plus her ill-fated Bachelor in Paradise spin, Jasmine actually seems pretty cool. She almost seems like the level-headed one of the house, who was quick to duck Cory’s questionable advances. Not to mention, who could say anything bad about a woman who takes her love for dark chocolate so seriously?