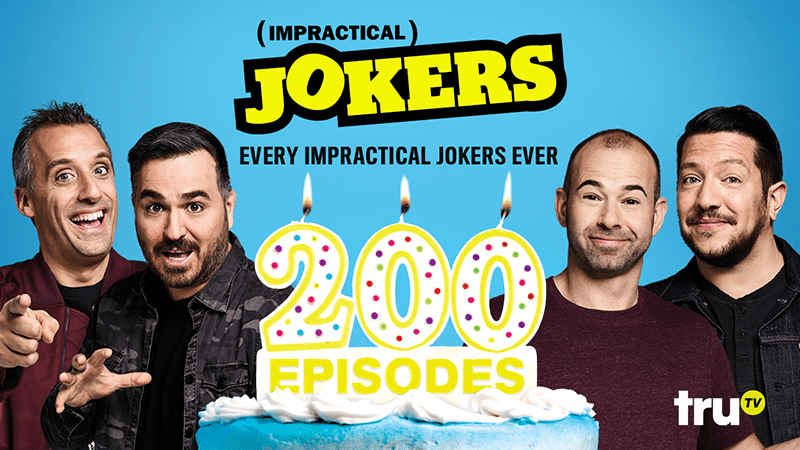 Soon enough, each and every one of us will have been pranked by the Impractical Jokers.

As truTV’s hit comedic reality game show approaches its 200th episode, one can’t help but muse about the show’s scalability. With 200 episodes in the can, and roughly four sketches per episode, The Tenderloins — the comedy troupe of Joseph “Joe” Gatto, James “Murr” Murray, Brian “Q” Quinn, and Salvatore “Sal” Vulcano — are approaching 1,000 pranks making it to air. If one assumes that five pranks are shot for each one that airs, we’re rapidly approaching 5,000 pranks. The show premiered just over eight years ago, and now averages roughly 30 episodes per season, so by our mathematically-sound projection model, all Americans will have fallen prey to their hijinks by April 2023.

Related: Check out our 2016 interview with Murr

Until you find yourself pranked by the Jokers, you can revisit their funniest moments with our curated list of their best episodes. Not only do we have episodes featuring the best moments from all four comedians, the boys themselves hand-selected their favorite episodes as well. Whether it’s Sal getting booted from a BINGO parlor for misunderstanding its one simple rule (“B-I-N-G-O”) or Murr undergoing a prostate exam in public (“Dark Side of the Moon”), the punishment the guys dish out to each other follows a pattern: the worse it is for them, the funnier it is to us.

If you’re looking for more of a volume experience, you can binge the entire series leading up to the 200th episode by tuning into truTV’s 24/7 Impractical Jokers marathon. Watch long enough, you might even spot yourself in an episode.

Check out our curated list of the best Impractical Jokers episodes on the Sling app and tune into their 200th episode special on Thursday, Feb. 13 at 10pm ET.