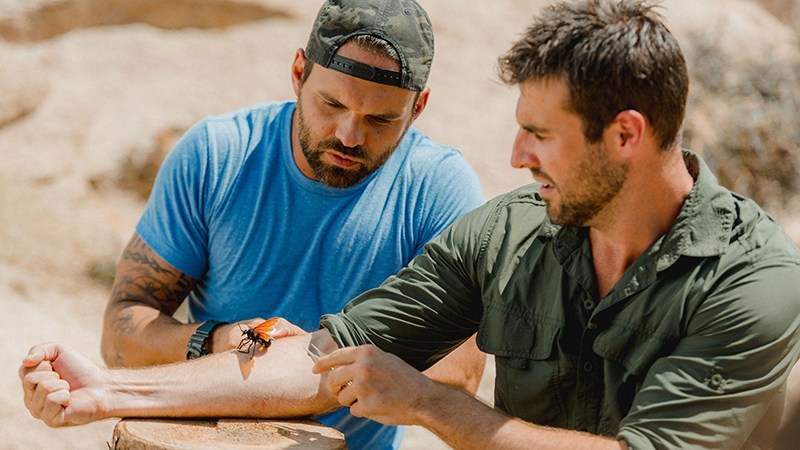 In 1983, Dr. Justin Schmidt went into the jungle and allowed all manner of creatures to bite, sting, and otherwise use their natural defenses against him, so that he could put those stings and bites on an objective continuum of pain, from 1 to 4. Dr. Schmidt published his findings in his book “The Pain Index.”

In 2019, zoologist Adam Thorn and animal handler Rob “Caveman” Alleva decided that “The Pain Index” is outdated and unrefined, so they endeavored to go into the jungle, hunt down every nasty bug, insect, and reptile they could find, and, like Dr. Schmidt, allow those creatures to bite or sting them so they could rate the results on three ten-point scales — Intensity, Duration, and Damage — for a final score of up to 30. The result: HISTORY’s new reality show Kings of Pain.

Now, it is certainly entertaining to watch these guys literally torture themselves — not just as they get stung or bitten or choked out, but as they stare at these creatures and consider the prospect of getting stung, discuss it with each other, talk about the other creatures they’ve been stung by before, point out the talons or fangs or stingers or whatever, discuss it some more, etc. etc.

But you also can’t help but wonder about the practical application of the information these guys are tormenting themselves to obtain. I suppose the next time I find myself in the Amazonian jungle, trying to decide between a path full of tarantulas or one full of rattlesnakes, I’ll think, “well a tarantula bite only scores a 22 on the pain index, whereas a rattlesnake bite is a 28, so I guess I’ll take my chances with the tarantulas.” But with no such Amazonian sojourns on my calendar, it’s hard to see when this info might come in handy.

Of course, this is entirely beside the point. Kings of Pain is about watching people react to pain, and discussing that pain in detail. In the first episode (watch here — Sling login required), Adam and Caveman Rob compare two particularly nasty-looking species of wasps’ stings (the Warrior Wasp and the Executioner Wasp), before comparing those to the bite of a Goliath Bird-Eating Tarantula.

But they don’t just walk into the insect house at the zoo — they have to find and wrangle these critters first, and then take turns getting bitten. In a stern reminder that their quarry are only a small thread in the enormous deadly tapestry that is the jungle, they find a fresh jaguar paw-print in the road (sorry — “road”) while searching for wasps.

Once they find the creatures, they discuss what to expect, and then it’s biting (or stinging) time. Obviously, the bites are shot in super slow-motion close-ups so you can really get your cringe on.

Perhaps my favorite detail in the show is the fact that, naturally, there is a physician on hand as the guys inflict this pain on themselves; the cutaways to that physician’s reactions are best described as “Halpertesque.”

Not unlike The Misery Index, another new show with a similar premise but far, far lower stakes, this is the kind of show that is best watched with friends or family: You’re not going to miss any crucial dialogue as you shout at each other whether you’d rather be bitten by a piranha or a python, but you will have a good time.

New episodes of Kings of Pain air at 10pm ET Tuesdays on HISTORY, and are available Wednesdays on demand.