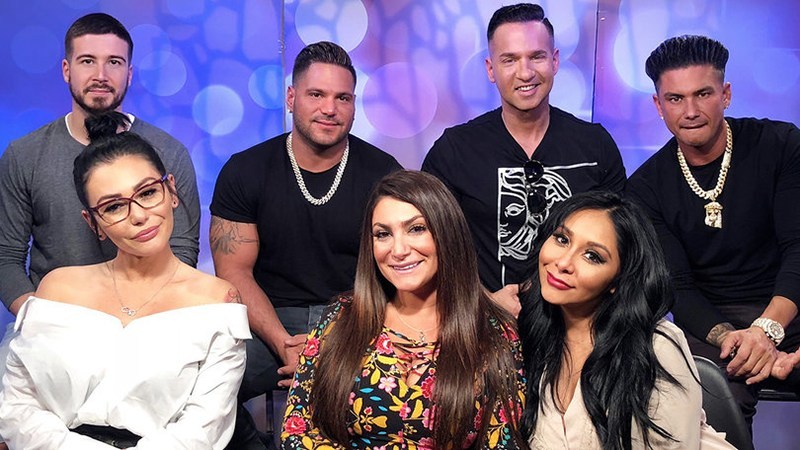 For the cast of Jersey Shore Family Vacation, their show is just part of what brings us into their world. Between the stories that are sold, stories that are told, and stories that are otherwise written, their personal lives are constantly in the gossip column spotlight. It’s no wonder, then, that the first half of the show’s third season (which aired on MTV late last year) feels like a true crime show, with news footage and headlines constantly being thrown at the screen.

As we gear up for the season’s February 27 return, there’s a lot to catch up on from the first half. And because the headlines haven’t stopped since the show went on break, we’ve made some predictions about what the second half will cover. Read on for a digest of key Jersey Shore headlines/storylines, just in time for Thursday’s midseason premiere.

Jenni (“JWoww”) spent the show’s second season trying to keep her personal life under wraps; for the third, she gave up. As she explained, once her ex took to social media in a series of woe-is-me videos, she no longer saw the point in keeping the discussion off camera. And boy, did she ever course-correct. The show offers clear insight into exactly where JWoww believes Roger went wrong – and why.

The third season kicks off with Ronnie going to a thirty day rehab. And while working the steps seems to have strengthened his relationship with Mike (“The Situation”), it apparently wasn’t a cure-all. Tensions between Ronnie and the mother of his child were palpable for the season. The cast reactions played out on screen, both in real life and in response to news alerts on their phone.

Unfortunately, the headlines continue to indicate that things have only gotten worse since then.

The third season opens on the morning after The Situation’s wedding. Like any newlywed, he was excited to spend the holidays with his wife. But the looming threat of his upcoming “vacation” (read: jail time) hovered over the celebration. While he’s in jail, the show obviously couldn’t film him. Instead, the cameras eagerly captured the casts’ reaction to their friend’s fate.

But never fear. Following a (shockingly) failed attempt to solicit a pardon from the president, he will return in the second half of the season. As the promos promise, “Reunited…and it feels so good.”

Stories to watch for as Season 3 returns

The Fall of Angelina

It’s never been easy being Angelina. True, she doesn’t always come across on TV as the world’s most upright citizen, or even as a particularly nice person. From the beginning of the show, her castmates have openly hated her. Even after leaving the original and coming back in the middle of the reboot, not much seems to have changed. Of course, she has her moments (JWoww seems to tolerate her at times; she and Ronnie have some semblance of a friendship). But clearly, that’s not enough to make a permanent change. Keep an eye out for what was said at her wedding – reportedly, it was enough for her to shut her castmates off completely.

The darkness hanging over the relationship between these two just won’t quit. And as obvious as it was to the people closest to them, they seemed incapable of staying away. Following the events of the first half of season 3, things have continued to escalate, starting with Ronnie facing criminal charges for alleged domestic violence. With the attention their relationship received during the first half of the season, it seems inevitable that it will be featured in the second. We can only hope that this latest split is for good.

Jenni spent the bulk of the first half of Season 3 in a downright giddy state. Yes, she shocked her castmates with a lightening speed jump into a new relationship. And sure, Zach (AKA 24, which so happened to be his age) did seem like an odd choice. But she also seemed genuinely happy. The show initially helped drive them apart (she dumped him after watching some less-than-flattering behavior from the first part of season 3 play out on air). But now that they’re apparently back on, perhaps we’ll get to see those ups and downs play out on camera.

The second half of Season 3 of Jersey Shore Family Vacation premieres February 27 at 8 p.m. ET on MTV. Catch up on the first half of the season, now available on demand.