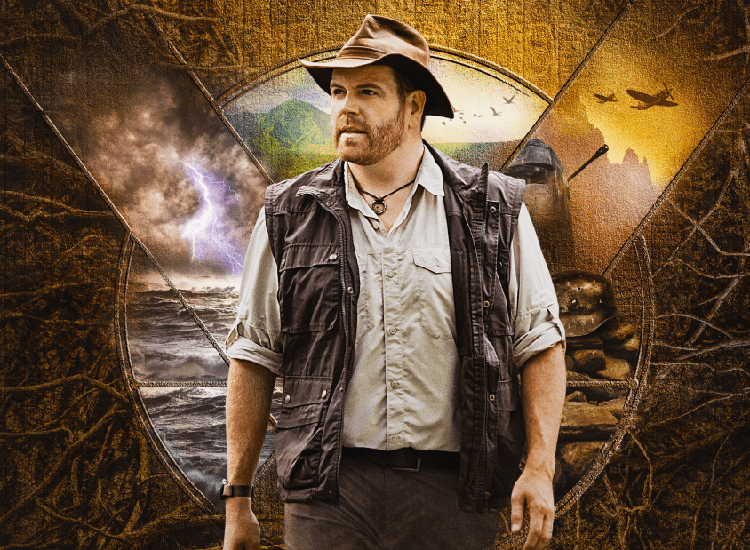 WHATSON SLING ENTERTAINMENT REALITY 5 EPIC EXPEDITIONS ON 'EXPEDITION UNKNOWN'
5 Epic Expeditions on 'Expedition Unknown'
With 1,000s of hours of content, we're picking some of our favorite shows on Sling Free. This week, its Discovery's Expedition Unknown

This week, we’re taking a look at Season 7 of Discovery Channel's Expedition Unknown. This adventure show features Josh Gates traveling the globe to investigate unsolved mysteries and other puzzling events. You can watch now for free on Sling!

Episode 3 - In case you missed history class, Sir Francis Drake led England against the Spanish Armada and was the first captain to circumnavigate the globe. Starting off in England, Josh heads to Plymouth to examine his upbringing and look at Drake’s life on land. As you can imagine, Drake was a larger-than-life figure and power hungry; he was also treasure hungry and left a lofty chest in Panama where he onced sailed. Josh heads there to find the famed fortune, and you won't want to miss the ending to this real-life, modern-day treasure hunt!

Episode 5 - In this episode, Josh investigates Siberia’s coldest case: the Dyatlov Pass incident. 60 years ago, nine Russian friends died hiking — and no one has ever been able to figure out what happened. Their wilderness club carefully documented their travels, so we’re able to find out that they went to Dead Mountain (which was unsurprisingly renamed to Dyatlov Pass after the event). However, when their bodies were recovered, they weren't wearing any of their hiking gear, and some of them suffered gruesome injuries. There are dozens of theories as to what happened: a military explosives test, UFOs, and an avalanche, to name just a few. Josh travels to the frozen tundra of Russia to see if there’s truth behind any of them.

Hunt for the Chupacabra

Episode 7 - The famed and notorious chupacabra has been a subject of great interest in recent times. Known in folklore as a vicious and violent monster, the modern legend of the chupacabra began in Puerto Rico, where, in 1995, dozens of animals were found slaughtered and drained of their blood. The manner of death turns up many rumors, as no documented animal could be capable of this. Thus, the legend of the blood-sucking chupacabra is (re)born. Like Josh, I was skeptical, but when he goes to Puerto Rico to get to the bottom of this one, it just might surprise you what he finds.

Gold Rush of the Atlantic

Episode 11 - Josh has done plenty of treasure hunting, but nothing compares to his search for the Lost Spanish Fleet of 1715. 12 treasure ships sailed to the New World to pay off Spanish debts, but after a deadly hurricane hit, 11 ships went down along with their treasures. These sunken ships are somewhere along Florida's aptly-named Treasure Coast, and Josh is on his way there to find them. There’s still five ships unaccounted for, and each has potentially billions of dollars worth of treasure in them. With so many different treasures to uncover, this high-stakes hunt is truly exciting.

Search for the Sultan’s Heart

Episode 12 - There’s no metaphor in this episode’s title: Josh is actually on a quest to find a sultan’s heart, which, according to legend, is still beating in its grave. Suleiman the Magnificent ruled the Ottoman Empire in the 16th century and after dying in battle, his heart was placed in a golden container at a fancy burial site. But because site was quickly destroyed, the location of the heart was lost to history. Josh travels through Hungarian tunnels and eventually finds the tomb, but is the heart in it? More importantly, is it somehow still beating?

Find out by clicking link below to watch Expedition Unknown right now on Sling Free!