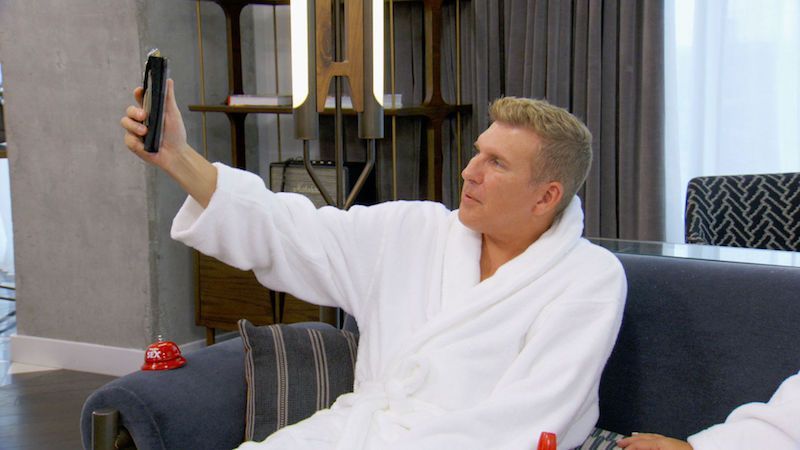 Among the casualties of the Golden Age of Television has been the traditional family sitcom, which has been forced to mutate over the years to stay relevant for audiences whose tastes and senses of humor have splintered and changed. Chrisley Knows Best, which is about to debut its seventh season, is structurally a seamless hybrid of the classic family sitcom and reality TV, kind of like if Modern Family were the reality show it pretends to be. Starting with the title Chrisley Knows Best, a callback to the fifties sitcom Father Knows Best, the show makes clear its intentions: to update old-timey sitcom plot points by dressing them up in the reality garb of the fabulously wealthy real estate tycoon Todd Chrisley. This is the sitcom world of bygone days, where dad is constantly angry or aggrieved, while mom hangs a dish towel over the handle to the oven door that reads “Behind Every Great Man Is a Woman Rolling Her Eyes.” Instead of putting himself in mundane dilemmas like promising to go to one child’s baseball game and another’s ballet recital – at the same time(!), Todd backs himself into a corner by offering the family McMansion to both his oldest daughter and his oldest son.

It’s not just the plotting and the beats that are familiar, each member of the Chrisley family seems vaguely familiar, as well:

·      Todd echoes Bernie Mac’s always angry, but soft-hearted dad. He’s convinced his kids are simultaneously morons and out to get him, forgetting that he should be able to stay one step ahead of a moron, which he constantly fails to do.

·      Julie (wife and mother) is a Southern-fried Marion Cunningham (Happy Days), but with sharper elbows. A traditional stay-at-home mom, even Julie’s major foray outside the home was in line with her primary role, as she launched a short-lived cooking blog. She mostly occupies her time running the house and refereeing the shenanigans between Todd and the kids.

·      Savannah, the eldest daughter, is a platinum blonde in the Marsha Brady (Brady Bunch) mold – like her predecessor, Savannah is pretty, loves her parents, is driven crazy by her oldest brother and tries to stay above the fray.

·      Eldest son Chase by his mere existence poses the question “What if Bud Bundy (Married… With Children) were rich?” Prone to money-making schemes, he’s a bit mouthy and never passes up a chance to go to war with the old man. In this new age of family sitcoms, Chase is free to announce to the guests at his father’s fiftieth birthday party, “I just wanna slap the (bleep) out of you sometimes” and have it come off as one of the series’ more touching moments.

·      “Nanny” Faye, Todd’s mother, is straight out of the Golden Girls playbook, a seventy-something retiree who maintains healthy youthful appetites. When she’s not gambling, she likes to spend her days ogling the neighbor’s swimming instructor while spiking her drinks from a flask disguised as a bracelet and declaring “I’m gonna frosé all day.”

·      Grayson, the youngest son, gets saddled with the role of Malcolm in the Middle’s Dewey, the younger sibling/third wheel who is clearly dying for the older kids to finally get lives of their own so he can take the spotlight. They throw him a bone now and again, putting him at the center of a plotline, but it typically ends, like all Chrisley plotlines, with Todd’s putting his hands on his hips and shaking his head.

·      Chloe, Todd’s granddaughter, is your standard issue super cute kid whose primary job is to say about one cute, often precocious, thing an episode, sort of a budding Ruthie Camden (7th Heaven).

Savannah and Chase finally left the nest this spring, striking out on their own in Growing Up Chrisley, which followed the two of them as they roadtripped to Los Angeles to seek fame and fortune. But fear not, they will be back in the fold for the premiere of Season 7 of Chrisley Knows Best, because this is a family sitcom after all and they know where their bread gets buttered.

What lay ahead for the Chrisley clan in Season 7? Will Grayson put too much soap in the washing machine and cause a giant flood of suds to overtake the kitchen? Will Nanny Faye come home with a much younger man? Will Savannah get pregnant? Will Todd’s doctor tell him he has to change his diet and lose weight? Will Todd try to give Chase relationship device that ultimately blows up in the young man’s face? Will Julie’s high school boyfriend come out of the woodwork, looking better and richer than ever? Will Todd’s fashion sense ever improve? Who knows! But whatever happens, you can be sure it will end with the whole family going into Todd and Julie’s bedroom to say goodnight, then Todd trying to goad Julie into sex only to have her rebuff him with a zinger and then roll over with her back facing him as she pulls the covers tight around her. Classic.

Catch the two-episode season premiere of Chrisley Knows Best on Thursday, May 25 at 10pm ET on USA