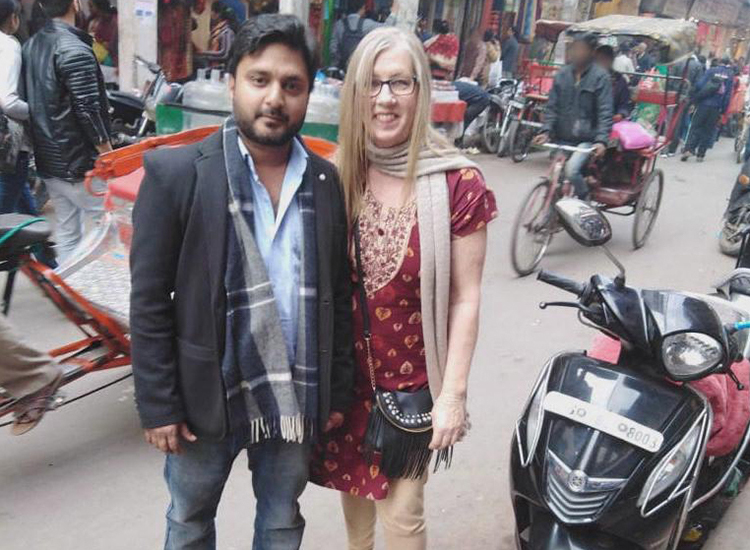 Jenny and Sumit Belong Together Forever (in India)

Jenny and Sumit are two broken, lonely people who found each other despite all obstacles (including the ones they put up for themselves). If that’s not worth giving up everything for, I don’t know what is.

And in Jenny’s case, what is she really giving up? The first season of 90 Day Fiancé: The Other Way launched her tragic tale. When we met the 60-year-old Juliet-in-training, she was living in her daughter’s Palm Springs apartment, pricing all the scandalous items in her closet for quick sale on Ebay. When moving to India to be with your 30-year-old former-catfisher-turned-current-love-of-your-life, that’s just what you do. And as we soon learned, you also drain your life savings, sell all your furniture, and leave your friends, children, and grandchildren to risk it all for love.

“I think that everyone’s entitled to happiness,” Jenny reasoned. After her ex-husband spurned her for someone else, she finally felt that she had not only recovered from the heartbreak, but found her soulmate. And sure, there were a few details of his personal life that he hadn’t been upfront about. Granted, the minor omission about being married to another woman probably should have come up before the woman’s family showed up on Jenny’s doorstep. But there was clearly never any malice in Sumit’s patchwork version of reality. He just knew that their love was real — and the rest would figure itself out. Plus, Jenny later admitted that she would have come to India even if she had known about his hidden wife. So it didn’t make much of a difference anyway, even though it ultimately forced her back stateside.

Heading into The Other Way’s second season, Jenny is once again crashing on a daughter’s couch, and once again gearing up for a life in India with Sumit (who is still technically married, but swears he’s getting a divorce). But remember, she had already given most of her life up back in season 1 of the show. This time, she has nothing to lose but the penalty fees on her early social security claim. In the face of everlasting love and happiness, isn’t that a small price to pay? - Stephanie Brockman

While I truly believe Sumit and Jenny love each other (it’s a love story for the ages, isnt it?), I can’t help but question the long-term viability of Jenny moving to India. First, let’s discuss the fact that Sumit’s family won’t even acknowledge her or get on a FaceTime call to say hello. I’m not sure they will ever acknowledge her existence, much less accept her as part of the family.

Second, Jenny cannot get a job in India. We already saw how bored she got in The Other Way’s first season with nothing to do. She can’t go out on her own and she will have no friends outside of Sumit. It's a lot of pressure to be someone’s everything; Sumit might crack under this pressure, especially as time goes on and his family remains firm in their resistance to his marriage. Even Sumit’s friends might eventually abandon him.

Let’s also consider that Sumit has to pay off his ex-wife to the tune of $20,000 (!), and it’s up to Jenny to support them both. As we saw with her financial advisor in the early episodes of The Other Way Season 2, if Jenny takes her social security at age 61, she will receive $650.00 a month. After expenses, Jenny and Sumit will be living on about $75.00 per month. Ouch. Perhaps Jenny should wait just a bit longer (what’s another year or so at this point?) so Sumit can pay off his ex-wife and Jenny collect more benefits. I, for one, think her daughter and her wife are lovely (give them their own show!), so crashing in their Palm Springs pad can’t be that bad.

I hate to make this all about money, but love don’t pay the rent. And financial troubles in a foreign country are almost certainly going to be too much for Sumit and Jenny to overcome. There may not be malice here, but the naivete cannot be ignored. Regardless of our debate, I think we can agree on one thing: this makes for great reality television! - Michele Drohan