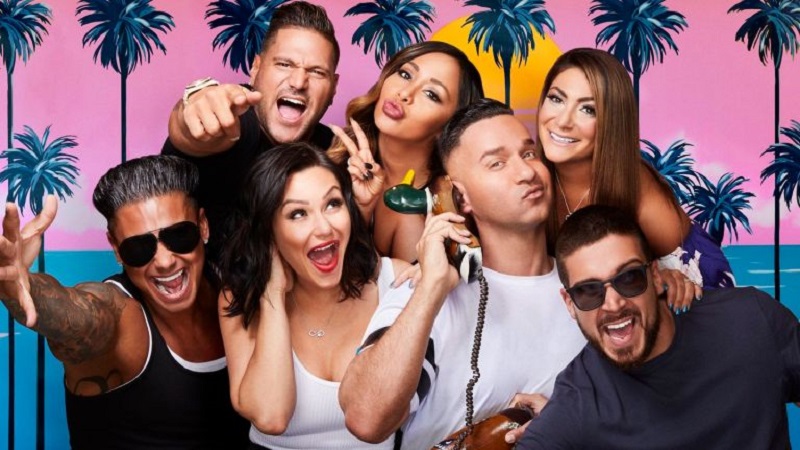 “Take Snooki, put her in Miami, still gonna be a Snooki,” observed a keenly insightful Vinny. And, he’s right for the most part.

Jersey Shore Family Vacation reunites the original  Jersey Shore cast (minus Sammi and, obviously, Angelina).  But it’s not all fist-pumps at Karma. In between the Shore and Family Vacation, life has happened. From the benign realities of bodily functions and just generally growing up to the deeper reality of parenthood, responsibility, court appearances and rejection, this reality show can’t hide from the impact that life has had on its cast.

Ronnie’s other-worldly bowels produced scene after scene of van-farting, toilet-clogging, plunger-defying entertainment. Like the good book says, everyone poops, Ronnie just brings on the call of nature with more force than most.

9.  “Like, we don’t even chug vodka anymore. Now, we chug wine and Prosecco. We’re more like a classier meatball.”

Typical “meatball” antics once meant flashing large crowds of random Italians, but now, like the fine wine they gulp down by the gallon, Deena and Snooki have mellowed a bit — by their standards, anyway. If you think for a second they can get through an episode without drunken screeches blurring into drunken tears, you are sorely mistaken.

8.  “I love you. You’re my best friend” – Snooki to a cold pepperoni pizza

There’s nothing like stumbling out of an alcohol-induced stupor, taking a detour through some ant-covered pizzas, and finally landing on one that hasn’t been touched. Honestly, it was far more relatable than Keto-fanatic Vinny picking toppings off a pizza like a pelican, and at the end of the day, who doesn’t want a delicious pile of oily meat and carbs to call their own?

Sure, they started off in the original series as strangers, but after six seasons on-air and a five year break before reuniting, this crew has history. Remember when Jwoww punched Mike? When Vinny and Angelina had it out? Or, the ‘fight, make up, and fight some more’ cycle that Sammi and Ronnie. called a “relationship”? None of it was particularly healthy, and all of it began to seep out of Ronnie’s rage-filled pores when confronted by his long-time frenemy, Mike. Only time will tell how long his seething will simmer below the surface.

Look, I love the Jersey Shore cast members, and because of that, I take them for what they are. Are they the best the American education system has to offer? Nope. Are they literate? We can only hope.

Things took a turn when a conversation about Snooki’s breast implants led to both Snooki and JWoww breaking down in tears over how much they missed their kids. With 99% of the gang’s antics back in their usual alcohol-soaked groove, it’s always a shock to remember that, while all appears the same on the surface, life has played out in real time since we last saw this cast.

4. “He really is, like, born again, and I mean not ‘come out of the vagina like a baby’ born again, but I mean like, he’s a new soul.” – Deena, on The Situation

Two years sober, the Situation put his chances of Family Vacation survival as “very slim.”  Though I was concerned at first to see him jump back in, it was clear from the get-go that he had the genuine love of all (or, at least, most of) his former roommates. The touching way that they rallied around him (that is, before the barely-clothed lady performers started shaking their behinds in celebration of his return) was a powerful reminder of the casts’ genuine affection for each other.

3. “They even have the nickname ‘The Situation’ on the paperwork. So crazy” – The Situation, pretending he isn’t totally thrilled that the IRS watches this show

In case you haven’t heard, The Situation has been stuck in a bit of a situation. Certainly, the severity of the pending charges wasn’t lost on the cast, who were clearly shaken by the thought of potential jail time for their friend. This undeniably next-level degree of realness only slowed the party, however, it would take much more to stop it.

2. “I’ve got a couple more months before this kid comes flying out of there, like a wet’n’wild…” – Ronnie, on the miracle of birth

Ronnie left his seven-months-pregnant girlfriend at home to film the show. The looming realities of fatherhood, combined with Ronnie’s apparent ambivalence towards the whole thing, make his scenes just a little uncomfortable — but undeniably oh-so-juicy — to watch.

Even Deena’s tearful questions about Ronnie’s reaction to her father’s death couldn’t deter Ronnie from breaking down over his ex-girlfriend Sammi (who’s noticeably absent from the show).  Never have I seen a passion more real and raw than Ronnie’s as he (once again) worked through the aftermath of his relationship. In ways that only a true Jersey Shore fan can understand, even after all these years, the ‘Ronnie and Sammi’ show will just. not. end.