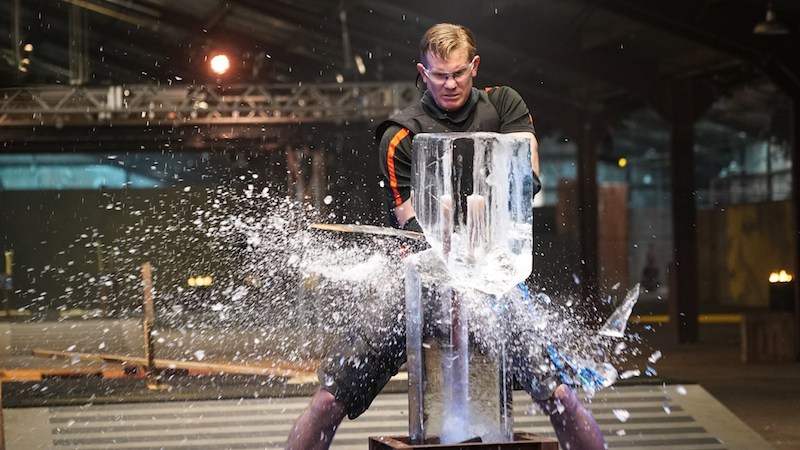 What do five guys dressed like a cowboy, an Australian bushman, a Scotsman, an Army guy, and a Ren Faire Viking all have in common? (Other than uncommon commitment to their look?) If you guessed that they sing disco classics like “In the Navy” and “Y.M.C.A.” under the stage name The Village People, guess again.

They are all edged weapon enthusiasts competing on HISTORY’s new spinoff from its hit Project Runway–for-blacksmiths series Forged in Fire, the perfectly titled Forged in Fire: Knife or Death.

Unlike on its parent series, Knife or Death contestants don’t have to make their own weapons in order to compete. Some do, but others bring blades they’ve found, or purchased, or inherited, or pulled from a stone, so there is a variety of types of knife, from Bowie to Kukri to Falcata to Seax to full-on longsword.

As for the competition itself, it takes place on an obstacle course that tests the strength and sharpness of the blade, as well as its wielder’s strength and technique: cutting through ropes and dowels before moving up to suspended pickle buckets and crates, a huge block of ice, and then finally to a suspended fish, a suspended chicken, and a sheet of metal.

To those unschooled in the art of edged weaponry, this might sound a little boring. But there is something mesmerizing about it, particularly the frequent slow-mo replays of key moments, that makes the hour fly by — this would be a very easy show to accidentally binge if you wandered into an all-day marathon. And nearly as entertaining as the actual knife play are the personalities involved: as you can probably imagine, a man who would wear a gleaming steel battle mask to his first meeting with the judges is a man with an interesting perspective. If anything, I would like to see more about where these guys come from and how they got so deep into the knife game.

The show is capably hosted by former pro wrestler Bill Goldberg, assisted by martial arts master Tu Lam, whose expertise is useful in analyzing the contestants’ technique — who knew there were so many wrong ways to skin a cat? And to the extent that there is any mentoring happening, former Forged in Fire champion Travis Wuertz serves as the show’s Tim Gunn analog, though that mostly means he inspects competitors’ blades right before they start the course.

We devoured season 1 in two sittings, and can’t wait to see what kind of tweaks or adjustments have been made to the obstacle courses and the rules. Take a stab at it!

Season 2 of Forged in Fire: Knife or Death premieres Wednesday on HISTORY; new episodes will be available next day on demand.