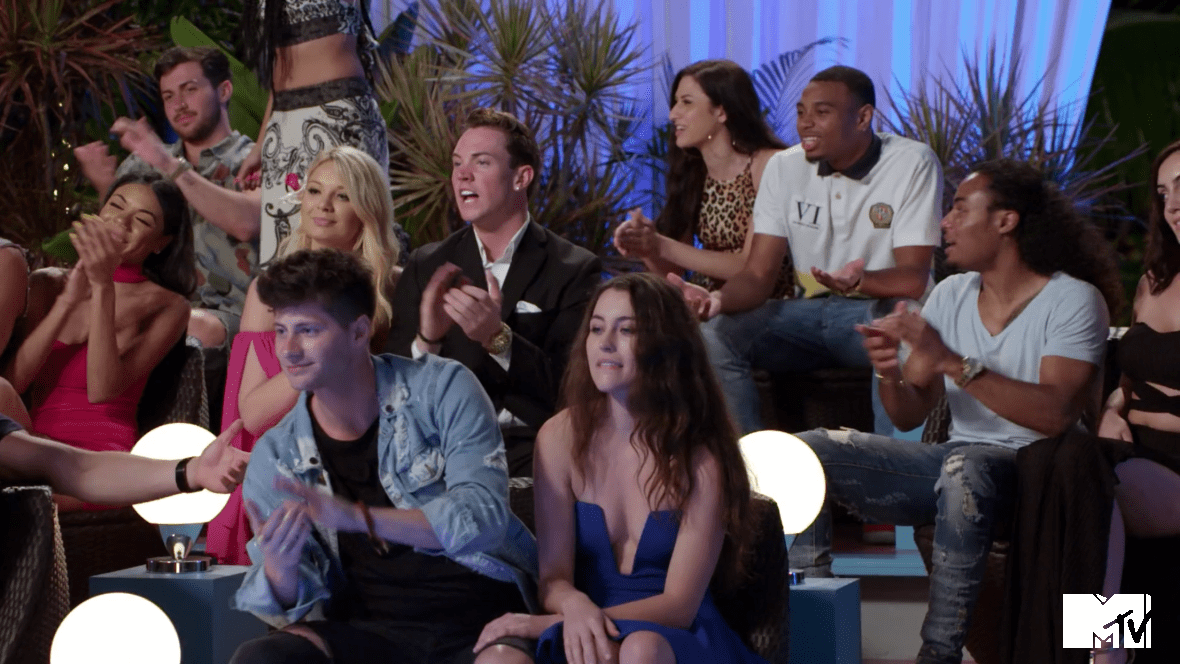 Are You the One? may be many things, but above all, it’s a veritable PSA on communicable diseases. In the season’s opening episodes, the cast seems to have lost, and then slowly regained, their voices to the same suspiciously horse throat. The mysterious affliction was no doubt the work of whatever virus was being passed around the house. What with all the kissing and all.

In their defense, the high frequency with which their spit is swapped means that the contestants are playing the game right. Each member of the 10 men/10 women house has been paired with a member of the opposite sex as their “perfect match,” but nobody knows which match is which. With every week, they must test their connections (via WHATEVER means necessary) in order to uncover their one true match. This season, the show also sports a new “Fate button” feature, which sends groups of four out of the house on dates at random. With the current season of “no match” couples, drunken brawls, and hookups (oh my!) coming to a close, here’s a dose of who I’ll miss most once it finally wraps.

Though no sane human should ever want to admit this, I kind of have to admire Bria. (I said kind of. KIND OF.) If nothing else, the woman knows what she wants. She and Zak are a confirmed “no match”? No big. Zak makes a habit of making out with multiple other ladies? Details. From the first time they made out in the house, Bria had eyes only for Zak. Heaven help whatever – or whomever – stands in her way.

With Zak’s lady ADD bouncing from Nutsa to Morgan to Cali at neck-breaking speed, it’s a minor mirale that Bria’s rage has yet to truly (re-) bubble to the surface. After all, she has a bit of an anger issue. Even sweet-yet-simple-yet-oh-so-muscle-bound Daniel is absolutely terrified of her.

Of course, the four open pints of Ben & Jerry’s on the table during her scene with Brett weren’t lost on me. Perhaps Bria’s finally found her way to an (ice cream-flavored) inner zen.

“In my defense, Daniel likes to kiss everybody” – Kenya

When objectively beautiful man-child Tevin zeroed in on Kenya, I was a little confused. Maybe not as much as fellow Tevin-admirer Jasmine (who, like her namesake, demands to be treated like a princess…siiiigggh), but confused all the same. And when Kenya, in turn, casually made out with cast “smooch villain” Daniel, she really pushed my brain to its breaking point. But even before the couple was shipped off to the ‘honeymoon suite’ of perfect matches, never (well, ok, rarely) to be seen again, they were noticeably absent from the bulk of the season. Indeed, barring one mild Jasmine-shaped speedbump, I have no idea what the two got up to in Hawaii. The only logical conclusion is that the two are actually…ugh…happy…and therefor lacking the drama that excessive screen time demands.

If you need me, I’ll be stalking their Instagram accounts (well, Tevin’s – Kenya’s is private) to see if the two are still together.

“Supporting the president can be a complete c***block” – Cam

Nothing I’ve seen on reality TV lately has been more telling of the current political climate than the number of times the president’s name came up on the AYTO premiere. Cam, who pretty much immediately set his sights on ‘hopeless romantic’ Kayla, quickly felt compelled to disclose his pro-presidential views. And while starry-eyed Kayla was just as quick to glaze over the political gulf between the two, that wasn’t her only concession. “I may be a Republican, but I would deeefffinitely say that Democrats are better in bed,” boasted a grinning, weirdly self-deprecating Cam.

However, a recent matchup ceremony reveal paved the way for trouble in the Cam/Kayla paradise. And now that the two are free to ‘pursue other relationships,” they’re back in the mix as a source of all-new drama.

Here’s hoping that a Cam/Jasmine kiss causing Kwasi to pretty much literally lose his mind was only the beginning. There’s now simply no telling who he’ll hook up with next.

“You’re way too immature for me. But we can be friends” – Samantha

Samantha showed up to AYTO with her rear barely concealed by a pair of booty shorts, belly button ring on full display, and an accessory that looked suspiciously like a fanny pack. But despite her questionably choices in the fashion department, Samantha is my clear pick for the only half-normal person on this whole show. After immediately listing out some pretty solid questions for any potential suitor (Do you still live with your parents? Do you file your own taxes?), she proceeded to call out cast clown Lewis for the ridiculous clown he is. Yet somehow, from that shaky-at-best start, my favorite friendship in the house was born.

Watching Sam take a sweet moment to, say, counsel a clueless Lewis through his “breakup” with Asia (in which he felt the need to proclaim “I AM NOT ATTRACTED TO YOOOUUUU”) gave me all the warm fuzzies I’ll ever need. In return, his pep talk to her when Cali and Daniel’s dirty dancing rocketed into overdrive was just as touching. Forget romance. This non-couple coupling is hands down the most heart-tugging pair of the house.

New episodes of Are You the One? air at 10:00pm ET Wednesdays on MTV and are available the next day on demand