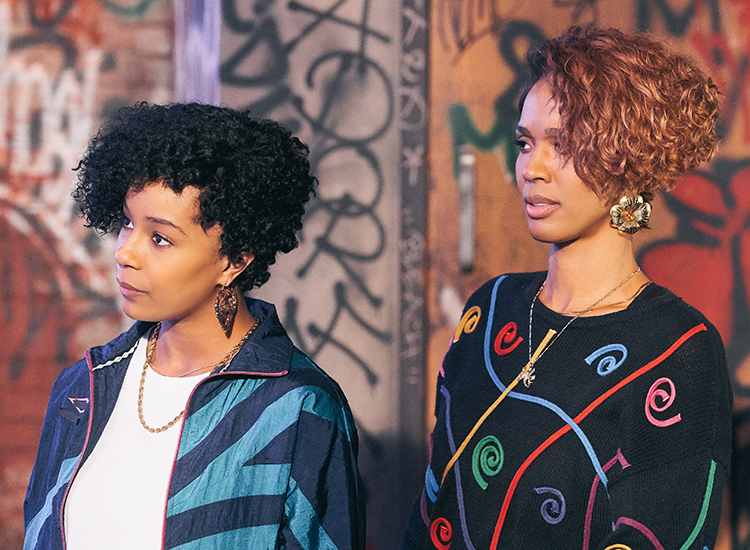 With risque, boundary-pushing songs like “Let’s Talk About Sex” and “None of Your Business,” Salt-N-Pepa walked so that Megan Thee Stalion and Cardi B could fly. But what’s perhaps most interesting about Salt-N-Pepa—the new Lifetime original movie based on the pioneering rap group—is that it largely avoids the more controversial elements of their music and instead focuses on the interpersonal dynamics between the members and their producer/ manager. To put it another way, it’s neither salty or spicy — it’s surprisingly sweet.

Framed around their reunion at the Hip Hop Honors in 2005, the movie quickly flashes back to 1985 when Cheryl “Salt” James (GG Townson) gets Sandra “Pepa” Denton (Laila Odom) a job as a telemarketer and they Forrest Gump their way around the margins of hip-hop's early years. Kid N’ Play answer calls (and act like fools) two cubicles down at their job, and Cheryl’s boyfriend Hurby “Luv Bug” Azor (Cleveland Berto) has industry connections and ambition, as he plots to launch their career with a manufactured diss track. It works.

Directed by Mario Van Peebles (New Jack City), Salt-N-Pepa is more on the Movie-side of Lifetime Original Movie, with a cinematic look, bright, era-appropriate clothes and color schemes, and smooth long takes. Like many biopics, many of the best scenes are the groundbreaking moments behind the music, as when they recite “ooh baby baby” a few times, giggle at the lyrics, and step into a bathroom to record their verse for the Top 20 hit “Push It.”

This being a Lifetime Movie, there’s some relationship drama, as Hurby cheats on Cheryl and tries to rip off Sandra in her contract (Cleveland Berto gets to play the trifling boyfriend and the sleazy music biz exec all in the same role). However, the emphasis throughout is on the relationship between Salt and Pepa, which starts to sour when Cheryl turns her focus to Jesus and Sandra revels in the trappings of wealth. Although neither of them look quite like their real life counterparts, Townson and Odom have terrific chemistry and their progression from strangers to coworkers to close friends feels authentic and organic.

If you’re craving a trashy, poorly-made Lifetime biopic to hate-watch, this 3-hour movie is probably not for you. But if you’re looking for a fascinating trip back to the early years of hip-hop and a behind-the-curtain glimpse at a truly iconic and groundbreaking rap group, Salt-N-Pepa has the perfect blend of ingredients.

Salt-N-Pepa airs Saturday, Jan. 23 at 8pm ET on Lifetime, followed by the Salt-N-Pepa Interview Special at 11pm ET, hosted by Loni Love. Use the link below to sign up for Sling Orange with Lifetime.

get lifetime on sling
caret