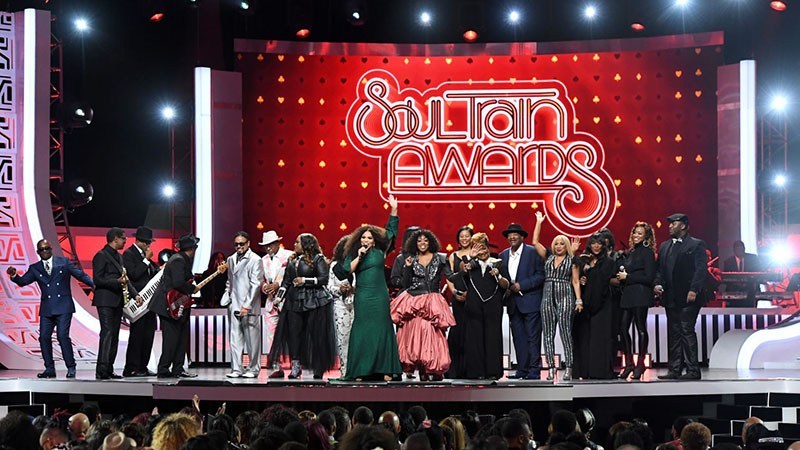 Erykah Badu is undeniably the queen of neo-soul. For a long time running, she was also the queen of the Soul Train Awards.

From 2015-17, Badu hosted the iconic music awards show. Even when that run ended, she was awarded the much-deserved Legend Award at last year’s ceremony. Fittingly, her send off was a sprawling medley of all her best songs. So where do we go as we head into the 2019 edition of The Soul Train Awards? Last night’s BET broadcast is now available on Sling On Demand, so here’s a preview of what to expect this time around.

Gina and Pam are back! While Badu left big shoes to fill, Tisha Campbell and Tichina Arnold slid in quite comfortably hosting last year’s awards. The dynamic duo from one of the best shows of the ’90s (if not all time) rocked their first hosting gig. Unsurprisingly, they did an elaborate homage to some of the best jams of the ’90s; more surprisingly, they nailed every elaborate ’90s dance step you can imagine. It’s great to have these two back, here’s hoping they do an early 2000s homage this year.

The past two award shows have predicted what was to come for the Grammy Awards the following February. In 2017, Bruno Mars won Soul Train Album of the year with 24K Magic. The next year, H.E.R. won the same award for her self-titled debut album. Both albums went on to win Best R&B Album in their respective years at the Grammys. Will this year continue the trend? Here are this year’s contenders for Album/Mixtape of the Year.

If it’s based on popularity, expect Lizzo’s breakout album to easily take the cake. Critically speaking, H.E.R. should go back-to-back at the Soul Train Awards, with Ella Mai playing a sneaky underdog.

Get ready for another year of great performances

If you’re waiting for all-time legendary artists, this year will not disappoint, as Boyz II Men and Morris Day and The Time will both grace the stage. If that wasn’t enough, the night will culminate in an epic Soul Cyper including Anthony Hamilton, Carl Thomas, Erykah Badu, Keyshia Cole, Le’Andria Johnson and Robert Glasper. To prep, check out last year’s Soul Cypher.

Don’t be surprised if Chris Brown, Drake, Beyonce, and Lizzo take away some hardware home, as they lead all artists with eight (Brown), seven (Drake) and six nominations, respectively. Check out the rest of the nominees here. However, the biggest prizes of the night are reserved for The Legends Award and the fifth annual Lady of Soul Award. Last year, Erykah Badu and Faith Evans were the respective winners of those trophies.

This year’s Legends Award goes to five-time Grammy award-winners Jimmy Jam & Terry Lewis, who are responsible for the production on so many of those amazing Janet Jackson hits. Legendary Gospel artist Yolanda Adams will be honored as this year’s Lady of Soul. Those are about the only sure bets, as this year’s awards air live so you’ll never know what can happen.

The 2019 #SoulTrainAwards hosted by BFFs Tisha Campbell and Tichina Arnold come to you LIVE! Sunday, November 17 8/7c on @BET and @BETherTV… Make sure to watch, you never know what may happen! pic.twitter.com/V1MXuKrirQ

The 2019 Soul Train Awards is now available through Sling On Demand courtesy of BET.