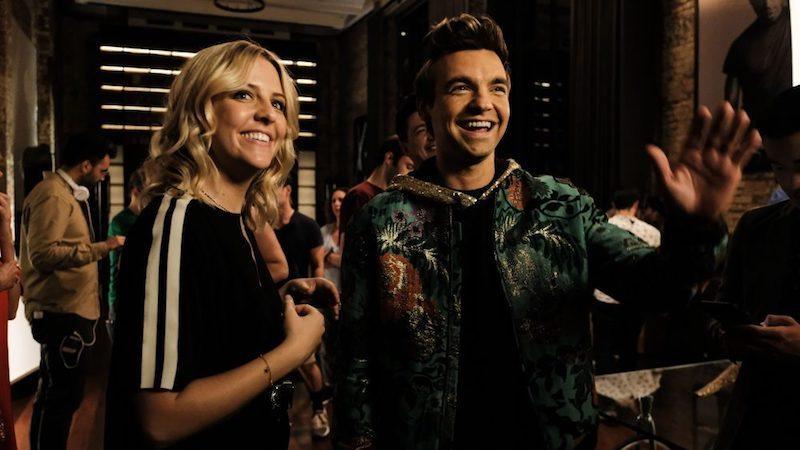 The streets of New York City are paved with the broken dreams of millions of Midwesterners who moved there to find fame and fortune. For those who aspire to become a famous performer, the daily grind can be brutal. Your ego takes a pounding as day after day you’re rejected for being too this or too that or, worse, simply not good enough; all the while you’re trying to make ends meet by waiting tables or something truly demeaning. It can be soul crushing. Now imagine that level of disappointment exacerbated by your kid brother becoming an overnight sensation on the back of a dopey pop song called I Wanna Marry You at Recess. Good lord the indignity. That, in a nutshell, is the premise of The Other Two.

The show stars Drew Tarver and Helene Yorke as twenty-something siblings Cary and Brooke Dubek, both of whom live in New York. He’s a waiter/aspiring actor; she’s a washed-up dancer-turned-condo salesperson. He’s super excited about the prospect of getting cast for a commercial as Man at Party Who Smells Fart; she’s sleeping on an air mattress in one of the units she should be selling because she just broke up with her boyfriend.

Meanwhile, their 13-year-old brother ChaseDreams (Case Walker) is in town for an appearance on Kathie Lee & Hoda talk about his hit single I Wanna Marry You at Recess. The origin of the kid’s name is as stupid as his feeling the need to explain what it means.

In tow are Chase’s mom, Pat (Molly Shannon), and manager, Streeter Peters (Ken Marino). Shannon and Marino are perfectly cast: she as the aspiring stage mother from Ohio whose NYC shopping spree culminates in a studded leather jacket from The Candy Store; he as the slimy, obsequious, insecure, oblivious manager who over-coaches his client not to offend anyone. When asked while on a red carpet to choose between Israel and Palestine, “I think they’re both dope and should just keep being true to themselves,” whereupon Marino leans in to add “The situation’s very complicated.”

Brooke and Carey’s second-banana status is even driven home the titles of each episode. Despite them being the stars of the show, each title references something that Chase is doing: …Goes to a Premiere, … Gets a Girlfriend, …Turns Fourteen.

As Chase becomes progressively more famous, his siblings slowly turn into terrible people, the kind of nightmare hangers-on that seem to inevitably end up with their own basic-cable reality shows. Brooke wastes no time in finagling the role of being Chase’s assistant, while Cary uses the connection to give his career a boost and becomes the kind of person who won’t stop mentioning his appearance on Watch What Happens Live. His ego gets so bloated at one point that a date heads home early explaining “It feels like you a month ago would’ve made fun of you now.”

The Other Two is the creation of Chris Kelly and Sarah Schneider, who were writing partners at Saturday Night Live for several years before being named co-head writers for the 2016-17 season. Kelly went on to critical acclaim for his biographical film Other People (he’s, like, really into others) starring Jesse Plemons as a man who leaves New York after his breakup with his boyfriend and has to move in with his conservative father.

If you stick around for The Other Show, where Kelly and Schneider chat with the show’s stars about each episode, it’s clear just from looking at them that this show is deeply personal. They manage to do a lot of deep dives into the corrosive nature of celebrity and its effects on those adjacent to celebrity, as well as having a deceased father, the trials and tribulations of being a sibling and the realities of being a gay man. Fear not, however, as The Other Two does all this without being preachy or maudlin. True to their mission as comedic writers, everything is in the service of getting a laugh.

Season 1 of The Other Two is available on demand on Comedy Central.