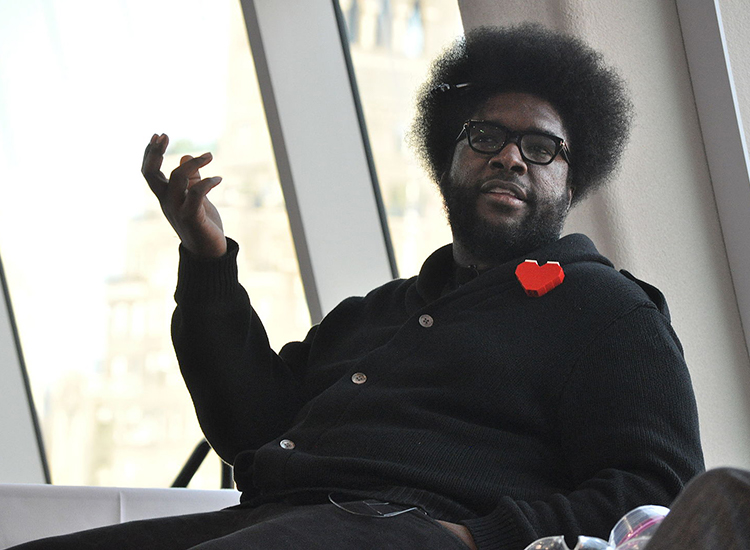 Does everyone have those small Pyrex bowls just hanging around the kitchen waiting to be used in a TV cooking segment? If the famous faces Ahmir "Questlove" Thompson gathered together Thursday for a virtual potluck for the Food Network is any indication, the answer is yes. Saturday Night Live’s Kenan Thompson had all the ingredients measured out in those cute dishes for his “One Pot Turkey Spaghetti,” as did Questlove’s Roots band member Black Thought for his Asian slaw. However, actress Olivia Wilde maintained her down-to-earth persona by eyeballing the proportions for her poached salmon. She really is just like the rest of us.

Questlove’s Potluck — the latest pieced-together special to come out of quarantine — collected a handful of celebrities to show off their favorite easy-to-make recipes and allowed them to trade quips back and forth with the Tonight Show bandleader/DJ/author from the comfort of their own kitchens, in an effort to recreate his famed dinner parties and raise money for America’s Food Fund. Despite some spotty internet connections and the persistent awkwardness of video chatting, the hour maintained a casual feel and offered up a distraction from another lonely night at home.

Questlove held court next to a stone fireplace that looked straight out of a deserted country cabin, while Eva Longoria drank out of a wine glass the size of her face, Roy Wood Jr. showed off the contents of his pantry and declared peanut butter “the bacon of the pantry,” Maya Rudolph crafted a homemade cocktail and laughed manically at an overripe banana (you had to be there), Zooey Deschanel whipped up a risotto cake while new beau and Property Brothers star Jonathan Scott showed off his magic skills with a disappearing cherry tomato, and Patti LaBelle effortlessly fried branzino in a golden butter sauce.

But it was comedian and actress Tiffany Haddish who stole the show with her oil-less “She Ready Chicken,” as in “She ready to eat this chicken.” She summed up the key to not only filling stomachs but also souls by instructing viewers to smile while cooking. That way the energy goes into the people eating your food, even if the taste is lackluster.

Pretty good advice to take even after this pandemic ends.