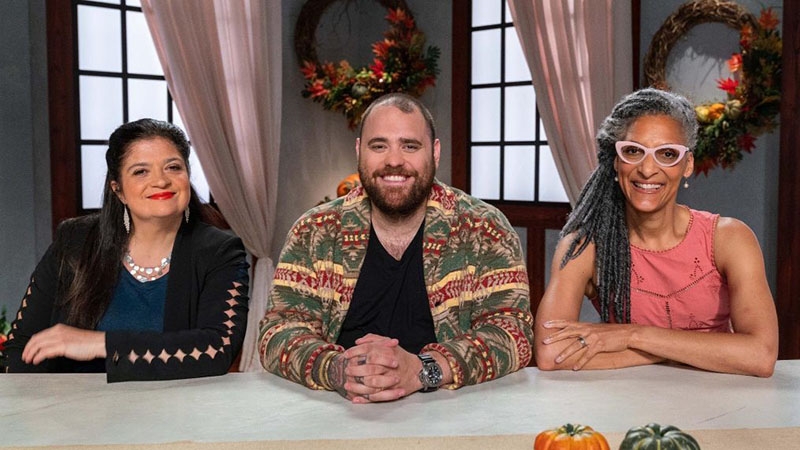 With apologies to those who have a sweet tooth for Halloween candy, Thanksgiving is the ultimate food lovers’ holiday. In fact, food is central to the traditions of the holiday; Thanksgiving gives us a valid excuse to make like a turkey and get stuffed.

Naturally, there are a ton of food-themed Thanksgiving specials airing this time of year, especially on Food Network and the Cooking Channel (the two networks are promising “40 percent more” Thanksgiving content than last year). Whether you’re in the mood for a competitive cooking show or are looking for inspiration for your own holiday get together, here’s your guide to the best Thanksgiving programming on Sling TV.

The premise behind Ultimate Thanksgiving Challenge isn’t quite as obvious as it sounds. Sure, contestants will be whipping up dishes that touch on Thanksgiving but honestly, “Challenge” is the key word in the show’s title. For instance, in the Season 2 premiere, the show’s six contestants must use a budget item to create their Thanksgiving appetizer. Judged by Alex Guarnaschelli, Carla Hall and Christian Petroni and hosted by Giada De Laurentiis, Ultimate Thanksgiving Challenge puts a fun holiday twist on the competitive cooking show. The Season 2 finale premieres Sun. Nov. 24 at 7pm ET on Food Network; the first season and previously aired episodes are all available on Sling On Demand.

Hosted by Sunny Anderson, the hour-long special Thanksgiving Pie Fight spotlights one of the hottest new trends in the world of food: Pie Art. The creativity on display is astonishing; for proof look not further than the contestant who makes a “Merry-Go-Round apple pie with a hot toddy filling.” If you like your Thanksgiving plate to look a little more artistic, check out Thanksgiving Pie Fight On Demand now.

Similar to Thanksgiving Pie Fight, Macy’s Thanksgiving Cake Spectacular also showcases the culinary and artistic skills of four of America’s best bakers. The contestants take their inspiration from the balloons and floats featured in the iconic Macy’s parade, with the winner taking home $10,000. Judges include Buddy Valastro, Susan Tercero and last season’s winner Timbo Sullivan. You can watch both this year’s special and last year’s Martha Stewart-hosted edition On Demand.

And finally, Food Network’s long-running show The Kitchen will be doing a special live episode the weekend before Thanksgiving to get you all prepped for the big day. To get you ready, the episode “Thankful Thanksgiving” is already up On Demand. However, you won’t want to miss the main course when Sunny Anderson, Alex Guarnaschelli, Katie Lee, Jeff Mauro and Geoffrey Zakarian are joined by Alton Brown for a two hour special that food lovers won’t want to miss.

For more on Food Network’s Thanksgiving programming, along with a host of recipes, visit their official website.