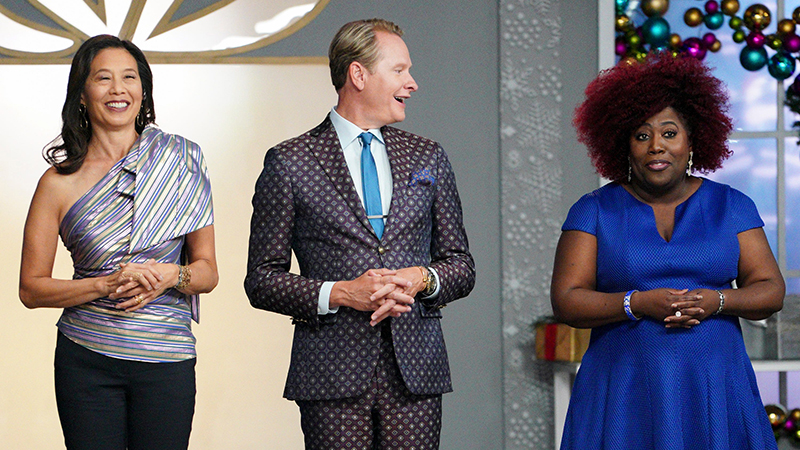 With Thanksgiving already in the books, the time has come to surrender to all things Christmas, if you’re into that kind of thing — or even if you’re not. To get into the spirit of the season, you can while away the hours on your couch watching people tie themselves in knots trying to out-bake, out-cook, out-decorate, or out-wrap each other. Here’s a look at the best holiday cooking shows and competitions on Sling TV.

Christmas Cookie Challenge
On Demand
Food Network
Former New England Patriots defensive back Eddie Jackson is your host, while Pioneer Woman Ree Drummond, Cutthroat Kitchen winner Dwayne Ingraham, and cookbook author Gesine Prado are the judges as a handful of the country’s best cookie makers come together for a series of challenges to determine once and for all who will wear the cookie crown.

Holiday Baking Championship
On Demand/ New episodes air Monday at 9pm ET
Food Network
Ten bakers from across the country battle it out in one competition after another — making edible place cards, apple cider donuts, desserts that look like Santa, a high-end Hanukkah gelt. One baker gets sent home each day, with the last baker standing walking away with $50,000. Holiday Baking Championship is hosted by Bobby “son of Paula” Deen, with the Ace of Cakes Duff Goldman, Nancy Fuller of Farmhouse Rules, and former cover girl and bestselling cookbook author Lorraine Pascale serving as judges.

Holiday Cookie Builds
On Demand
Cooking Channel
Brenda Nibley and Alisha Nuttall lead their Gingerbread Dream Team as they conceive of and construct some of the most ambitious and delicious cookie creations imaginible, running the gamut from a five-foot-tall nutcracker to a six-foot-long edible Main Street decked out for Christmas.

Wrap Battle
On Demand
Freeform
Former Queer Eye Carson Kressley and artisanal paper boutique owner Wanda Wen are joined by a steady stream of celebrity judges as they weigh in on the gift-wrapping mastery of nine contestnats vying for $50,000. With comedian Sheryl Underwood as host, this show is way more fun, and dramatic, than it has any right to be.

Holiday Gingerbread Showdown
On Demand/ New episodes air Sundays at 10pm ET
Food Network
Host Paige Davis, along with three judges — MasterChef Canada winner Mary Berg, celebrity chef Maneet Chauhan and bakery owner Adam Young — preside over the proceedings as the best gingerbread artistes in the land throw down to see who can make the most stunning gingerbread creations, with $25,000 serving as a powerful motivator.

Outrageous Holiday Houses
On Demand
HGTV
Join Lance Bass of NSYNC fame for this special as he tours the country to visit the homes of some of the most audaciously decorated houses inhabited by some of the world’s most obsessive Christmas fanatics. First stop: the home of Property Brother Drew Scott and his wife Linda.

Ellen’s Game of Games Holiday Edition
Thursday, December 12 at 8pm ET
NBC (In select markets)
You know all those wackadoo games Ellen DeGeneres plays on her daytime talk show? She’s turned them all into a primetime game show — and now she’s given them a holiday twist. Lucky folks in the studio audience will be picked at random to come down and the stage and take a crack at winning the grand prize: $100,000.