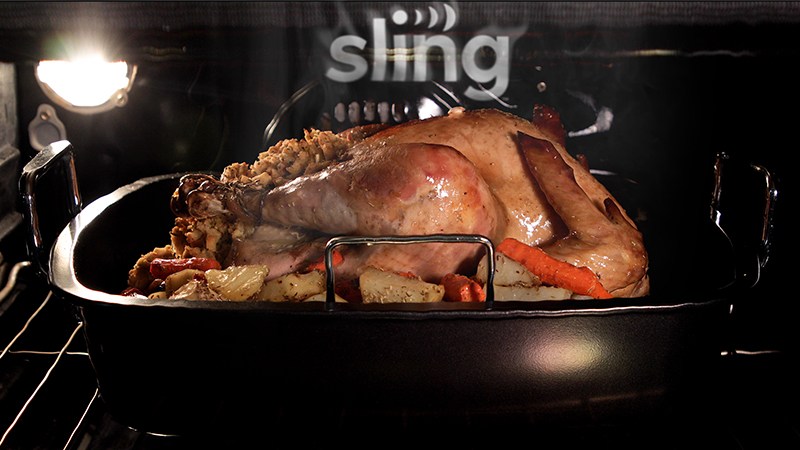 Thanksgiving is a far superior holiday to Christmas for a variety of reasons. It’s non-denominational, there are no presents to buy and there are a cornucopia of foods we don’t normally eat. But there’s one other thing that really sets Thanksgiving apart: You can have the TV on pretty much all day without anyone beefing. Sure, you gotta pull the plug long enough to eat dinner, but other than that, the runway is clear. That’s why it’s so important to have a plan, a roadmap of what’s ahead. And so we present your 2019 Sling Thanksgiving Viewing Guide — from morning to night, we’ve got you covered, whether you wanna watch sports, comedies, classic movies, or specials like…

The 93rd Annual Macy’s Thanksgiving Day Parade at 9am ET on NBC
Regardless of what scratches your itch on a day of TV viewing, it’s Thanksgiving, which means you are required — per the Constitution — to start your day with the Macy’s Thanksgiving Day Parade. Expect two hours of terrifyingly gigantic balloons, B-list celebrities, under-employed Broadway hopefuls, and random marching bands from around the country as they work their way down Central Park West, over to 6th Avenue, and then down to Herald Square.

Chicago Bears vs Detroit Lions at 12:30pm ET
These NFC North rivals occupy the bottom half of their divisional standings and both are struggling with injured QBs. The Lions’ Matthew Stafford is battling broken bones in his back and could be out for the remainder of the regular season. Meanwhile, Mitch Trubisky may or may not be dealing with a bum hip, depending on who you believe and your inclination toward conspiracy theories. In any event, Trubisky got benched during the team’s Week 11 loss to the Rams. Is this a sexy matchup? No, but it’s still football on Thanksgiving, so enjoy it.

Related: Here are our picks for the best Thanksgiving Day performances by position

Memphis Tigers vs North Carolina State Wolfpack at 4pm ET on ESPN2
Hopefully James Wiseman will be back from his absurd suspension in time to enjoy the holiday with his teammates. The top recruit in his high school class, Wiseman was leading Memphis in scoring (19.7) and rebounds (10.7) at the time of his unscheduled vacation. Led by CJ Bryce’s 20.3 ppg and 8.5 rpg, the Wolfpack are off to a pretty good start following a loss in their opener.

Battle 4 Atlantis at 6:30pm ET on ESPNU
How do you get eight college teams to ditch their families for Thanksgiving? Easy, host a tournament in the Bahamas. North Carolina, Oregon, Michigan, Gonzaga, Iowa State, Seton Hall, Alabama, and Southern Miss will all be on hand. Game 7 tips off at 6:30 pm, with the loser of Michigan-Iowa State facing the loser of UNC-Alabama.

New Orleans Saints vs Atlanta Falcons at 8pm ET on NBC
The Falcons broke a 6-game skid to stun the Saints 26-9 in Week 10, as the Atlanta pass rush took down Drew Brees 6 times and kept him out of the end zone all day. The Saints have way more at stake in the rematch, but the Falcons have nothing to lose and a fair amount of talent, which makes them very dangerous.

Comedy Central’s Holiday Comedy Marathon
As their name suggests, Comedy Central is in the business of delivering laughs, and they are bringing the funny this Thanksgiving. First, there’s five hours of Christmas episodes from Michael Scott and his staff at The Office. Groundhog Day — in which Bill Murray must live the same day over and over again until he gets it right — is so funny and has such philosophical depth that the late Yale classics professor Harold Bloom wrote about it. Next, it’s John Candy and Steve Martin in a holiday masterpiece that is also among the all-time great road films: John Hughes’ Planes, Trains & Automobiles. Finally, it’s the raunchiest, funniest, most heartwarming R-rated Christmas movie ever made, Bad Santa.
The Office Christmas Episodes from 9am – 2pm ET
Groundhog Day at 2:05pm ET
Planes, Trains and Automobiles at 4:35pm ET
Bad Santa at 6:45pm ET