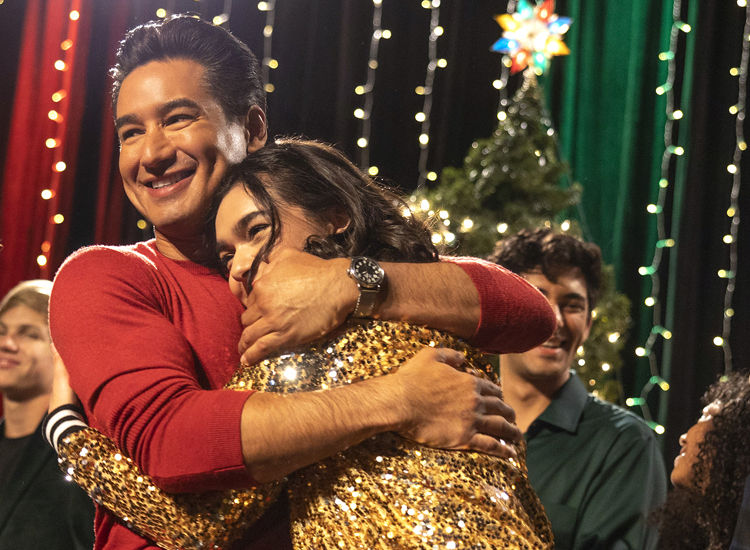 Who couldn’t use a little Christmas cheer right about now? In 2020, even the staunchest Turkey Day supporter can appreciate the early onslaught of twinkling lights, brightly-wrapped packages topped with glittering bows, a sprinkling of snow, and mistletoe kisses.

Leave it to Lifetime to deliver all this and more during the network’s It’s a Wonderful Lifetime campaign, which kicks off Friday, Oct. 23 and doesn’t stop until Santa has nearly arrived at your chimney. 30 heartwarming movies make up this year’s roster—and not a pandemic storyline among them. Come for the escapism and stay for even more escapism.

Here’s our guide to all 30 movies on Lifetime’s Christmas list. Open it with all the fervor and childlike wonder of a Christmas morning and watch with Sling Orange and/or Blue.

What to expect: It’s like The Cutting Edge without the exhausting quest for Olympic gold and a toe-pick montage, as a figure skating queen finds love with a former hockey player while trying to save her city’s outdoor public skating rink.

What to expect: Almost everything actress/comedian – and now executive producer – Tiffany Haddish turns out induces scalable laughter, so expect more than a few heartly chuckles from this rom-com about a reporter who tries to uncover the truth behind man-about-town Erik Gallagher’s claims that all of the gifts he gives actually come from Santa Claus.

What to expect: A sexy dude who lives every day of the year as if it’s Christmas? What a holly jolly catch! That’s how an overworked reality TV producer starts to feel as she captures his mysterious lifestyle for a holiday-themed series.

What to expect: When a 70-year-old letter to Santa, along with a valuable coin, turns up inside a copy of A Christmas Carol left at a craft store by an unsuspecting but fetching donor, the shopkeeper sets out on a mission to find the original owner before Dec. 25.

What to expect: If an entire neighborhood choosing to forgo an annual, beloved tradition of decorating for the holidays spurs a woman to find romance while creating a new Christmas custom, do we call those residents scrooges or cupids?

What to expect: So many questions on this one: What kind of parents leave their kids home with a babysitter – even if it is a close relative – two weeks before Christmas? How did Aunt Rebecca lose touch with her childhood best friend Drew in a social-media obsessed world? What activity constitutes the 12 Days of Christmas? Are Rebecca and Drew going to scrounge up 10 lords a-leaping to convince her niece and nephew that Santa exists?

What to expect: A travel influencer begrudgingly accepts an assignment to cover a 100-year-old, small town Christmas parade in New Mexico where she happens upon a high school music teacher who helps her fall in love with the holiday again.

What to expect: They say if you want to be happy, you should look outward at what you can do for others. That’s exactly how Chloe intends to brighten her holiday spirit. When she is matched up with a veteran who recently returned home to drum up support for the town’s Army toy drive, the not-so-unlikely pair realize (at a fancy ball no less) they make a great team beyond mere philanthropic efforts.

What to expect: She’s a city girl with a travel blog. He’s a chocolate shop owner in the tony Danish village of Solvang. Their playful bickering is no match for the romantic locale – voted Most Christmassy Town in the USA.

Christmas on the Vine

What to expect: Raise a glass to the wine aficionados who will not only save a town’s beleaguered Christmas spirit, but also a group of local winery owners from a greedy conglomerate.

What to expect: Who had vintage red convertible on their Christmas Bingo card? Anyone? Anyone? Ashely returns to her small hometown to care for her ailing uncle only to find out he sold her mother’s flashy wheels. She turns to the equally ravishing family attorney for help to locate the car so she can reignite her mother’s tradition of handing out gifts to the community from the backseat.

What to expect: Newspapers across the country need a Christmas miracle to stop hemorrhaging advertisers and subscribers. If only a few well-placed holiday-themed articles could turn the industry’s fortunes around. That far-fetched scenario becomes a reality for Jackie when she accepts a position at a small publication in Alaska. Emboldened by her success and newfound love with the son of the paper’s former owner, she resists her old boss’ petty moves to take over.

A Taste of Christmas

What to expect: Natalie vows to open her cousin’s Italian restaurant on Christmas Eve as originally intended in a three-day time frame despite the objections of the grumpy yet gorgeous head chef. Things heat up in the kitchen in more ways than one as the two race against the clock to serve their lonely holiday guests.

What to expect: Mario Lopez’s dimples return to acting as he portrays a widowed dad who moonlights as a delivery driver during the holidays just to avoid the Christmas tree-shaped hole his wife left behind. Fed up with his bah humbug attitude, his daughter and sister set him up with an online dating profile in hopes of finding him a yuletide connection.

What to expect: Santa has elves and Christmas party planners have Megan. If this savvy freelance assistant can save a holiday soiree and impress her crush, her Christmas will be a success. But what if the man of her dreams isn’t Mr. Right?

What to expect: Brandon Walsh and Sabrina? Fans of beloved ‘90s series Beverly Hills, 90210 and Sabrina the Teenage Witch will ship the coupling of Jason Priestly and Melissa Joan Hart in this holiday rom-com. There’s a little Sleepless in Seattle, Hope Floats and Sweet Home Alabama in this tale about a relationship podcaster who is successful at solving the romantic problems of others while hiding her own failures in the love department. A family visit to her hometown for Christmas and a run-in with a local firefighter could change all that.

What to expect: The only characters to get a sequel from the Lifetime Christmas movie fairies, Jacquie Liddle returns to plan her perfect Christmas destination wedding to Tyler. If only her family knew how to stop meddling.

People Presents: Once Upon a Main Street

What to expect: Things get territorial on Main Street when Amelia Lewis and Vic Manning counter bid each other for a storefront Amelia knows will be the perfect spot for her year-round Christmas shop. In an effort to win the favor of the widowed owner of the property, both agree to take over his duties as decoration committee chairman for the “Battle of the Main Street” holiday competition and find working together isn’t as hard as it first seems.

What to expect: Competing realtors spend a week at a Christmas Inn hoping to nab the listing of the Erickson Farmstead. All is fair in love and listings.

Too Close for Christmas

What to expect: When Hayley accepts an invitation to spend Christmas with her sister’s new in-laws, her seemingly perfect holiday takes a turn when Luke, Hayley's brother-in-law's brother, unexpectedly shows up.

What to expect: Taking a cue from Before Sunrise and An Affair To Remember, a pair of college sweethearts flung on opposite sides of the globe promise to meet on Christmas Eve in two years. You know how the story goes: one doesn’t show and they awkwardly bump into each other years later – and somebody’s got some explaining to do.

What to expect: Ali Stroker made history in 2019 as the first performer in a wheelchair to ever win or be nominated for a Tony Award for her role in Oklahoma! She continues to smash barriers as the star of this rom-com where she plays a romance novelist struggling with writer’s block while spending Christmas at her favorite bed & breakfast. The B&B’s dashing new owner helps her meet her deadline by taking her mind off work with a smattering of snowy yuletide events.

What to expect: A wealthy widower enlists the help of the Santa Squad, who sends over out-of-work art teacher Allie, to bring the magic of Christmas back into the lives of his two daughters.

What to expect: Trying to impress your boss by spending your Christmas vacation making moves to acquire your hometown’s picturesque inn is one way to find love or annoy your family. Since this is holiday fare, the answer lies somewhere in the middle.

What to expect: You can always count on mom to play matchmaker during the holidays. Just like Santa, she has an inkling for who’s naughty or nice. When Hugo leaves his New York law firm with his best friend tagging along for a family Christmas in Milwaukee, his mom immediately finds a way for Hugo to just happen to bump into his old high school pal and secret crush. Sparks fly until Hugo is forced to decide if he’s willing to give up on love for a big promotion in London.

What to expect: A young Chinese-American architect returns to her rustic hometown in Maine where the legacy of her late grandmother – a local baking celebrity – looms large. Begrudgingly entering the town’s gingerbread competition allows Suzie to feel her grandmother’s presence at Christmas and puts her in close proximity to an old high school friend – who turned out to be a stone cold fox.

What to expect: A trip to Texas to reunite her daughters with their estranged dad for the holidays finds single mom Erin getting a Christmas gift of her own – a restaurateur named Mateo.

Christmas on the Menu

What to expect: Celebrated chef Josie Jennings meets up with her food critic nemesis at her mother’s new restaurant – a welcome holiday addition to the adorable bed and breakfast she spent her childhood in. Journalistically speaking, it’s completely unethical for food critic Tanner Rhodes to entertain a romance with Josie and review her Christmas Cuisine. It’s one or the other buddy!

What to expect: As a Christmas present to herself, Molly Cooper swaps houses (hers – a quiet farmhouse) with financier Patrick Kingston (his – a trendy London apartment). While Molly searches fruitlessly for love in the bustling city, she comes to rely on her regular correspondence with Patrick.

What to expect: A chance encounter with a Hollywood actor on a Christmas tree lot? Is this a Taylor Swift song? The meet-cute between school teacher and single mom Addison Tate and Danny – the famous thespian hiding out in his hometown – propels the pair into activism mode as they try to keep her school from shuttering permanently right before Christmas Eve.

What to expect: Who says you can’t go home again? When a famous actress decamps to her off-the-grid hometown to wallow in her sorrows over being dumped right before Christmas, she finds solace in an easygoing new man. How long can she keep her whereabouts under the radar with a pesky reporter underfoot?

Lifetime is available to all Sling subscribers; click the link below to get Sling right now!