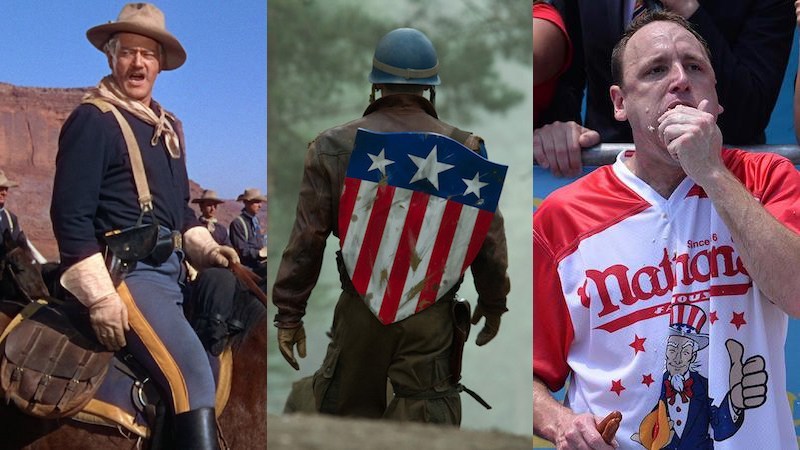 At some point on the Fourth of July, you’re gonna want to watch some TV. Maybe you’re the first person awake, or maybe you want to hide from your family, or maybe you have a banging hangover, or maybe you’ve just had enough. Doesn’t matter. The last thing you’re gonna want to do with these precious moments in front of the TV is go on a snipe hunt, so we present to you the Sling Subscriber’s clip-and-save Fourth of July TV Guide, where you can find the most patriotic programming from the crack of dawn until the stroke of midnight. Enoy!

Forget all that middle-highbrow Oscar-bait historical drama nonsense: this is Steven Spielberg’s masterpiece. With the big 4th of July weekend just around the corner, the last thing the mayor of Amity Island needs is a man-eating shark scaring away all the tourists. So when the partial remains of a young woman wash ashore, a power struggle ensues between the mayor and the new sheriff (Roy Scheider). When there’s no longer any denying they’ve got a problem on their hands, the sheriff teams up with a salty local fisherman (the amazing Robert Shaw) and a marine biologist (Ben Dreyfuss’ father, Richard Dreyfuss) to hunt the 30-foot killer down.

7:15am – 2pm: The Searchers, She Wore a Yellow Ribbon, and Fort Apache on TCM

Seven straight hours of Westerns starring John Wayne and directed by John Ford might be the ne plus ultra of flag-waving American cinema.

There is nothing more American than a bunch of dudes standing around seeing who can stuff the most processed meat into their faces. Watch three-time defending champ Joey Chestnut try to win his twelfth title overall and shoot for his own year-old record of 74 hot dogs in 10 minutes.

It seems like only yesterday this game was called bean bag toss and a cornhole was something very, very different. Times change.

For a very different look at the Civil War, there’s this Oscar-winning film about the 54th Massachusetts Infantry Regiment, the Union’s second African-American regiment and the Second Battle of Fort Wagner. The film stars Matthew Broderick as Colonel Robert Gould Shaw, and co-stars  Denzel Washington, Cary Elwes, and Morgan Freeman, who won his first Academy Award for the role.

Winner of the Oscar for Best Short Subject at the 1939 Academy Awards, it stars Ted Osborne as Caesar Rodney, the Delaware delegate that cast the decisive vote that led to the adoption of the Declaration of Independence.

For all of its homoerotic undertones (and they are legion), this is one of the great achievements in the history of Cold War agitprop. It’s a soaring declaration of American Exceptionalism, as well a love story and a case study in male bonding. This movie is so epic you may just leave the remote untouched when it starts up again at 5pm.

What’s more American than baseball? The first-place Cubs head to Pittsburgh for a 4pm dance with the Pirates, then the first-place Braves play host to Bryce Harper and the second-place Phillies. Get Mom and her apple pie in the mix and you’re hitting for the patriotic cycle.

Nicolas Cage is a historian who comes to believe that there’s an invisible map on the back of the Declaration of Independence that leads to a 2,000-year-old treasure that was last buried by the Founding fathers. Sounds legit.

Settle in for the first two installments of the most consistently excellent Marvel franchise. First, Chris Evans starts out as “just a kid from Brooklyn” but is magically transformed into a super soldier who leads a ragtag group of ex-POWs across Nazi Germany before taking on HYDRA and the Red Skull. Then Captain America finds that HYDRA is alive and well in the form of a superassassin known only as “The Winter Soldier,” a masked man with a metal arm and a one-track mind.

James Cagney stars in this musical based on the life of George M. Cohan, a.k.a. The Man Who Owned Broadway, who penned such patriotic numbers as Over There, The Yankee Doodle Boy, and You’re a Grand Old Flag. In the film the fictional Cohan looks back on his alleged birth on the Fourth of July and recounts the story of his childhood and rise to the top of the Great White Way.

Long before Hamilton captured the nation’s imagination, there was another musical about Second Continental Congress and their efforts to bring order to our nascent nation. The film stars Wlliam Daniels (the voice of KITT on Knight Rider) as John Adams, Ken Howard (The White Shadow) as Thomas Jefferson and Blythe Danner (To Wong Foo, Thanks for Everything! Julie Newmar) as Martha Jefferson. If you’re still awake, this ought to help.