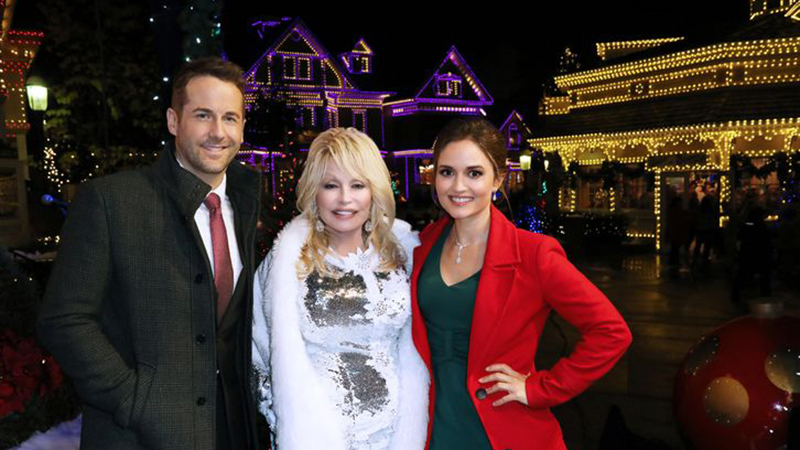 For the past decade, the Hallmark Channel has been dishing out holiday movies with the joy and generosity of Scrooge on Christmas morning. For the 10th anniversary of Countdown to Christmas, their stocking of original movies is overflowing with gifts, with a whopping 24 movies premiering during their signature two-month event.

Don’t have the Hallmark Channel? Get access to all three Hallmark networks and more channels by adding the Lifestyle Extra pack for just $5 per month.

Lauren Gabriel (Bure) leaves everything behind in Boston to embark on a new chapter in her life and career. But an unforeseen detour to the charming town of Grandon Falls has her discover unexpected new chapters – of the heart and of family – helping her to embrace, once again, the magic of Christmas.

Chenoweth is a youth choir director who needs to write a big song for a Christmas Eve show but is distracted when a boy with a golden voice joins her choir, which comes as a surprise to his widowed father (Wolf).

In the film, Rachel Lewis (McKellar) is a single mom and award-winning Broadway producer who learns investors have mismanaged her latest theatrical — a holiday extravaganza — into bankruptcy, forcing the show to close before it even opens. Dismayed, Rachel’s friend calls from Tennessee to tell her about an opportunity to produce a show for the 20th anniversary of the Smoky Mountain Christmas Festival at Dollywood. The only caveat? Rachel will have to work with Luke Hakman, Dollywood’s entertainment director who sees the holiday show as a stepping stone to become the park’s new general manager. As the pair make compromises to please their boss, Rachel and Luke realize love can come in the most unexpected of places.

When Brooke’s boyfriend, Ethan, breaks up with her just before the holidays, she agrees to go home with Joel, an actor who will pose as her boyfriend. She’s built up the ex-boyfriend to be the perfect guy and ‘Mr. Christmas’ but discovers Joel is Jewish and has never celebrated the holiday. What he lacks in experience he makes up for in enthusiasm and happily participates in yuletide festivities. When his secret is revealed, the family is eager to add Joel’s Hanukkah traditions into their holiday celebration but soon become suspicious about his true identity.

Lauren and her best friend Colleen think they have landed their dream job – giving people the best and most magical Christmas ever as their personal ‘Christmas Coaches.’ This holiday season promises to be their biggest ever when they land a royal client, the Anderson family, who has moved from England. When Lauren meets James, the eldest son, he wants nothing to do with planning Christmas as he’s busy negotiating a big acquisition for his father’s company. But Lauren won’t be thwarted in helping this royal family embrace the true spirit of Christmas. The more she prods James about their family holiday traditions the more he opens up. Sparks start to fly but she faces competition in the form of an old childhood friend and business colleague of James. Now Lauren must win his heart while giving the Andersons their best Christmas ever.

Career-minded Rebecca’s plans for Hanukkah go askew when a promotion opportunity comes up at work. When the company CEO asks Rebecca and her insufferable office mate, Chris – also her main competitor for the promotion – to plan the company’s Christmas party, she realizes they must overcome their opposing styles in order to succeed. Forced to work together on the holiday party, Chris learns more about Rebecca and her family’s Hanukkah traditions, while she also begins to see him in a new light. Although feelings slowly develop between the two, the ongoing competition over the promotion threatens to undermine it all.

When a New England Christmas decorating competition searches for the town with the most Christmas spirit, the Mayors of East and West Riverton go all out to get their towns to the top of the holiday heap.

When a morning show producer makes a New Year’s resolution to say yes more, she crosses paths with a confirmed Yes man who just might hold the key to her biggest story and to her heart.