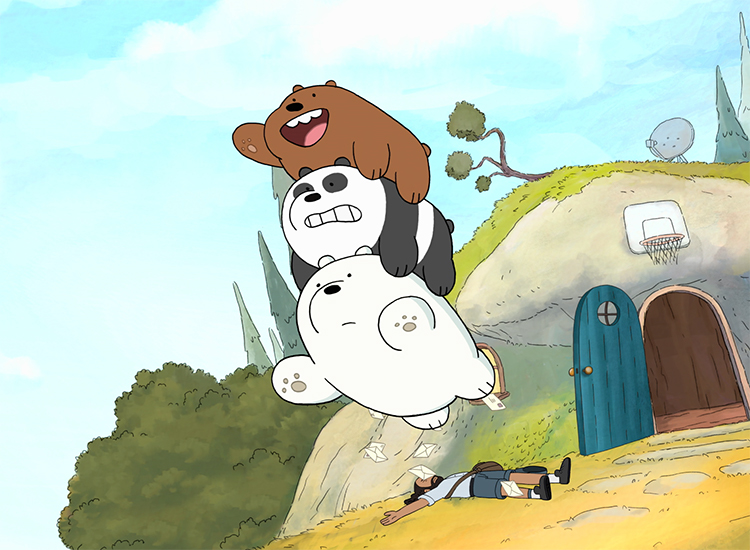 There’s great care put into We Bare Bears, both creatively and thematically. From the lush and adorable animation to its themes of non-traditional families and compassion, We Bare Bears was as funny as it was warm-hearted over the course of its four seasons and 140 episodes.

Although a spin-off focusing on the three bears as cubs is in development, We Bare Bears came to an end with the release of We Bare Bears: The Movie back in June. To mark the broadcast premiere of the movie on Cartoon Network this Labor Day, we emailed We Bare Bears creator Daniel Chong to ask about his creative influences, the show’s distinct comedic tone, and making art with a message.

Sling: How were your story choices influenced by the fact the movie serves as both a series finale for longtime fans of the show, as well as a possible introduction to a whole new audience?

Daniel Chong: To clarify, we actually didn’t know the movie would be the end of the series until mid-way through production, so we didn’t conceive the movie to have any closure. However, by writing such a big and ambitious storyline for the movie, we inevitably changed the whole world of We Bare Bears at the end of the movie. So even when we found out late that we had reached the end, it turns out, this worked as a fitting finale for our series. Maybe we weren’t able to resolve every aspect or question in the show, but we certainly thematically gave closure for the Bears and their ongoing struggle to fit in with human society. We were very conscious too that the movie would both work as a standalone movie for new fans, but also reward fans who knew the show well with a brand new experience we’ve never explored.

The animation is distinct, but has traces of a lot of different styles. Artistically, who would you cite as your 3 most important influences?

From a writing standpoint, we meshed a lot of the mundane slice of life comedy of Seinfeld with the modern day hipster/tech explored in Broad City. From an Animation standpoint, Aardman’s Wallace and Gromit, Charlie Brown animated specials, and Classic Disney Animated movies served as inspiration.

There’s a very peculiar comedic tone to We Bare Bears. When developing the show, did you create it with certain voices in mind? Ice Bear in particular seems to have a similar deadpan style to Dimitri Martin.

Tone is acquired very intuitively, but I think a lot of it was formed in the writing/storyboarding between me and story artist Madeline Sharafian. Together we worked on the first couple episodes together, and we spent a lot of time in edit trying to find the sweet spot tonally for the show.

Ice Bear was always a voice I had in my mind—Demetri was not the initial inspiration. But when he came on board, he inhabited the personality perfectly as if it was always meant to be.

Along with its funny tone, the movie has some relatively heavy themes about prejudice, acceptance, and non-traditional families. How do you try to make these important issues more digestible to kids?

Messages will always have to be hidden within a compelling story and characters, and something that will function even without the message being understood. The best you can hope is that once the young audience is entertained, they can look back and see that what they saw has parallels to the world around them, and they can contextualize the metaphor. They will have to do work to align the pieces and what represents what, but hopefully it’s a challenge that excites them and makes them think.

The movie (and the show) also has some really great moments around the bears’ failed attempts to become social media celebrities. Do you feel a sense of responsibility to talk about online issues, since they’re more specific to the younger generations?

I never took it as a responsibility — I just wanted to place a show in the modern world, and to not feature social media would’ve felt disingenuous. The desire to fit in, be understood, or even be famous can exist in any period of time. But it’s all so heightened and more complex than ever in this internet age, which justified [the choice] to place the show in current day.

Having lived there, I feel like you really capture the spirit of San Francisco. How do you bring such a unique city to life with animation?

It helps that many people on the crew also have lived in Northern California, so the artists themselves have all contributed to the authenticity from their experiences. But more than anything, the thing I wanted represented within the visuals of the city is the diversity of people. Making sure all the random people in the background are diverse and balanced is super difficult, and takes time to pick who goes where. But it was a detail my crew and I cared a lot about, and we made the effort to get it right.

If nothing else, We Bare Bears proved that bears are as stackable as a can of Pringles. What other animals should attempt stacking?

I’d like to be optimistic and think that any animal could make it work. Maybe not porcupines.

What’s the status of the We Bare Bears spin-off and what else should your fans be looking out for?

It’s in development! I’m an executive producer, but I’ve also moved onto another project I’m excited about. That is all I can say for now but many of the original crew are working on it, so it’s in very good hands. More updates to come in the future.

We Bare Bears: The Movie premieres Monday, Sept. 4 at 6pm ET on Cartoon Network. To get Cartoon Network and over 50 other channels, follow the link below to sign up for Sling Orange + Blue.