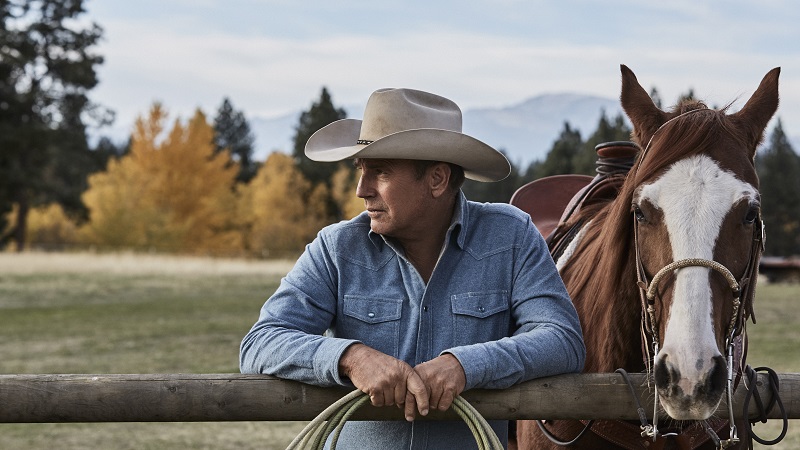 It might be a bit soon to say, but Yellowstone could succeed Game of Thrones as the most ambitious, multilayered narrative on television. Debuting last night on Paramount Network, the epic Western tells a story of warring landowners and the competing powers within and related to each group. The premise is not so simplistic as proud-Montana-family versus ruthless-California-developer, or reservation versus ranching interests. As skillfully as any other title in recent memory, Yellowstone’s first episode establishes that the series has much a bigger story to explore, and it will surely be an adventure worth taking.

Despite inherent real-world boundaries, Yellowstone’s setting offers as much mystery and majesty as HBO’s epic fantasy; an impressive degree of worldbuilding comes through in every scene. Stunning, crystal-clear shots of Montana’s mountainous landscape remind audiences of the immeasurable prize at stake, and the show’s score reinforces the momentous nature of every player’s move.

Yellowstone centers primarily on the Dutton family, at least as much as Game of Thrones can be described as focusing on the Starks. Kevin Costner stars as the aging patriarch, John Dutton, as he strives to preserve the future of his ranch – one the size of Rhode Island, so we’re told – near Bozeman, Montana. With bitter enemies at every border, John looks to his four grown children and offers each of them wisdom they might need to hold the land intact.

Among the four younger Duttons played by Wes Bentley, Kelly Reilly, Luke Grimes, and Dave Annable, it remains unclear who possesses the necessary cunning to succeed their father if and when the need arises (in both dialogue and character dynamics, comparisons to Empire‘s inspiration, The Lion in Winter, would not be misplaced). Bentley’s character, Jamie, the second-oldest behind Annable’s kindly Lee, might seem the logical frontrunner, yet several clues hint that Jamie might harbor a secret behind his polished façade. As portrayed by Reilly, the only daughter in the Dutton clan, Beth, more than holds her own against her three brothers. Beth’s instincts appear far more astute than her siblings’, but she comports herself with entrenched detachment at best and outright contempt at worst, most noticeably when speaking to Jamie. Only the youngest, Kayce, brightens Beth’s mood, but he harbors his own longstanding resentment toward their father. Grimes shines in the role as the youngest brother, an anxious veteran married to a Native American woman (Kelsey Asbille) and living apart from his family on the reservation with their young son.

Leading the rival factions are Gil Birmingham as Thomas Rainwater, a new Chief intent on reclaiming a land that belonged to his people long before ranchers or developers arrived, and Danny Huston as a real estate tycoon whose construction vehicles bring chaos to the serene landscape, particularly in the show’s shocking opening scene. The two actors provide excellent foils to Costner, and the prospect of a backroom alliance between them looms large. Regrettably, this description hardly scratches at the story’s surface: befitting of Yellowstone‘s expansive setting, there is so much more at work in the first episode than can possibly be restated.

A dark drama that unfolds under a wide open sky, Yellowstone features a demanding list of characters and plots to follow, but with more than enough promise to justify weekly viewing. The premiere sets the stage for an inevitable showdown, and if future episodes continue to build tension as capably as the first, then this tale will be the most epic battle-series to watch, even without dragons.

Watch the premiere of Yellowstone on demand and don’t miss new episodes airing Wednesdays at 10pm ET on Paramount Network.