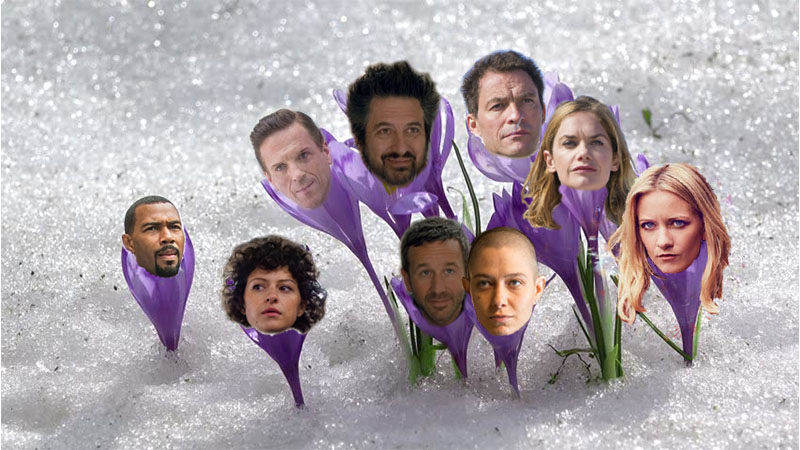 After 8 seasons spread across 9 years, a certain little dragon show that has totally dominated the conversation around TV is ending this Sunday night. Once you’ve grieved either the end of the show or the way that it’s ending — depending on just how much time you spend on the Internet — you’re going to have a smoking crater in your heart the size of King’s Landing. Here are a few suggestions as to how you might fill it!

Show: Billions
Available on: Showtime
Episodes: 37 and counting
What: Set in the high-stakes world of high finance, Billions cleverly has two protagonists who are each other’s antagonists, and wisely declines to ever take sides: Bobby Axelrod (Damian Lewis) is a billionaire hedge-fund manager with a, shall we say, flexible moral compass and an unblemished record of covering his tracks. Chuck Rhoades (Paul Giamatti) is the U.S. Attorney for the Southern District of New York (Preet Bharara’s old job), with jurisdiction over Axe’s crimes and a dogged determination to land his white whale, no matter how many ethical eggs might get broken in the process. Complicating matters is the fact that Axe’s most indispensable employee, in-house therapist and performance coach Wendy Rhoades (Maggie Siff), is Chuck’s wife of many years. This show started strong and only got better as the seasons went on, with its biggest shot in the arm being the addition of Taylor Mason (Asia Kate Dillon), a gender nonbinary, plural-pronoun market analyst with a touch of Asperger’s, whose financial genius catapults them to Axe’s side. And with scenes routinely set in the kinds of places most of us can only dream of, it’s a tour of the lifestyles of the rich and famous that would make Robin Leach proud. Endlessly inventive, high-stakes, easy to look at, and loaded with pop culture references, it’s a perfect chaser for the heavy themes of Game of Thrones.
Why: Each of its four seasons has aired in the spring, opposite Game of Thrones – so you may well have missed it just because of scheduling. And, while the stakes are not quite as high as the Iron Throne to Rule the Seven Kingdoms, the sheer dollar amounts (in Axe’s case) and the executive power (in Chuck’s) keep things compelling, even as they continually remind you that the people at the top, like in Westeros, are not necessarily the best people. (AC)

Show: Search Party
Available on: TBS
Episodes: 20
What: A seamless, Brundlefly meld of mannered Hipsters-Approaching-Adulthood comedy with old-fashioned murder mystery, Search Party premiered in 2016 with an unconventional release strategy: TBS released all ten episodes at once, on Thanksgiving weekend, in hopes of getting college kids home on break to get hooked while hiding from their relatives. It didn’t work, and this underseen gem of a show has remained underseen ever since, even through its equally excellent second season. The premise: Dory (Alia Shawkat, Arrested Development) is aimlessly drifting through post-collegiate life in Brooklyn, working an unsatisfying job, doing brunches with her similarly undermotivated best friends (John Early and Meredith Hagner) and barely tolerating her boyfriend (John Paul Reynolds) when she notices a MISSING poster with a photo of a college acquaintance. Pretty soon Dory is obsessed with finding this person she barely knew, and roping her friends (whose collective memory of the missing girl is “she sucked”) into a search that spirals farther and farther out of control. Whip-smart writing and a terrific main cast, all of whom were unfamiliar to me (save Shawkat) keep this darkest of dark comedies compelling and, more often than not, cringily hilarious.
Why: TBS has promised a third season, but it’s been late in coming — season 2 wrapped up in late 2017 with a shock ending worthy of the Red Wedding and we can’t wait to see where it goes.

Show: Get Shorty
Available on: EPIX
Episodes: 20
What: This series adaptation of the Elmore Leonard novel that was made into a super-slick John Travolta-Gene Hackman vehicle back in the ‘90s takes the initial premise — a mob enforcer on a job in Los Angeles tries to break into the movie business — and strips off all the gloss. Where Travolta’s Chili Palmer was an impossibly cool, impossibly clever movie buff able to win any fight or talk anyone into anything just by saying “Look at me,” Chris O’Dowd’s Miles Daly is disheveled, down on his luck, and above all, relatable: he’s doing it all because his ex-wife, disgusted with his vocation, has cut off visitation with his daughter, who he lovingly calls “Shorty.” Ray Romano continues to bury his Everybody Loves Raymond character with a rumpled, weary, sympathetic performance in the Gene Hackman role, the B-movie producer so down on his luck that he’s willing to work with Miles. Get Shorty, the TV show, takes place in a radically different Los Angeles than the one we saw in the movie, the dingy, cramped apartments and offices and crappy cars that would never get waved onto a studio lot. Even before he goes to L.A. and catches the bug, he’s doesn’t even rate working for a Las Vegas crime outfit; he’s from Pahrump. And even the best TV is only as good as its supporting cast, and with the likes of Lidia Porto, Sean Bridgers, Megan Stevenson and Goya Robles filling out the call sheet, Get Shorty has nothing to worry about.
Why: EPIX is relatively new to the series TV game — did you even know there were original shows on EPIX? — and this is by far the strongest show it’s produced to date. And like Game of Thrones has a lot to say, metaphorically, about power and government in our world, Get Shorty effortlessly draws parallels between organized crime and Hollywood. And, it’s just really entertaining. (AC)

Show: Power
Available on: Starz
Episodes: 48
What: James St. Patrick (Omari Hardwick), aka “Ghost,” is your classic American success story: a man who through hard work and laser focus pulled himself up out of poverty to become one of New York City’s biggest and wealthiest drug dealers. But now he, like so many gangsters before him, is trying to forge a life for himself in the straight world, and does so by following in his father’s footsteps and opening a high-end nightclub called Truth. Of course, the club is also a front for laundering drug money, so going straight may take awhile. Tommy Egan (Joseph Sikora) is Ghost’s best friend childhood and remains his closest confidant and first lieutenant of his operation; Tasha St. Patrick (Naturi Naughton) is Ghost’s wife and mother to his three kids, who has some doubts, not about her husband’s life of crime, but the drop in income that going straight would mean. In the span of 24 hours, Ghost’s empires — both on the streets of NYC and at home — are thrown into chaos when some steals a day’s receipts and his ex-girlfriend, Angela Valdes (Lela Loren) shows up at his club. Worse still, it turns out Angela is Assistant United States Attorney on a task force that seeks to catch — see if you can guess who she’s after. Power finds Ghost caught between his wife and his ex-girlfriend, between the high life and low lifes, between life of crime and going legit, explores how power corrupts and how desire can corrupt our quest for power. Creator/showrunner Courtney A. Kemp, who cut her teeth writing for The Bernie Mac Show and The Good Wife, came up with the concept after a meeting with Curtis “50 Cent” Jackson. Like a lot of shows with this level of ambition and scope, it takes a while to get all the pieces in place and find its footing before delivering the goods.
Why: This has been one of Starz’ highest rated shows for years now, but somehow hasn’t found the audience many felt it deserves. The sixth and final season is set to debut on Sunday, August 25, so you’ve got plenty of time to binge all 48 episodes in time for the show’s swan song. (SR)

Show: The Affair
Available on: Showtime
Episodes: 42
What: Noah Solloway (Dominic West of The Wire fame) is a teacher and struggling novelist who’s married to Helen Solloway (Maura Tierney), whose father, Bruce Butler (John Doman) is a bestselling novelist spending his retirement out on Montauk with his wife Margaret (Kathleen Chalfant). When the series opens, we find Noah, Helen and their four kids at their Brooklyn brownstone preparing to head of to the Hamptons for the summer, an annual journey that fills Noah with dread due to his father-in-law’s withering disapproval. They stop along the way at a diner where Noah crosses paths with Alison Bailey (Ruth Wilson, best known for her villainous turn on Luther), a local waitress, setting in motion an affair that will reverberate through the lives of multiple families for decades to come. What elevates this show above the standard drama about infidelity is that the arc of their romance is told in flashback from the perspective each party as they’re being interrogated by police for an unspecified crime. As the series progresses, the perspectives come to include those of Noah’s and Allison’s cuckolded spouses. The format offers a fascinating exploration about the subjective nature of memory and how self-serving our recollections of past events can be. A viewer’s allegiances can turn on a dime as  each iteration of events unfold, and sometimes what you see doesn’t quite jibe with what you’re hearing, elevating further the level of uncertainty about what exactly happened. It all makes for intense psychological drama about love, sex, and attraction and the stories will tell ourselves about ourselves to justify the way we treat others.
Why: Because Anna Paquin has signed on to play an adult version Joanie, the youngest of the Solloway, who was just 5 when we last saw her. Paquin’s arc as Joanie will take place 20 to 30 years into the future and explore the long-term effects of her parents’ soured romance. Also joining the cast for the fifth and final season will be the great Jennifer Jason Leigh. (SR)