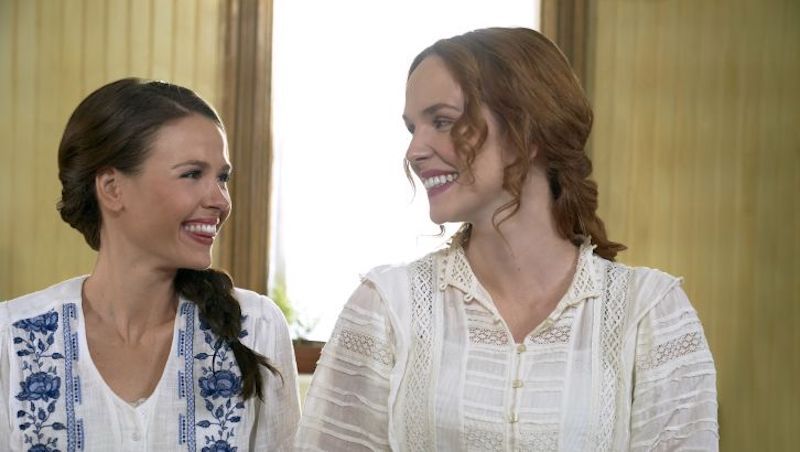 Fellow Hearties – I feel your pain. Our beloved Hallmark drama When Calls the Heart filled us with joy and love for five seasons, and then stomped on our hearts when we lost our darling Jack (Daniel Lissing), the Canadian Mountie of our dreams, in the season 5 finale – only a few episodes after marrying his beloved Elizabeth (Erin Krakow). Losing another major cast member this season – Lori Loughlin’s Abigail,  a casualty of the USC admissions scandal — has only amplified our pain. With the introduction of Elizabeth’s new competing love interests Lucas (Chris McNally) and Nathan (Kevin McGarry), and the budding romance between Carson and Faith (Paul Greene and Andrea Brooks), our tender hearts are on the mend, but our grief is still keenly felt.

But take heart, Hearties: our hope will be renewed with the premiere of When Hope Calls, the spin-off story of newly reconnected orphan sisters Lillian (Morgan Kohan) and Grace (Jocelyn Hudon), separated as toddlers when Lillian, but not Grace was adopted. After reconnecting and working through the trauma of their experience at the orphanage, the sisters decide to open an orphanage of their own in the western town of Brookfield. Will there be joy? Happlness? Romance? Heartbreak and loss? Most importantly, will there be a steady flow of dreamy early-20th century Frontier men to woo the sisters? Have you never seen a Hallmark Channel show before?

There have even been promises that a few familiar faces from When Calls the Heart might pay a visit to Brookfield to help launch this new series, and I’m hoping we will see some full-on crossover stories between the two series. In any case, I have my tissues ready!