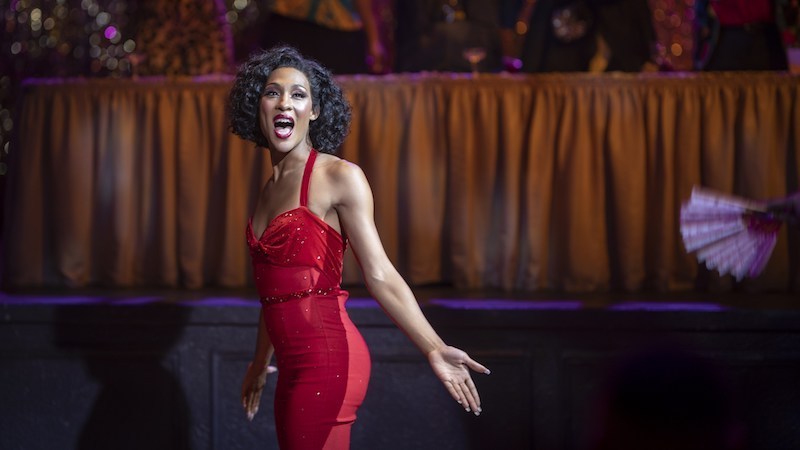 Last night’s eventful Pose finale brought us an 8-month time jump, brought our ballroom family back together at Blanca’s hospital bedside, and (possibly) brought us the next generation of House Evangelista. The sophomore season did what Ryan Murphy shows do best—reinvent itself. Gone are both the gritty trappings of season 1 and its Wall Street-y plot line featuring Evan Peters and James Van Der Beek.

Instead, season two refocused on what really makes the show great: Representative storytelling. This season brought in stories on AIDS activism, homophobia, transphobia, the murder of trans women, and law enforcement’s treatment of LGBT victims. But Pose is all about balancing the dark with the bright, continually bringing joy in the form of self-created family and, more importantly, the ballroom.

Before we say adieu to our favorite houses until next year, let’s relive this season through its most legendary looks.

The Look is Everything, Darling: ‘Pose’ Season 1 Fashion Recap

The beginning of Pose’s second season found our ballroom family (even Elektra!) living together in Blanca’s Bronx walk-up, basking in the afterglow of Vogue’s chart-topping success. But the AIDS epidemic is always looming in the background. After attending his 201st funeral, Praytell gathers the ballroom crew to peacefully protest at St. Patrick’s Cathedral. The only one not in attendance at this revolutionary act? Elektra, who’s busy building a mini-French Revolution…

… and gets read to filth by Praytell at the ball for not coming to the protest. Maybe skip the hoop skirt with a working carousel next time, girl.

After Praytell’s very public verbal lashing, Elektra creates her own house chock-full of the fiercest (ahem, best-looking) talent. House Wintour is born and the Elektra-Blanca rivalry is born again.

You can just feel the ballroom quaking after this new crew stomps in.

After auditioning to be the Fresh Face of 1990 but landing a spot in a Wet N Wild campaign instead, Angel is riding high after a string of modelling jobs and delivers this sickening denim runway look with a denim headscarf, cropped jeans, and denim heels in episode three. Yes, jean queen, yes!

Taken straight from the stories of many trans women of the time, Candy is brutally murdered by a John in a rent-by-the-hour motel room. Since she had no money and no contact with her family, the ballroom community comes together to give her a proper sendoff. It’s only right that Miss Candy herself delivers the fiercest look of the episode, prancing through the ballroom one last time in this fringed red dress with beaded shoulder straps.

In the wake of Candy’s death, Damon and Ricky reconnect following their very rocky breakup in the second episode over Ricky’s infidelity while touring with Al B. Sure. They both get the opportunity to audition for Madonna’s iconic Blonde Ambition Tour and, although neither get it, they both are asked to be a part of a Solid Gold reboot. As the two vogue it out on the ballroom floor, it’s clear there’s still something there. Bonus: Damon’s flowy, deep purple lace-overlay pants.

Bringing a bit of season 1 into the mix, episode six centers on Praytell’s AIDS Cabaret at the hospital. This time, however, he’s the one in the ward after his body rejects the AZT he started taking two episodes ago. Blanca takes over, arranging the cabaret and even convincing her shady nail salon landlord, Frederica Norman (played by the incomparable Patti Lupone) to attend. As much as I truly love Billy Porter, I have to give this one to Ms. Norman for wearing a gold-sequined evening gown to a hospital ward in the afternoon and bringing the house down with “I’m Still Here.”

Vogue’s mass appeal starts to dwindle by episode 7 and, when paired with Candy’s murder, has our younger ballroom queens in a downswing. But Papa Praytell and Mama Blanca know the cure: Get the kids to put their heads together to make a grand statement about AIDS. They need to wrap Frederica’s upstate mansion in a giant condom because 1. It’s based on true events and 2. Shady lady Frederica burned down Blanca’s nail salon to get her out and get that sweet insurance money. Damon, Ricky, and Lulu pull off the stunt with the help of their elders and Elektra’s look for the occasion, complete with paper parasol, is everything.

After seven straight episodes of togetherness and rebuilding alliances, episode eight rips everything apart and sets the drama in motion. Ricky leans on Praytell after receiving a positive HIV diagnosis, leading to them sleeping together. Poor, sweet Damon doesn’t take the news well: He’s just learned to trust Ricky again and, now, he may have been exposed to the disease. Oh, and he’s graduating from his program at the New School. Can this kid get a break? His final performance is moving and dramatic, and Mama Blanca couldn’t be prouder. Her outfit for the graduation is one of her best of the season: A very mom-appropriate business-casual skirt suit. Red is definitely her color (more on that later).

With Damon on tour with Malcolm McLaren in Europe and Angel and Papi living in their own apartment, Blanca is now an empty-nester. After spending the entirety of the season taking care of everyone around her, it’s nice to see her embrace a beach trip with Angel, Lulu, and Elektra. The ladies head to the Hamptons and, in true road-trip fashion, there’s a fantastic sing-a-long where everyone is bringing in it the style department.

Now that we’re feeling refreshed and re-energized after a girl-bonding beach vacay, Pose punches you in the stomach. It time jumps to May ’91 and Blanca is looking rough. Praytell drops in after a long absence and takes her to the hospital. All the ladies stop by to keep Blanca company and, after a few days battling infection, she gets to feeling better and even finds out that Frederica Norman was arrested for the arson of Blanca’s nail salon. Blanca’s released from the hospital just in time for the Mother’s Day Ball and makes a grand entrance in wheelchair by Angel only to do an amazing reveal from a dowdy, white coat to a glam red jumpsuit. What a way to close out the season!

After the ball Blanca makes friends with two homeless pre-teens, officially ushering in the new era of House Evangelista and allowing the show to remake itself again. Might fall in love with another trophy-snatching ballroom crew next season? Could we see another big time jump? One thing’s always certain with Pose — the looks will be sickening.

Season 2 of Pose is available on demand.