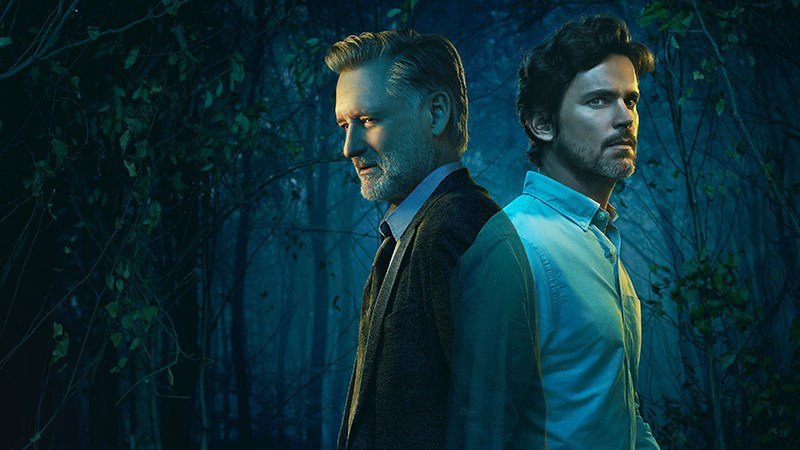 Bill Pullman returns as Detective Harry Ambrose on the third season of USA Network’s The Sinner, with a new case to investigate, a boatload of inner demons to repress and a suspect to get dangerously close to.

Still haunted by his emotional investment in the fate of Julian — the young boy at the center of a double homicide last season — and pained by sciatica, Harry delves into work as he rebuffs colleagues pushing for his retirement.

He reluctantly agrees to mentor a junior detective when a fatal car accident takes on a more sinister tone as inconsistencies in the lone survivor’s account of the fateful night come into view.

The logical side of Harry’s brain drives him to pursue Matt Bomer’s grieving high school teacher Jamie Burns to get to the bottom of the events leading up to the horrific crash, while his hunger for connection and empathetic nature compels him to awkwardly befriend Burns in the process.

On the outside, Bomer’s character looks like the model husband, father-to-be and all-around perfect suburban yuppie. Yet Jamie is listless and numb to the blessings surrounding him, including the charms of his fiery, bohemian wife Leela (Parisa Fitz-Henley). He gets high before class in the bathroom of the upscale, all-girls private school he teaches at, he gaslights his eager student into writing her own college admissions recommendation letter and, at one point, puts his hand perilously close to a stove burner for kicks.

He’s roused only by the arrival of old college buddy Nick Haas (Chris Messina) on his doorstep – an unexpected house call that upends both their lives. Messina imbues Nick with a charisma that is both enthralling and abhorrent. The depth of his hold over Jamie looks like the season’s true puzzle to solve.

With only two episodes available for early viewing, we have some questions:

1. What dark secret will we learn about Harry this season?

In the first season of The Sinner, Harry’s proclivity for sexual masochism was on full display. In the second, we learned about the childhood event at the core of his personal trauma – a fire he started which led to his mother being placed in a mental health facility and him entering the foster care system. This season, Harry is living in seclusion in upstate New York where he boasts that if he goes outside down by the maple tree he can get cell service (“two bars!”). His semi-estranged daughter and grandson find his living situation distressing when they come for a visit and he further alienates this fraction of a family by darting off when police duty calls. One doesn’t have to read between the lines to gather that Harry wasn’t the most attentive father. The introduction of his grandson in the first episode suggests we’ll unearth more of his failures as a parent and how that affects his ability remain an impartial player in Jamie’s journey.

2. Why doesn’t Harry understand how a paper fortune teller works?

Harry discovers a paper fortune teller with Nick’s belongings. We all know it: The kind sixth grade girls in 1990 used to determine who they would marry and how many children were in their future by contorting the paper triangles like a bird’s mouth. Yet Harry seems completely confused by how the contraption works, even though his daughter was once a schoolgirl (and like an iPhone, it’s pretty intuitive). Certainly, it holds clues into the antics a young Nick and Jamie participated in, and perhaps what drove them apart. Maybe if Harry was tethered to more than two bars of cell phone service, he could find a how-to on YouTube.

3. What is Übermensch theory?

Technically, it’s a philosophy concept attributed to Friedrich Nietzsche that relies on the idea of “the overman” or “the Superman” and their psychological superiority over us regular folks. They “make their own values” and “they accept that they might need to hurt people in the name of great things.” This video does a great job of explaining it further.

So, how does this apply to The Sinner and Nick and Jamie? Bill Pullman explains to the New York Post that “there was always this feeling that there would be this [Fyodor] Dostoyevsky, ‘Notes From the Underground’-style encounter that brings [the show] from the personal trauma that had been the hallmark of the first two seasons, encountering people with some personal trauma, to something larger. And that sense of being outside the law and how you can rationalize that. Übermensch. I’m special. And I’ve been given this ticket to rise outside of what everybody else has to do.”

4. Will Harry and Sonya share more than flirty banter?

The car accident takes place on the vast private property of a painter named Sonya (Jessica Hecht) who specializes in male nudes, which brings Harry to her door. As the two interact over two episodes, they partake in charged conversations that hint at attraction mixed with derision. At this point it’s unclear if Sonya is merely an innocent bystander in the accident, a target or an accomplice.

The Sinner premieres Thursday, Feb. 6, at 9pm Eastern on USA.