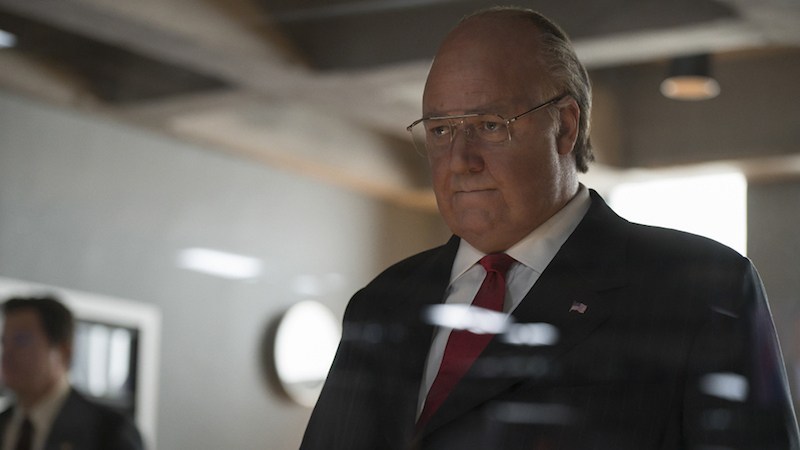 A documentary about competitive eating in which contestants eat pounds of cow brains recently landed on my desk. Then came The Loudest Voice from Showtime. Who knew the ascension of former Chairman and CEO of Fox News, Roger Ailes, would be more unsettling than people gorging on brains?

Russell Crowe completely disappears in his brilliant portrayal of Ailes in this excellent miniseries. In the opening scene, Ailes sits in an unspectacular little diner in 1995, before launching what would become the most watched cable news network in American history. The way he eats his absurd portion of pancakes while he condescendingly tells the waitress “Merry Christmas” after a casual exchange of “Happy Holidays,” is the perfect encapsulation of the American identity almost 25 years later.

It doesn’t matter whether you like Ailes or not — he knew how most people thought of him, and he didn’t care: right-wing, paranoid and fat. Whatever you think of Fox News and its disgraced spirit animal, this miniseries isn’t here to change any minds. It serves as documentation of how Fox News became a giant in and how that incredibly loud voice has influenced our culture and the huge partisan divide.

There is one scene, in particular, that is a jarring example of how the landscape has changed since the mid-90s: Ailes is let go from his post running CNBC and America’s Talking — the forerunner of what would become MSNBC — for undisclosed HR violations. Following his termination from NBC, a foreshadowing of his ultimate demise at Fox, many in his staff were crying. He may have been a monster, but he was beloved.

Ailes was the epitome of the suit of the 1990s he became synonymous with. Loud like a ’90s NBA Draft pick’s suit, but with absolutely none of the swagger. He was more like the boxy-oversized-pleated suit that never seems to fit except for an ever-expanding McDonald’s waistline and was distracting for all of the wrong reasons while somehow still going mainstream. Just like the suit, Ailes was excessive in every aspect.

This man tapped into what many Americans wanted before they even knew they wanted it. On a smaller scale at CNBC, he was first to get a reporter on the floor of the NYSE (characteristically calling that reporter out more for her looks than her journalistic integrity). On a much larger scale, he catered to a conservative America while every other outlet seemingly catered to the coastal elite. By giving this audience a voice by any means necessary (including hiring a shock jock from Atlanta at the bottom of the demo reel pile named Sean Hannity), his power proliferated to the point where the only thing that could stop him was himself. The power created a predator not willing to stop at anything to get what he wanted.

Crowe captures that predatory essence better than a hawk swooping down to eat its prey. You can only vaguely recognize him behind his incredibly detailed sun-spot makeup, bald cap and fat suit, but with a menacing voice. The way he portrays Ailes looking for female on-air talent, inspecting them like show horses, is the encapsulation of this unsettling feeling because it gets us a glimpse into his abusive psyche. Crowe’s transformation works similarly to that of Christian Bale’s performance as Dick Cheney in Vice. But at least that movie had some comic relief.

None of the faces here are instantly recognizable outside of Crowe’s, except for Seth MacFarlane, who uncharacteristically doesn’t have much to say here, and Naomi Watts, who plays Gretchen Carlson, whose allegations of sexual harassment led to Ailes’ ouster from Fox. Maybe this is just a vessel to earn Crowe an Emmy, but it would be much deserved. Mostly because, defying all odds, he gives this menace a louder voice than even Fox News has.

The Loudest Voice premieres at 10pm ET Sunday, June 30 on Showtime; all episodes will be available on demand as they air.