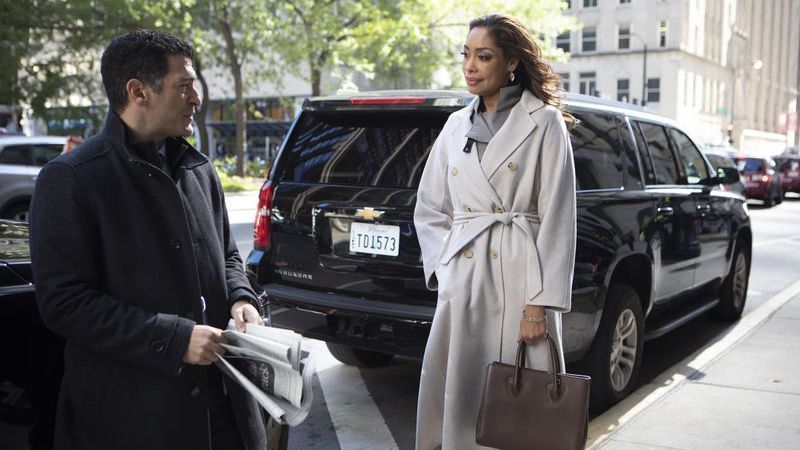 The motivation behind so much of the action on USA Network’s long-running legal dramedy Suits has been, to paraphrase Colonel Nathan R. Jessup, “I want to be on that wall! I need to be on that wall!” The wall, in this case, is the one in the front lobby of the law firm where our protagonists toil. And over the years, no one’s name was on that wall longer and no other name ever appeared alone than that of Jessica Pearson. So it’s only fitting that on the same evening that Suits debuts its final season, Pearson unveils its series debut.

Season 8 of Suits ended with Robert falling on his sword so that Harvey could keep his law license and the firm which briefly bore his name could live on. Once the dust settled, Harvey chatted with Samantha, Robert’s protege, about the loss of their mutual friend from the firm, and in that moment he finally realized his feelings for Donna. After brusquely excusing himself, he raced to Donna’s apartment and promptly threw himself into her arms for a passionate kiss.

Spoilers for Season 9 have been embargoed, as is industry custom, but it would not be out of bounds to reveal that the premiere episode opens with Harvey and Donna awaking from a post-coital slumber. Their reverie is short-lived, however; while Robert’s departure from the firm may have saved Harvey, the firm now finds the barbarians are at the gate trying to steal away Robert’s old clients.

And because the remaining partners refuse to take Robert’s name off the wall, Harvard is effectively cutting off their pipeline of new associates, forcing Louis to go into damage control mode with an old friend there. Man, if it ain’t one thing, it’s another…

Flashback to Season 6 of Suits and you’ll recall that Jessica Pearson (Gina Torres) decided that her work/life balance was out of whack and that she’d lost her way in the cutthroat world of corporate law. So she decided to reconcile with her on-again, off-again boyfriend, Jeff Malone, and move with him to Chicago, where she hoped to launch a career in city politics. The decision to leave New York was also nudged along by her disbarment there for her part in defending Mike’s fraudulent law career.

The Season 7 finale, then, served as the backdoor pilot for Pearson, in which Jessica wins a million-dollar lawsuit against the city, only for the powers that be in City Hall to have her disbarred in Illinois, as well.

So with the curtain rising on the series premiere proper, our hero finds herself at odds with her boyfriend and her relatives, who are stunned by what they perceive as her betrayal as she drops her fight to save the low-income housing where some of her relatives live, in return for a job working as the mayor’s fixer.

Jessica has convinced herself that the lawsuit was a loser and that she could do far more good for the people of Chicago from within the halls of power. It seems naive given that she’s already brought lawsuits against the city and been disbarred by the mayor’s lawyer (whom Jessica suspects of sleeping with the mayor) — she knows the place is a vipers’ nest. But, hey, she wants to be an agent for change, so where better to flex?

Pearson is a shade or two darker in tone that Suits, as it thus far lacks its predecessor’s cheeky tone and soapy relationships. But it features one of Suits’ most beloved characters as its protagonist and delivers all the backstabbing and legal maneuvering a Suits fan could hope for. Think of it not as the end of Suits, but rather the beginning of Pearson.

Watch the debut of the final season of Suits on USA Network at 9pm Wednesday, July 17, followed by the series premiere of Pearson at 10pm.