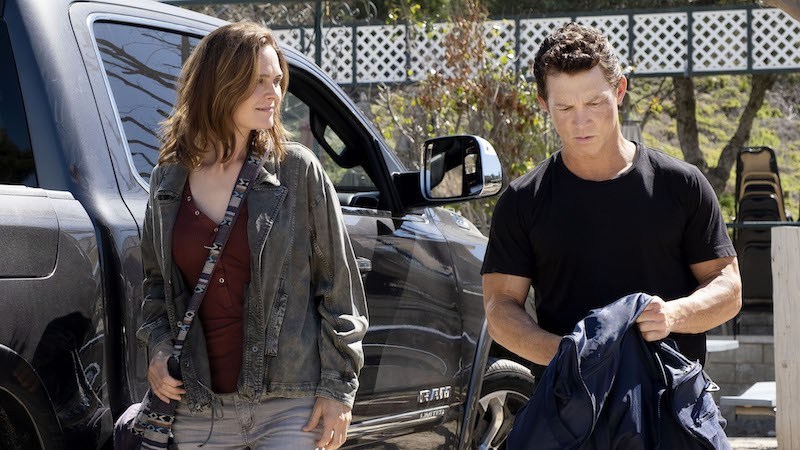 Season 4 of TNT’s Animal Kingdom premiered with a bang over Memorial Day weekend, with the fun-loving criminals of the Cody clan pulling off a dangerous job made more dangerous by the fact that Pope (Shawn Hatosy) is on the edge. And last week we met Angela (Emily Deschanel), an old friend of Pope’s deceased twin sister Julia, an ex-junkie recently released from prison and looking for connection. I got the chance to ask Hatosy and Deschanel a few questions about the new season, their shared story arc, and the craziest thing they each have to do this season. (Answers have been lightly edited for readability.)

Sling TV: Shawn, you had a great arc on ER, and you were terrific on Southland — super underrated show that I wish was still on — and now you’re on Animal Kingdom. Are you the De Niro to John Wells’ Scorsese?

Shawn Hatosy: On ER I played a character with multiple personalities: One of them was a good hearted guy, like Sammy on Southland. One was a psycho like Pope. The third character was an abused 6 year old boy, so the way I see it, we still have some work to do!

Sling TV: Those three shows I mentioned all had very different premises. What stays consistent from one Wells production to another?

Sling TV: Can you talk a little about where we left Pope at the end of last season, and where we find him in season 4?

At the end of season 3, Pope and Smurf negotiated a deal that sent Lena to go live with a foster family as long as Pope would stay in the house with Smurf as her hostage. He’s literally Smurf’s prisoner so Lena can have a normal life. Season 4 Pope is angry at the world and can’t sleep, so he starts cage fighting in order to get his aggression out.

Sling TV: Emily, what’s it like stepping into a cast that’s been working together for so long?

Emily Deschanel: It is nerve wracking to enter a new working environment especially one where people have worked together for years. I met Ellen Barkin first, who truly welcomed me and made me feel at home, even though our characters are at odds. Everyone has been very kind and has made me feel like I belong. It is still strange for me to do a job where I don’t work every day, though. So every time I come back I feel like I am re-entering a new situation.

Sling TV: Most probably know you best from your long run on Bones — as a semi-destitute ex-junkie, Angela is a very different kind of character. Can you talk about what made you want to take on something so different, and how you approached it?

When I thought about what kind of job I wanted to do next, I didn’t want to narrow my focus so much, but wanted to just do something different than I had done before, especially different from Brennan and Bones. I am not interested in doing the same thing twice. That seems boring. I want to challenge myself even if it means feeling uncomfortable. Angela is so different from Brennan and Animal Kingdom has a totally different tone than Bones. This job scared me, so it felt like something I had to do.

Sling TV: We only got to see the first two episodes of the new season but it looks like you two share a big story arc. What do Pope and Angela see in each other?

ED: Angela and Pope have known each other since childhood, so they have a shared history. Angela was Pope’s twin sister’s best friend. They both felt the loss deeply when she died, they share that loss and pain. I think Angela sees a kind of dark night in Pope. He was the guy who beat people up if they hurt her or his sister when they were kids. To her, that seems kind of romantic. Angela is not afraid of violence. I think she grew up with violence in the home so she equates that with love. I don’t know what Pope sees in Angela. It’s not my job to figure that out. Ha! But she keeps reminding him of the past to show him that she belongs there with his family.

Sling TV: Shawn, if you could play a different role on the show than Pope, which one would you choose and why?

Sling TV: Conversely, who else in the cast would you be interested to see do a few scenes as Pope?

SH: Nobody can play Pope, I will cut you!!

Sling TV: Fair enough! Pope is a nickname for Andrew — I’ve seen every episode of Animal Kingdom and I don’t think the origin of that nickname was ever explained, do you know the backstory there?

SH: Because he’s the Pope of Oceanside, duh!

Sling TV: Using only one word, to avoid spoiling, what’s the craziest thing you each have to do this season?

New episodes of Animal Kingdom air at 9pm ET Tuesdays on TNT; all season 4 episodes will be available on demand.