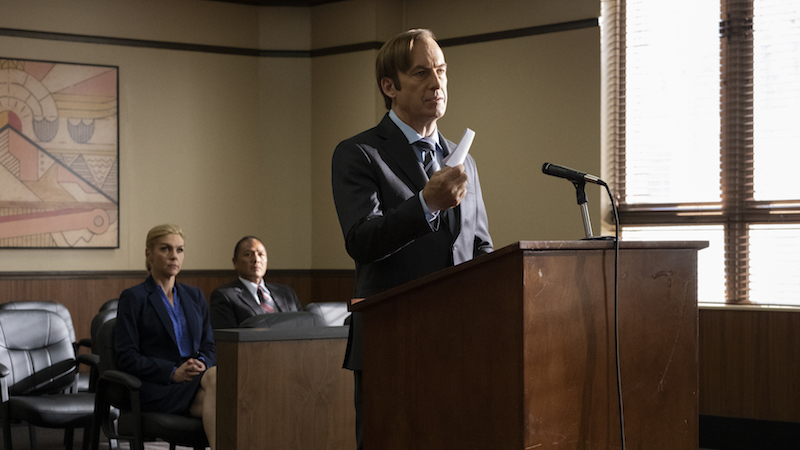 On paper, a Breaking Bad prequel spinoff centered on its most thinly drawn, cartoonish (albeit hilarious) character has no right at to be any good at all, much less a worthy successor of one of the best-remembered drama series of the Peak TV era.

But after this week’s season 4 finale, it’s clear that not only has Better Call Saul justified its existence, it is every bit as good as its parent show, and arguably deeper, in terms of exploring its characters’ psyches, motivations, and evolution. Turns out Saul Goodman, the criminal lawyer Jesse Pinkman once described as a “CRIMINAL, lawyer,” started out as a flawed but basically good-hearted striver with a surprisingly complex backstory and an amazing girlfriend.

(Light season 1-3 spoilers follow. Those seasons are available on Netflix if you want to earn the below info.)

In seasons 1-3, we traced the journey of Albuquerque attorney Jimmy McGill (Bob Odenkirk) from a hardscrabble practice as a public defender, into an unlikely eldercare practice that (briefly) won him a job with a prestigious law firm, to the suspension of his law license due to an ongoing, increasingly heated rivalry with his brother Chuck (Michael McKean), founding partner at the prestigious Hamlin, Hamlin, McGill.

Jimmy met Kim Wexler (Rhea Seehorn, easily the show’s breakout performer) in the mail room at HHM, and it was his craving both for Chuck’s long-withheld approval as a lawyer, and Kim’s as a partner, that drove Jimmy to put his checkered past as a low-stakes con man behind him and become a lawyer in the first place.

But after falsifying some documents in order to make Chuck look bad and help Kim win a client back from Chuck, who had used HHM’s size and reputation to poach them from Kim, Chuck tricked Jimmy into stealing evidence of his chicanery, and then turned him in, leading to a one-year suspension of his law license. Jimmy, in turn, worked to expose Chuck’s “electromagnetic sensitivity” — a condition that had led Chuck to leave HHM and that Jimmy had bent over backward to accomodate — as a figment of Chuck’s imagination, destroying Chuck’s reputation and ultimately leading to his suicide.

Season 4 picked up in the aftermath, with Jimmy betraying no emotion at all about Chuck’s death or his part in it, and Kim doing her best to be supportive and patient as Jimmy marked the time of his suspension working through the latest in a series of less fulfilling non-lawyer jobs: selling burner phones to Albuquerque’s underworld under the same pseudonym he used in his brief season 3 stint directing local commercials (no extra points for guessing that pseudonym).

Kim, always a fascinating character largely because of her all-business demeanor and poker face when it comes to her emotions — credit again to Seehorn’s terrific performance — becomes a co-lead in season 4: in the first half of the season, her hardworking, straight-and-narrow path is so wildly divergent from Jimmy’s, it both provides an easy contrast with Jimmy’s tendency to cut corners, and cranks up the tension that increasingly drives the whole series: we know that Kim is not in the picture during the events of Breaking Bad, so how and when are they going to split?

Of course, Better Call Saul has always been two shows in one. It’s the story of Jimmy McGill becoming Saul Goodman, but it’s also the story of Mike Ehrmantraut (Jonathan Banks) becoming right-hand man to regional meth kingpin Gus Fring (Giancarlo Esposito), and in season 4 that story moves to as satisfying an endpoint as Jimmy’s, with the start of construction of the Superlab, another notable Breaking Bad character making a couple of appearances, and the arrival of the charming Lalo Salamanca (Tony Dalton), stepping in to handle business for Gus’ rival cartel with nemesis Hector (Mark Margolis) disabled. We know from Saul’s comments to Walt and Jesse in his first BB appearance that he will eventually get tied up with both Lalo and Ignacio (Michael Mando), but how?

The strange state of both knowing and not knowing what’s going to happen is the unique pleasure of Better Call Saul. Every episode is rich with gorgeous visuals, clever montages, fascinating procedurals, and nuanced performances. Or as Jimmy McGill might put it: “It’s all good, man.”

The second half of season 4 of Better Call Saul is available on demand on AMC until November 11.