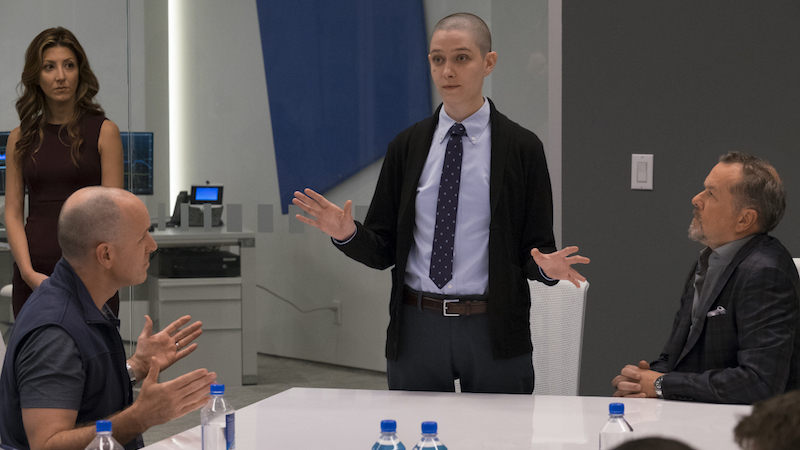 A man that studieth revenge keeps his own wounds green, which would otherwise heal.
–Francis Bacon

When we last saw billionaire investor and sometime financial crook Bobby Axelrod (Damian Lewis) and his dogged, ethically flexible pursuer, U.S. Attorney Chuck Rhoades (Paul Giamatti), Axe had seemingly checkmated Chuck, sabotaging the IPO that Chuck, his father, and his best friend were heavily invested in, and shorting the stock. But Axe’s triumph turned to ashes when it turned out the whole thing was a sting by Chuck, leaving Axe exposed for multiple documented financial crimes.

As Billions returns for season 3, everyone is adjusting to the aftermath of the mutual shoot-the-moon play: Chuck’s wife Wendy (Maggie Siff), who also works for Axe as a ‘performance counselor,’ has taken Chuck back even as she continues to counsel Axe; Axe’s wife Lara (Malin Akerman) has left him and is trying to get a look at his books with an eye to the divorce settlement; Taylor (Asia Kate Dillon), the analyst who quickly rose through the ranks at Axe Capital, is taking a much bigger role at the company; Bryan Connerty (Toby Leonard Moore) is now prosecuting Axe from his new post at the Eastern District, under new boss Oliver Dake (Christopher Denham), who’d investigated Chuck before coming under his wing; Chuck’s dad (Jeffrey DeMunn) is so bitter about his own collateral damage from Chuck’s move against Axe that he wants power broker Jack Foley (David Strathairn) to reconsider his plan to make Chuck governor of New York; Chuck is adjusting to the much more hands-on style of the new Attorney General (Clancy Brown); Axe is trying to decide whether to give up his license to trade securities, even as he tries to come up with a big investment idea to save Axe Capital; and Axe’s right-hand man Wags (David Costabile) is still alternating between shocking profanity and deep-cut movie quotes as his primary modes of expression.

This show has always been compelling for its clever plotting and its ease with making financial arcana, and the moves and countermoves these people are constantly pulling on each other accessible to laymen like me, who can barely keep track of a checking account. But things moved to another level in season 2 with Dillon’s introduction as Taylor, whose clipped, Aspergerish speech pattern and non-binary gender identification made for one of the most unusual and interesting characters on television. Series creators/showrunners Brian Koppleman and David Levien have wisely leaned into Taylor’s breakout popularity, moving them right to the center of the story.

But of course, the narrative spine of the show is Axe and Chuck’s vendettas against each other, and the lengths they will each go to in order to destroy the other. Axe vowed to find whatever tracks Chuck may have failed to cover in his Ice Juice gambit, and it seems safe to assume that he will find one, or if not, find a way to sabotage Chuck’s bid for governor. Chuck, it seems safe to assume, will do his best to puppeteer Connerty’s prosecution; and with Lara moving out of the picture, Wendy, caught as ever between Axe and Bobby, could well find herself the object of Axe’s renewed attention, as he leans ever-harder on her for emotional support.

But these are just educated guesses; I have no doubt that there will be numerous, cleverly executed, well-acted twists, like last season’s big Ice Juice reveal, as that is Billions’ (ahem) stock in trade.

Season 3 of Billions premieres at 10pm ET Sunday on Showtime; seasons 1 and 2 are available in their entirety on-demand.