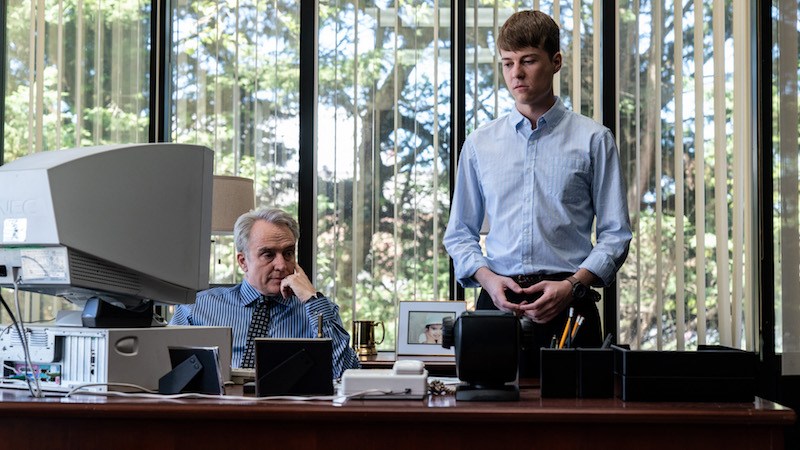 WHATSON SLING ENTERTAINMENT DRAMA NATGEO'S 'VALLEY OF THE BOOM'
Witness the Birth of the Modern World in 'Valley of the Boom'
The rise of three companies who set the course for the Internet we now take for granted.

When you consider how completely the Internet has come to dominate our lives and moment-to-moment attention -- next time you are sitting on public transportation, or waiting in a long line, take a moment and count how many people are staring into their phones -- it is a little startling to realize that it was not so long ago that few people had ever heard of it, and even fewer understood it:

As someone who was in college at the time of the above conversation, I can tell you that it all happened pretty fast: it was about six months between the first time someone asked me for my email address (I did not have one and was not sure what she meant) and when I got my first job out of college at an Internet startup (I got my first ever look at a Web browser the night before my interview) that wanted to become “TV Guide for the Internet.”

That’s a hilarious goal in hindsight, and the company (spoiler alert) did not achieve it -- but it is indicative of the gold-rush mentality that swept Northern California in the mid-1990s. That gold rush is the focus of NatGeo’s new six-part hybrid documentary/dramatic miniseries, Valley of the Boom, premiering Sunday (the first two episodes are available on demand now).

The series follows three different stories in parallel: the unexpected bonanza of the Netscape IPO, and the underdog company’s subsequent “browser war” with Microsoft; the development of the ur-social network Theglobe.com; and the exploits of Michael Fenne, founder of streaming video pioneer (of sorts) Pixelon.

What makes this series different from your typical historical drama is its inclusion of documentary-style talking-head commentary from the real people depicted in the scripted scenes -- including Netscape’s Jim Clark and James Barksdale, Theglobe.com’s Todd Krizelman and Stephan Paternot, as well as some of their lesser-known employees and competitors, and Internet eminences like Arianna Huffington and Mark Cuban -- as well as a number of bold stylistic flourishes by director Matthew Carnahan.

For example: no sooner has the viewer begun to adjust to the cutaways to comments from the real guy we just saw being portrayed by Josh from The West Wing than it cuts to a talking-head comment by the actor playing Marc Andreesen, the Netscape architect who declined to participate in this series, who explains that Andreesen would “rather munch on a snack of goat balls and broken glass than reminisce about the good old days at Netscape,” so he will fill in using old quotes attributed by Andreesen.

That’s cute, but the stunts only ramp up from there, including the very eccentric Michael Fenne (played to a bizarro T by Steve Zahn) reading a real letter he wrote to his third ex-wife,  accompanied by an interpretive dance; frequent direct-to-camera asides by the characters; a scene with a stockbroker (Lamorne Morris) arguing with a skeptical coworker whether or not to get in on the Netscape IPO, followed by another scene with the same actors, roles reversed; a pair of rappers barge in on a meeting between Netscape and Microsoft to give a rhyming capsule summary of the ensuing Browser Wars; Bill Gates is portrayed by a hand puppet rather than an actor; and so on.

As someone who arrived in the Bay Area right about the time this series is set, it had me right where it wanted me as an audience member, right down to the mournful acoustic renderings of period hits by Nirvana and TLC on the soundtrack. Morris, Bradley Whitford (Josh from The West Wing) and particularly Zahn are all in fine form, and the lesser known performers have a good handle on their characters (it’s easy to tell, because the real people keep popping up to remind you what they’re really like). But above all the story is compelling, and even more so with the formal experiments. We have only seen the first two episodes, but we are more than ready to binge the rest.

Valley of the Boom premieres with two episodes at 9pm ET Sunday on NatGeo; both episodes are available on demand.