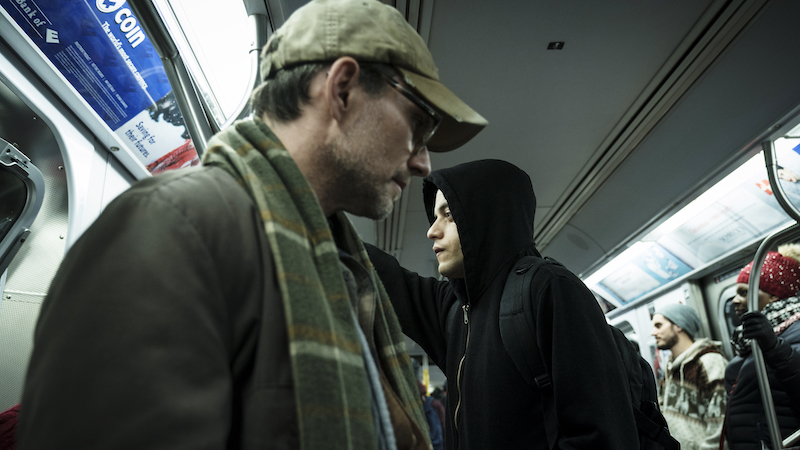 USA Network’s hacking drama Mr. Robot is a twisted show, figuratively and literally. There are moments where, for example, a very pregnant woman engages in rough sex or a corporate executive blows his brains out on live TV. Twisted stuff.

There’s also the plot twists. Clever viewers have sometimes spotted these in advance (which the show’s creator, Sam Esmail, doesn’t think is such a bad thing). However, taken cumulatively, the dizzying plot of Mr. Robot leaves you with a disoriented feeling. In this respect, the show’s style is a reflection of its lead character, Elliott Alderson, a brilliant hacker with serious mental health issues.

If you haven’t watched the show and don’t like SPOILERS, this is the time to swerve away. Here’s a look at five times “Mr. Robot” blew our minds.

Prolific actor Bobby Cannavale joined “Mr. Robot” for its third season in the role of Irving, a used car salesman who also works as a fixer for the hacking collective the Dark Army. In the season 3 finale, Santiago, the group’s FBI insider, takes an axe to the chest courtesy of Irving, who subsequently recruits the shrewd agent Dominique DiPierro (Grace Gummer). Naturally, Dom isn’t thrilled with the prospect of becoming the inside woman for the Dark Army, but a few well placed chops of the axe along with some specific allusions to her family members and Dom is theirs. It may not be pretty, but as a recruitment tactic, dismemberment tends to get the job done.

Elsewhere in season 3, Elliott works feverishly to prevent Stage 2 of the attack on E-Corp. And he believes it worked …until he sees a news report indicating that thousands have died after attacks on 71 different E-Corp facilities.

The first season ended with Elliott having pulled off Stage 1 of fsociety’s revolution: to encrypt (and effectively erase) the world’s financial records, re-leveling the playing field. But this “victory” proves pyrrhic, throwing the whole world into chaos, and by season 3, Elliott has realized how misguided his mission was in the first place. The successful Stage 2 attack, which occurs about halfway through the season and destroys the hard copies of all the encrypted records (along with 71 buildings and countless people) hits Elliott like a punch to the gut: Neither he, nor the viewer, saw it coming.

After the depth of Elliott’s troubles are revealed at the end of season 1, he spends much of season 2 ensconced in comfortable routines. Working out of his mother’s house, he shares his meals with his new friend Leon and even attends group therapy sessions. However, as with many things on Mr. Robot, this all feels just a little “off” and viewers rightly suspected that something else was afoot.

In the seventh episode of the season, we finally learn what was really going on: Elliott hasn’t been at his mom’s house, he’s been in the Big House, thanks to the hack on his therapist’s philandering boyfriend back in season 1. The jailhouse reveal may not have been as shocking as some of the others we’ll get to, but it too helps establish the show’s bewildering atmosphere.

The contrasting story arcs of Elliott and his lifelong friend Angela (Portia Doubleday) is one of the show’s strongest themes. Although they both lost their parents to E-Corp’s corporate negligence, their attitude and tactics are almost always in opposition to each other. To bring them down from the inside, Angela accepts a position with E-Corp, where she is mentored by the CEO, Phillip Price (Michael Cristofer). However in the season 3 finale, Price goes full Darth Vader and reveals that he is her biological father. Although this particular plot point has become somewhat cliche over time, in the context of Mr. Robot, it’s more of a comment on the changing nature of relationships and alliances than a “gotcha” plot twist.

I Am Mr. Robot

Of course, the biggest twist in the show is the one that came first, the one that probably kept you watching: the big reveal in the second to last episode of season 1 that Elliott is also Mr. Robot. Obviously, this particular twist (alongside the plot of wrecking the world’s financial system on behalf of the people) owes something of a debt to David Fincher’s 1999 classic Fight Club. However, the way the twist unfolds is downright elegant. The previous episode ended with Elliott’s discovery that Mr. Robot is his dead father, which was plenty shocking on its own. But this sleight of hand ultimately proved to be a distraction from the real revelation. It’s very well executed, in no small part because those of us who figured it out were duped into thinking we were wrong, until we weren’t. Like we said, this show is twisted in more ways than one.

The final season of Mr. Robot premieres Sunday on USA Network and Mondays on demand.