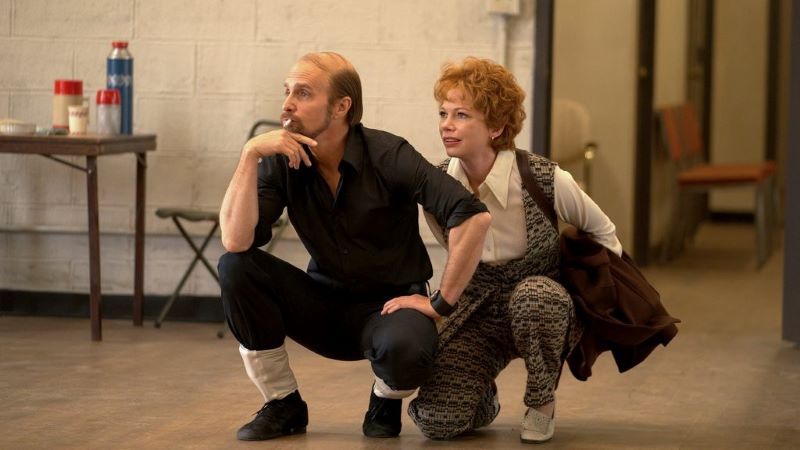 I approached the screeners for Fosse/Verdon, premiering 10 p.m. ET Tuesday on FX, with a little bit of trepidation. I am a big fan of stars Sam Rockwell and Michelle Williams, and I’ve long regarded FX as the most reliable brand on cable, but I am almost totally ignorant when it comes to the careers of choreographer/director Bob Fosse, dancer/actress Gwen Verdon, and the entire idioms of both musical theater and musical cinema.

I needn’t have worried. Producers Thomas Kail (who directed the first two episodes) and Steven Levenson work easily in what could rightly be called the FX house style, with a fractured timeline and title cards that make no secret of this partnership’s ultimate fate (“MUNICH: 16 YEARS LEFT,” or “WASHINGTON, D.C.: 8 MINUTES LEFT”).

But what a partnership it was. Like I said, I know nothing about Broadway or musical cinema, but even I have heard of shows like Sweet Charity, Damn Yankees, and Cabaret, iconic projects made so by the uniquely balanced two-person team of Fosse and Verdon: Bob Fosse (Rockwell), the dancer-turned-choreographer with the sensitive soul, the hot temper, and the voracious appetites; and Gwen Verdon (Williams), talented actress, comedienne, dancer — some would say the greatest Broadway dancer of all time — content to let Fosse, who in short order became her lover, then her husband, then her ex, soak up all the accolades for their work together, even as they both know he could never have done it, any of it, without her.

This is in part because Verdon was a masterful interpreter of Fosse’s ideas, and unafraid to edit and adjust them, but as importantly, because she had the soft-touch people skills that he sorely lacked. The first two episodes show the creation of Fosse’s greatest triumph, the 1972 film version of Cabaret — which won eight Oscars and was only blocked from a Best Picture trophy by a little movie called The Godfather — and we see Fosse locking horns with the film’s producer, Cy Feuer (Paul Reiser), it’s Gwen who leaves their daughter at home to fly to Berlin and smooth things over, telling Cy more or less the same things that Bob did, just not so coarsely.

The chemistry between Rockwell and Williams is superb here, the skeleton that everything else hangs on. The scene where they work together for the first time, a supposed audition for Sweet Charity that turns into blocking an entire number, is a study in the push and pull of their working relationship: he’s pushing the boundaries of what you can do on stage in polite society, she marvels that he’s brash enough to think they’ll let him get away with it, even as she’s making his ideas better (and gently teasing him for doing so), and he’s getting out of her way. (“It’s a seduction,” he tells her of the intent behind the number, a clever metacommentary on the scene itself.)

They choreograph together, going dancer to dancer and directing them in tandem, but Gwen lingers to give each dancer some additional secret notes. And when Bob is getting irritable on set, it’s Gwen that everyone turns to, begging her to talk to her mercurial husband and get through to him, and she patiently listens to their concerns and focuses on calming them down, rather than bother with Bob.

It’s an inspiring partnership, but not without its problems, chief among them Fosse’s tendency to fall in love with whoever he happens to be working with. This complicates all of the charming scenes of Fosse and Verdon first finding each other, because Bob is already married to another dancer and former collaborator, Joan McCracken (Susan Misner), who he soon leaves to be with Gwen — despite the fact that Joan has terminal diabetes (when Joan and Gwen meet, briefly, before Joan knows what’s going on, Joan tells her, “That’s what Bobby does, takes what’s special about a girl and makes it his own.”)

The direction is excellent, with careful attention to period detail and costumes — Williams wears a set of teeth slightly more prominent than her own, to glam her down a bit and make her look more like Verdon, while Rockwell sports an unconvincing combover — and a slightly scattered editing style that helps to show the way the characters, Verdon particularly, are feeling, as memories good and bad of their life together return in a swirl.

All of the performers are excellent, with cameos by Paul Reiser, Nate Corrdry and Aya Cash (as playwright Neil Simon and his wife Joan), Norbert Leo Butz as Paddy Chayefsky, and Margaret Qualley as Fosse’s last muse, Ann Reinking.

Above all, though, Fosse/Verdon is about creativity and partnership, and Fosse sums up the inner struggle of creative people with an elegant quote delivered masterfully by Rockwell: “That’s what we do, right? Take our pain and turn it into a big gag. We’re singing and we’re dancing and the audience is yukking it up, not realizing they’re watching a person peeling off his own skin.”

New episodes of Fosse/Verdon premiere at 10 p.m. ET Tuesdays on FX, and Wednesdays on demand.