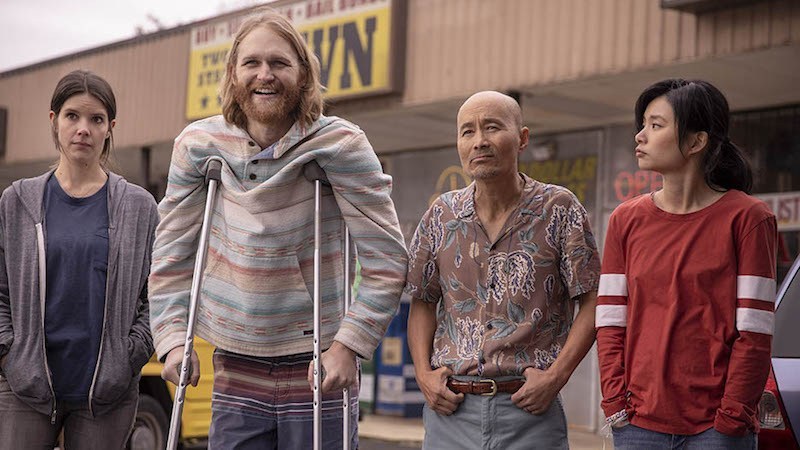 It’s easy to dismiss the people of Lodge 49 as little more than losers. Lovable shaggy dogs, to be sure, but losers nonetheless. Sean “Dud” Dudley (Wyatt Russell) has lost his father, the family business and his one true love, surfing; his fellow lodge members aren’t in much better shape, losing loves and jobs and lives. But Lodge 49 is more than that: it’s a story about the American Dream, how it’s been failing large swaths of people, and the importance of community and meaning in your life. It’s also super weird with a developing surrealist plot twist that got ratcheted up a notch in the final episode of the first season. It’s no surprise the title is a nod to Thomas Pynchon’s postmodern classic The Crying of Lot 49. With Season 2 right around the corner, it’s time for a refresher on where things stand.

The title of the Season 1 finale, Full Fathom Five, is a quote from Shakespeare’s The Tempest, and an allusion to Dud’s father’s watery grave: “Full fathom five thy father lies.” The episode begins with a flashback to the last time Dud saw his father alive. Limping around the pool supply store on crutches courtesy of a snake bite (seemingly every Lodge member is damaged both literally and metaphorically), Dud demurs when his father invites him to go down to the beach for a swim, only to be never seen again. It’s a sliding-doors moment that still haunts Dud; he hasn’t been in the water since.

Dud’s sister Liz (Sonya Cassidy) is fresh off her own existential crisis that nearly sent her to a watery grave: In the previous episode, on a boat with colleagues and coworkers, she finds herself on the precipice of adulthood and respectability and opts instead to jump overboard, thus sabotaging a nascent career that could’ve gone long way toward paying off the $80,000 bank loan her father’s death left her on the hook for. In a bold gambit, she realizes that she simply can’t function with this looming over her head and walks into the bank and plops $18,000 on the loan manager’s desk and says that’s all they’re gonna get out of her, that she will literally be dead, most likely from suicide, before paying it off in full.

Ernie (Brent Jennings) and Scott (Eric Allan Kramer), Dud’s lodgemates, had each previously thought they’d lost Connie (Linda Emond) to the other, causing a groundswell of resentment and anger that finally boils over when Scott declares himself Sovereign Protector of the lodge. A fight ensues, leaving one room of the lodge in pretty rough shape, but ends with the two men exhausted lying on the floor and Scott revealing to Ernie that Connie has been suffering from seizures and given just two or three years to live.

Connie, meanwhile, had hit the road, making her way to London and a stool at Lodge 1, where she meets local members and regales with the legend of the “true lodge” and the secret scrolls. One of the people to whom she tells the story turns out to be an employee of the lodge who must blindfold himself and count his steps in order to make it to his boss’ office. He mentions Connie’s story to the boss, thinking it’s nothing more than an amusing bit of Lodge legend. But later in the episode, we see a woman walk down a very long hallway, stick her head in the door and say to some unseen person, “We have a problem.” This is presumably what leads the home office to tell Jocelyn that he can keep the lodge open and stay on to help turn it around financially — clearly, Connie has given the powers that be at the Lodge syndicate reason to believe that there’s treasure to be found in Lodge 49. This is likely related to the Blaise’s (David Pasquesi) discovery of an alchemy kit with traces of gold dust inside. Around the same time Blaise uncovered the alchemy set, Ernie finds a trap door in the floor of the lodge that leads to a tunnel that brings him in through the floor of Larry’s old trailer, where El Confidente is waiting to take him off to Mexico in search of the scrolls.

The episode, and the season, ends with Dud finally getting back in the water. We see him sitting on a board, bobbing on the waves waiting for a proper one to ride when a seal comes by to give him a smile. The seal then goes under and knocks Dud’s board, sending him tumbling into the water, a moment later we see a shark fin head straight for him and suddenly there’s a cloud of red around Dud — he’s been bitten. His fellow surfers drag him to shore, where he has a brief vision of his father before Liz appears at his side.

“Told you it was a shark,” he tells Liz.

Season 2 of Lodge 49 premieres at 10pm ET Monday on AMC; new episodes will be available on demand Tuesdays.