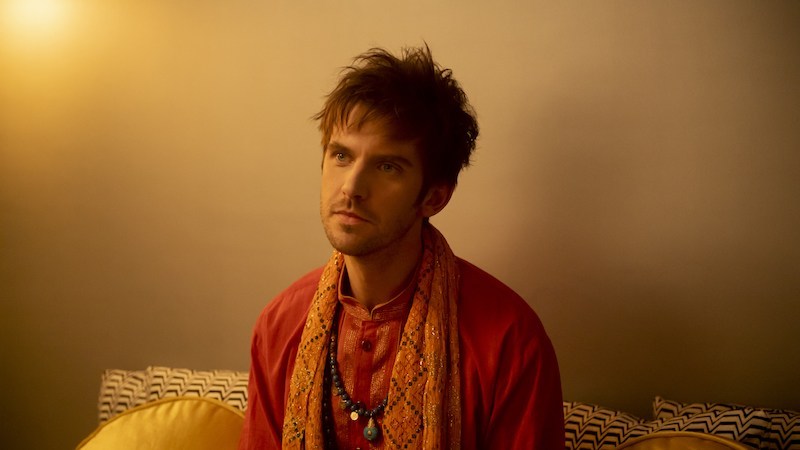 The third and final season of Legion is here and it promises to be a fitting end to one of TV’s most distinctive, overlooked and straight-up bonkers gems of the past few years. Showrunner/creator Noah Hawley (Fargo) appears determined to go out with a bang, having enlisted directors Andrew Stanton and Carlos López Estrada to helm the first two episodes respectively.

When last we saw David Haller (Dan Stevens), aka Legion, he was surrounded by those he once loved and trusted, as well as his archnemesis, Amahl Farouk, aka The Shadow King (Navid Negahban), who had found him guilty of the future crime of ending the world as we know it.

Like most of us tend to do, David had long ago convinced himself that he was the hero of his own movie, but the universe flipped the script and was telling him otherwise. When he makes a desperate plea to Syd (Rachel Keller), the love of his life, that he’s one of the good guys, she sternly reminds him that earlier that very day he had drugged her and then had sex with her.

He begins to turn in place, looking to each of his friends, declaring “I deserve love… I’m a good person.” But when he sees they are unmoved, his attitude changes sharply. “You know what?” he asks rhetorically. “I’m done. You had your chance.” And with that, he summons all his powers to break out of the orb, ascends Christ-like surrounded by a glowing aura and then vanishes, reappearing moments later in Lenny’s (Aubrey Plaza) cell so he can break her free and make his escape. As Syd and Clark (Hamish Linklater) run into Lenny’s empty cell, she asks “What do we do now?” to which he replies “Now we pray.”

Part of what makes Noah Hawley such a good storyteller is his willingness to throw his audience into the deep end of the pool and the premiere of Season 3 is a case study in how to do it. The episode opens with a stylish young woman (Lauren Tsai) listening on headphones to Lessons in Time Travel: Chapter 13 and we follow her through the streets of some unknown metropolis, the lone splash of color in a drab blue-gray world.

She happens upon a poster on a street lamp asking ARE YOU INDIVISIBLE? and the hunt is on as she begins to follow a trail of breadcrumbs. Another poster appears to be a want ad for a time traveller. What luck — she’s a time traveller! Eventually, with much trouble, she finds her way to a secret lair that is home to a cult centered on peace and love (aren’t they all?). It’s no great spoiler to remind you of David’s declaration that he “deserves love.” And that’s when things get really interesting.

Andrew Stanton’s background in animation is well suited to Legion, a show borne of comic books and with a visual style that is a mix of London mod, psychedelia, C.S. Lewis, and Bugs Bunny. At one point a character is actually pulled off screen by a gigantic shepherds’ cane, a move executed with such speed that the tea cup he had been holding stays in mid-air for a moment, spinning like a top, before it comes crashing down.

Legion’s singular look and feel are also a product of eclectic musical choices, an anachronistic jumble of fashion, a color palette that jumps off the screen. None of the show’s elements is standard off-the-rack fare, they’re chosen with care in the service of Hawley’s vision. Yes, there are some misses, but the aggressive styling pays off far more often than it falls short.

But none of this would work were it not for some really great acting, particularly from Stevens, Plaza and Negahban. Stevens’ Haller is a man haunted by ghosts on all sides, including his insides, and he finds himself arguing with himself (selves, really) as much as anyone. Stevens manages to find a new angle for each iteration of David and, more impressively, makes him sympathetic even when there’s a compelling case being made that he’s a monster.

Plaza imbues Lenny with all the gonzo joie de vivre she can muster. It’s kinda like her Parks and Recreation character, April, if she were tripping her face off. The menace with which she wields her ball-peen cane is delightful and the sight of her running across the desert in high heel boots while lugging a sniper rifle is just right. Making Lenny even more nuts is that the part was originally written for a man. Legend has it Plaza insisted they not do any rewrites in service of the gender flip and you get the sense they kept writing the part as if Lenny is a man. It totally works.

The third and final season of Legion premieres Monday, June 24, at 10pm ET on FX; the Season 2 finale is available on demand.