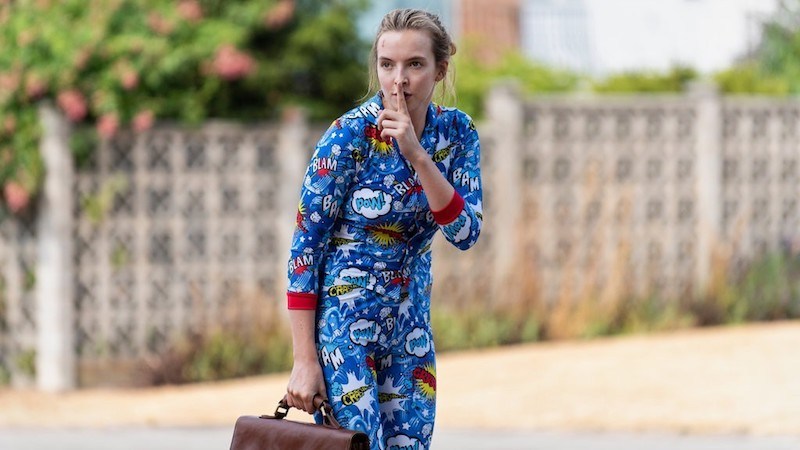 While the rest of the TV world has been bracing for winter, BBC America’s surprise hit Killing Eve returned, every bit as bloody, twisted, and funny as ever with a Season 2 that hasn’t missed a beat.

Season 1 of Killing Eve introduced Villanelle (Jodie Comer) one of pop culture’s most sociopathic, inventive, mercurial, and child-like assassins, as she set out on a deadly romp across Europe only to get sidetracked by a growing obsession with Eve Polastri (Sandra Oh), the MI-5 agent hot on her trail. What followed was a game of cat-and-mouse that got so twisted into knots that toward the end it was unclear who was chasing whom. The season finale’s intense, bloody and sexually charged crescendo seemed to bring the chase to a close, but the relief was short lived, and thankfully so.

Killing Eve has by some miracle survived the loss of showrunner Phoebe Waller-Bridge, whose hand-picked successor, Emerald Fennell, has taken over so seamlessly you’d never know the difference. Waller-Bridge, the creative genius behind Fleabag, had infused Eve with a sly wit as thick and dark as a pool of blood inching out from beneath a corpse, setting what would seem to be an impossibly high bar. Undaunted, Fennell has spiced up this bizarre love affair by making it a “love” triangle, as a new assassin known only as “The Ghost” catches Eve’s eye. The Ghost has been moving through England undetected, leaving a trail of cadavers in her wake, all of whom were originally thought to have met their deaths due to natural causes. The Ghost is everything Villanelle is not: discreet, disciplined, demure, all of the things that begin with a “d.’’ Knowing that Eve has eyes for another drives Villanelle to even greater heights of audacity, inspiring the bloodiest and most public murder of her gloriously demented career. Hell hath no fury…

With that in mind, let’s look back at our three favorite kills from Season 1, and bear in mind that Villanelle goes far beyond any of these for pure grisliness in Season 2:

Cesare Greco: The wealthy Italian magnate goes to his final reward after getting a syringe full of poison disguised as hairpin shoved into the eye, dropping him to his knees where he takes a little too long to die.

Carla de Mann: Eve dresses up as a caterer at a fundraiser and finds perfume manufacturer de Mann in the bathroom, where she introduces herself as an aspire perfumer and hands the socialite a poisoned bottle to sniff. Eve just stands there, hands folded behind her back, as she calmly watches the woman die clutch her own throat, gasp for air, fall to the floor and look up with eyes pleading for mercy.