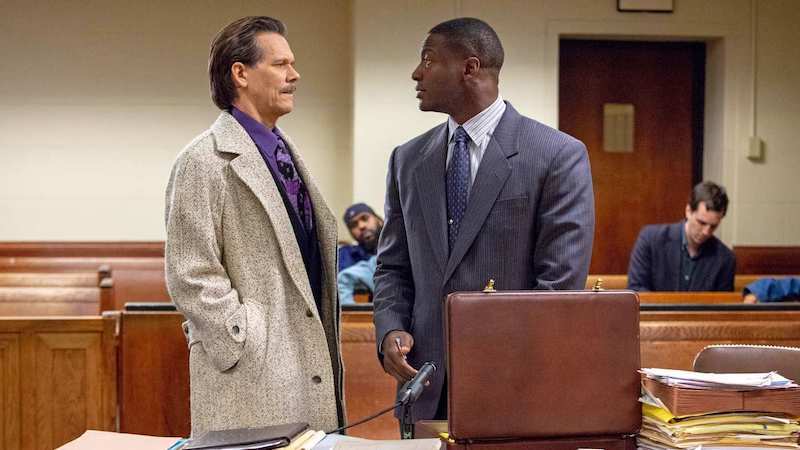 In his farewell address to the nation on January 11, 1989, President Ronald Reagan waxed poetic about his vision for America as a “shining city on a hill… a tall, proud city built on rocks stronger than oceans, windswept, God-blessed, and teeming with people of all kinds living in harmony and peace.” And so it is with a touch of irony that the new Showtime series about the efforts to root out the corruption and rot at the core of the city of Boston is called City on a Hill.

From producers Ben Affleck and Matt Damon (who else?), City on a Hill is set in the early nineties, as Boston was trying to recover from the shock of the double-murder-suicide perpetrated by Charles Stuart and the subsequent investigation into the Boston Police Department’s culture of racism and corruption. The show centers on a morally questionable FBI agent named Jackie Rohr (Kevin Bacon) and a morally righteous assistant district attorney named DeCourcy Ward (Aldis Hodge). After initially finding themselves at odds with each other, the racist federal agent and the forthright ADA find their goals aligned and join forces to clean up the city.

Bacon is having the time of his life as Rohr. He’s got slicked-back hair, a cocaine-dusted porn-stache, garish suits, a class ring you could land a helicopter on, and a wicked pissah accent. Rohr struts through the city like the cock of the walk, a local hero thanks to the part he played years ago in breaking up a local crime ring. As such, he’s untouchable and accustomed to getting whatever he wants. Until one day he meets the new  “affirmative action hire” in the DA’s office, DeCourcy Ward.

Hodge’s big break came as MC Ren of NWA in the hit biopic Straight Outta Compton. This is a decidedly different role. The name of his character’s in City on a Hill, DeCourcy Ward, is another nod to history, likely a middle finger to Robert DeCourcy Ward. The original Ward hailed from Boston and was America’s first professor of climatology as well as a eugenicist and anti-immigration activist. The namesake is no doubt rolling in his grave. This new iteration of Ward is a transplant from Brooklyn with political aspirations who’s recently taken a demotion so he can “rip out the f*#@ed up machinery in this bulls@#* city.”

Rohr and Ward cross paths after a botched drug raid leads to a cop taking a bullet to the shin. Ward’s boss gives him the case, his first at his new posting, in the hopes that it will help him curry favor with the cops. Rohr wants the suspect released because he happens to be one of his informants. Suddenly Ward finds himself getting a cold hard lesson in the chasm between how the world works and his vision of it — as a shining city on a hill, perhaps.

While all this is happening, we witness a gang led by Frankie Ryan (Jonathan Tucker) rob an armored car — things go terribly wrong, though they do make their getaway with a modest sum of cash. Undaunted, they resolve to strike again, this time with Frankie’s no good junkie brother, Jimmy, in tow. Honestly, when are people gonna learn to stop bringing the no good junkie brother along? Anyway, the gang’s activities quickly draw the attention of Rohr and Ward and the hunt is on.

The great danger of any movie or TV show set in Boston is the accent, but pretty much the entire cast acquit themselves well, from Bacon on down. Of course it helps to have a few ringers in the lineup, like Jonathan Tucker, Kevin Chapman, and Lenny Clarke, all of whom hail from Beantown. And the show is full of nice touches from the time and place, like two perps watching Ren & Stimpy or Frankie having a go at a scratch ticket emblazoned with shamrocks. City on a Hill gets the details, both big and small.

City on a Hill premieres at 9pm ET Sunday on Showtime; all episodes will be available on demand.