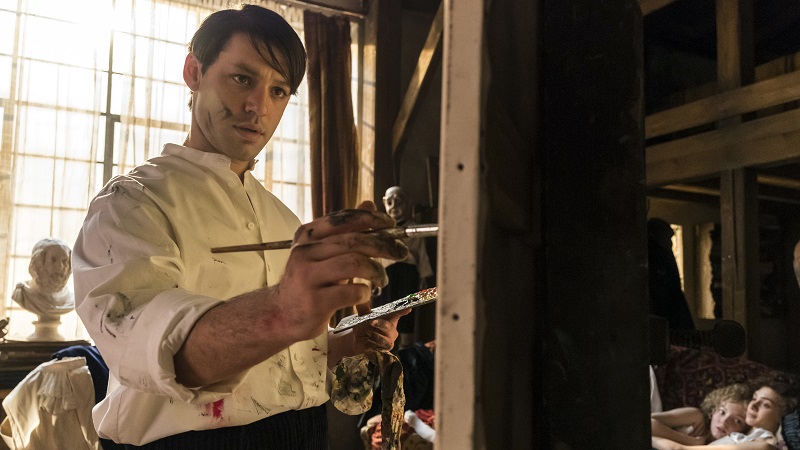 You might recognize him from season two of True Detective or Netflix’s smash hit female wrestling show GLOW, but it’s his portrayal of young Pablo Picasso in the season season of National Geographic’s Genius that’ll be what Alex Rich is known for.

Not only is it a mountainous feat to take on such an iconic role but to do it in tandem with the one and only Antonio Banderas, well, Rich had his work cut out for him.

Talk about what it’s like to play a young Pablo Picasso, is it a lot of pressure?

Playing Young Picasso came with a ton of responsibility. Not only was he an icon of transformative importance to the art world and the people of Spain, but so much of his immediate family is still alive. Those forces really pushed me to break my back trying to bring truth and honesty to his story for all of the people who care about and knew him. Also, the success and prestige of the first season, mixed with Antonio’s partnership and the high levels at which everyone was operating created massive shoes to fill.

All that said, the support of the team made the process so safe that I felt free to explore with a net woven of their creative genius. I can’t imagine another group that could pull off as epic a feat so quickly and seamlessly. We really became a family.

How did you prepare to play such an iconic and beloved artist during his formative years?

I don’t think I will ever feel wholly prepared to play Picasso. I am still reading and discovering new interesting information about his life and would love to spend ten years researching him because everything he did was volatile, fearless, and exuberant.

When I first booked the role, I buried my nose in a library including the Richardson texts, Fernande Olivier’s diaries, Francoise Gilot’s book, etc. I went to Picasso museums in Paris, Barcelona, and Malaga and collaborated with a dialect coach and Antonio to develop the accent and certain character traits. Stepping into his shoes involved intense emotional work and a complete physical transformation. Luckily, the scripts were extremely well-researched and each department was exceptional, creating a culture where everyone stepped up, pushed and worked harder than any set I’ve seen but also where a ton of work was done before we even began filming.

What was the most surprising thing you learned about Picasso during this project?

The most surprising things I learned about Picasso were in the banal. I loved reading Fernande Olivier’s book because it really brought the human out from behind the mask of his iconic image. The way that he courted her, hung out with his friends, fostered animals, created a shrine to seduce her, talked about art/his vision, and how he was quirky and particular in his process – all of these things helped him jump off the page for me. He was so charming, so full of life and had child-like exuberance yet still so jealous, possessive and driven. The mix of admirable and unlikable traits that make us all three-dimensional became increasingly nuanced the more that I researched. Truly surprising though was how, despite a century’s difference, the emotional journey of his quest to prove himself aligned directly with my experience in acting; uncovering the true timelessness and universality of that youthful ambition grounded his entire reality for me.

How did you and Antonio Banderas work together to create cohesive versions of Picasso at different points in his life?

Antonio was an incredible partner-in-Picasso. The way this season was shot was incredible, because we were together, traveling around Europe, for the duration of shooting. That schedule allowed us the opportunity to visit each other on set, have dinners, and in-between times to discuss physical traits, outlooks, accents, and general information about Picasso’s life. Antonio has such a cool perspective because he grew up in Malaga and knows so much about Picasso and the culture that created him. We collaborated on the way he stood, talked, walked, smoked, played with his hair, the way that he thought, loved, hurt, feared, and felt, and the way that his perspectives shifted and he grew up. It was an exceptional experience.

Do you have a favorite Picasso painting?

My favorite Picasso painting is unconventional and totally off the beaten path. From the second I saw it, I was wholly taken with “Small House in the Garden.” It was painted in 1908, during Picasso’s Cubist period, but I think it does an exceptional job of holding onto the realism of the image, which helped my untrained eye understand the pillars of that movement. The perspective is distorted, but the image is still clear. In the painting, Pablo plays with the light, showing a disparity in time as the sun shifts, and the vanishing point is brought forward so that the plane is flattened, but the image is still clear and the deep greens and browns are striking. I think some of the later works are so deep into the Cubist genius that an unfamiliar eye can get lost, whereas this painting makes the stylistic changes he championed clear in their simplicity.

Don’t miss the premiere of Genius: Pablo Picasso on April 24 at 9pm ET on National Geographic.