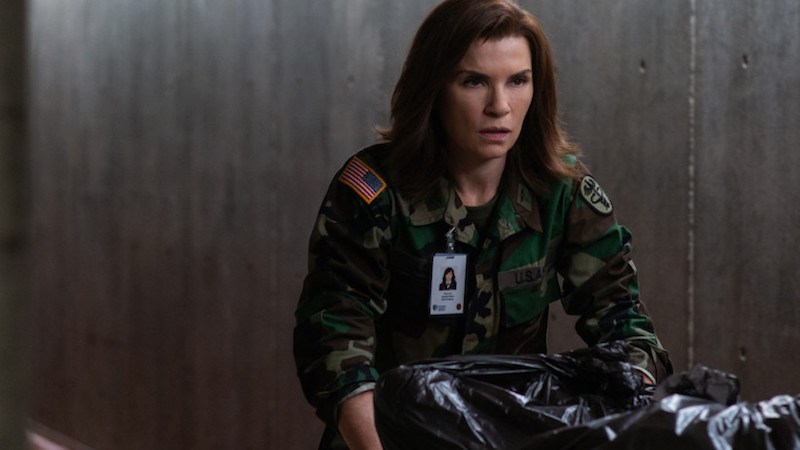 In the summer of 1976, a deadly pathogen emerged in Sudan, one that caused high fevers, bloody vomiting and diarrhea, and typically killed roughly 90% of its victims within three days. While this was happening, another outbreak occurred in Zaire (now known as the Democratic Republic of the Congo). In total, more than 500 people were killed by a virus that was subsequently identified and named Ebola, after the Ebola River in Zaire.

It would be nearly twenty years before Ebola would infect the public consciousness in America, however, with the publication of Robert Preston’s The Hot Zone, the terrifying true story of how the virus very nearly tore through the greater Washington, D.C. area in 1989. In case you have any doubts the role dumb luck has played in how humanity has thus far avoided an existential crisis, Ridley Scott has produced a mini-series adaptation of Preston’s book for NatGeo that recounts a story that Stephen King called “one of the most horrifying things I’ve read in my whole life.”

Julianna Margulies (ER, The Good Wife) leads a cast loaded with some of the best supporting players in recent TV history, including Noah Emmerich (The Americans) as her husband, Lt. Col. Jerry Jaax; Liam Cunningham (Game of Thrones) as Wade Carter; Nick Searcy (Justified) as Frank Mays; Robert Wisdom (The Wire) as Col. Vernon Tucker; and Robert Sean Leonard (House) as Walter Humboldt. Michael Uppendahl, who’s got years of experience creeping out the fans of American Horror Story, The Walking Dead, Legion, Fargo, and Castle Rock, is behind the helm for three of the six episodes, including the first installment (the only episode made available to critics).

The premiere episode opens in Kenya in 1980, as a wealthy white man suddenly takes ill, staggering about his home in a sweat. As his housekeeper dutifully escorts him into a cab, one can only assume he’s heading to the hospital. Nope! He’s getting on an airplane — if you ever find yourself on the same plane as someone who reminds you of this guy in any way, by all means, call your loved ones. Suffice to say, things go poorly.

Fast forward nine years and we see Nancy Jaax (Margulies), a devoted wife, mother, and chief of the pathology division at the United States Army Medical Research Institute of Infectious Diseases (USAMRIID) in Reston, Virginia, preparing Thanksgiving dinner for her family. In the process she cuts herself, suffering an innocuous wound like we’ve all suffered. But this is The Hot Zone, so there’s no reason to show this unless it’s going to foreshadow doom, so buckle up.

A couple of days later, someone leaves a dingy styrofoam cooler, like you’d find on the top shelf in any garage in America, on a loading dock outside USAMRIID. Inside Jaax finds a bloody glob wrapped in tin foil — no note, no label, just a bloody glob. The only thing more unsettling than having a job where this is perfectly acceptable is the idea that this was perfectly acceptable.

Jaax is unsettled by initial tests’ failure to identify the pathogen in the bloody blob as simian fever, and begins to fear it’s something far more ominous. (The fresh cut on her finger does little to ease those fears.) Jaax’s fears are met with condescension from her colleague, Dr. Peter Jahrling (Topher Grace of That 70s Show), an arrogant, over-educated technician who refuses to give any credence to her worst fears. Jahrling is such that he’s the kind of guy who’s still wearing his Dukakis-Bentsen t-shirt a year after the election, but you can’t be sure if he’s trying to keep the flame alive or just having a laugh. Jahrling mocks Jaax’s fears by accusing her of having had her judgment compromised by her former mentor, the mysterious “Carter,” whom we infer is a disgraced pathologist with experience dealing with Ebola.

Seemingly the entirety of the premiere episode is a parade of mistakes and bad decisions — many of them well-intentioned. In particular, Jaax’s efforts to retrieve a second tissue sample are comical and cringe-inducing. If you are reading this right now from somewhere other than the bottom of a burial plot, you know that it all ends happily, but this procedural look at how the People In Charge react to one of the most dangerous threats humanity has ever faced plays like horror.

Seriously, man, they left that bloody blob wrapped in tin foil in a styrofoam cooler. It’s a miracle we’re not all dead.

The Hot Zone premieres on the National Geographic network May 27.