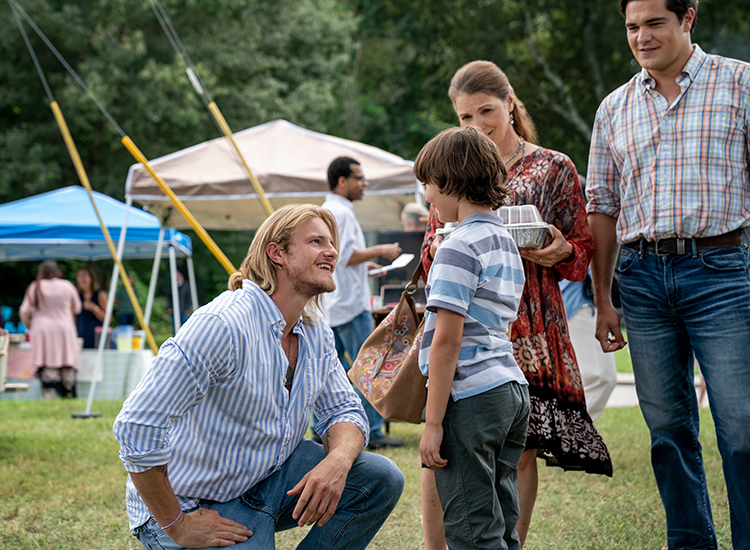 Do heels really have more fun?

First, we should note that in the parlance of professional wrestling, a “heel” is the villain of the match who antagonizes the “face,” the quintessential good guy and hero of the ring.

This spandex-filled world and the tension between those scripted to lap up the uproarious applause and those who bear the cold jeering of the crowd is the heart of the new Starz drama Heels. The show was created by Michael Waldron, a former Rick and Morty writer whose pen is guiding the Marvel Universe right now, with Loki already a monster hit and Doctor Strange in the Multiverse of Madness on the horizon.

Set to premiere Sunday, Aug. 15 at 9pm and starring Stephen Amell (Arrow) and Alexander Ludwig (Vikings) as brothers in small-town Georgia struggling to keep their late father’s wrestling operation alive and trying - but more often failing - to not to let sibling rivalry destroy their fractured family, Heels aims to give wrestling the Friday Night Lights treatment. Despite missing out on that legendary catchphrase, Waldron captures the dogged worth ethic and the gut-wrenching stumbling blocks of pursuing a dream when the world just doesn’t seem to cooperate.

Vivid characters populate the hodgepodge community of strongmen in the locker room (Allen Maldonado, James Harrison, Robby Ramos and Trey Tucker) and the feisty females (Mary McCormack, Kelli Berglund and Alison Luff) who tackle the essential, invisible labor to keep the lights on and egos in check. They help ratchet up the stakes in a way any fan of juicy interpersonal drama can relate to. So, come for the bickering and stay for the abs, which are on full display during some exhilarating tussles in the ring.

In all seriousness, even if you haven't paid attention to wrestling since the Hulk Hogan years of WWF and its weekly Saturday Night’s Main Event airings after Saturday Night Live, Heels will still reel you in. After all, the world of wrestling isn’t too far off from the superheroes now dominating popular culture.

“These guys—especially in these small towns—they get into this thing to sort of become superheroes, to feel like superheroes even if just for 15 minutes at a time in the ring,” Waldron says over a Zoom call. “It’s mythic stories played out on kind of an epic scale. But, what we do in Heels—similar to what we do in the [Marvel Cinematic Universe]—is take these mythical figures and try to find the real humanity in them.”

Back to the original question: According to Ludwig, it’s a resounding yes, heels do have more fun.

“People only love the good as much as they hate the bad and I think there’s this animalistic side to all of us when you see a heel in that ring is that feeling of: How nice would it be just for a couple of minutes to just not care about anything?”

Heels premieres on Sunday, Aug. 15 on Starz at 9pm ET.