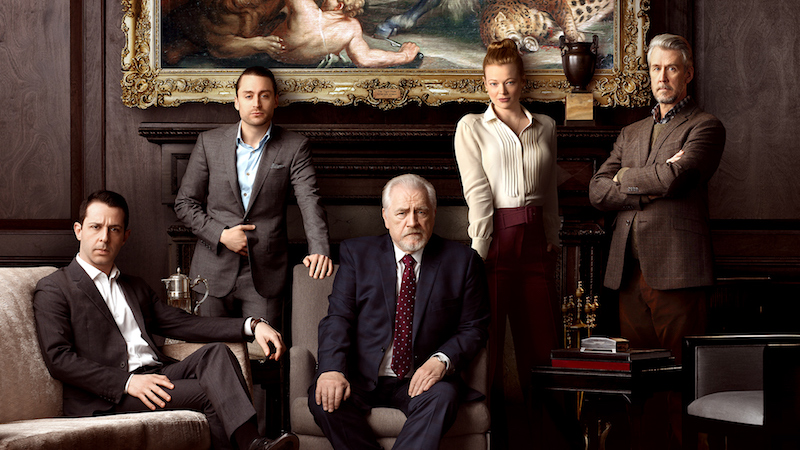 You can be forgiven if you missed HBO’s Succession when it premiered in early June — maybe you were having a nice cool beverage on your back porch, or maybe like me, you had realized by then that Westworld is a garbage fire and decided to avert your eyes from HBO for a few weeks. Or, maybe it just looked too similar to Yellowstone, which premiered around the same time.

It doesn’t matter, and it’s in the past. What’s in the future is your ten-episode Succession bingewatch, and I guarantee that unless you hate carefully plotted, immaculately cast, beautifully acted dramas that closely resemble lethal satire, you will consider it time well spent.

Succession is the story of the impossibly affluent Roy family, whose patriarch Logan (Brian Cox, one of the all-time great That Guy character actors) is founder and CEO of the very Murdochian media conglomerate Waystar Royco, seems to be losing a step in his advancing years. He’s chosen his second son, Kendall (Jeremy Strong) as his successor, but as Kendall struggles to close the deal on acquiring a hot digital-media startup, Logan begins to have second thoughts, and starts dangling the role in front of his other three grown children: wingnut manbaby Connor (Alan Ruck), Logan’s oldest, who makes a big show of having no ambition for the job; competent, quietly ruthless daughter Siobhan (Sarah Snook), aka ‘Shiv’ (an appropriate nickname if there ever was one), who has left the nest and become a Democratic political consultant, very much not in keeping with her father’s values; and youngest son Roman (Kieran Culkin), the most obviously spoiled, irresponsible, and unqualified for the job — which of course does not deter him from jockeying for it.

Key to Succession’s unique blend of drama with knife-sharp social satire is its pedigree, coming as it does from producers Adam McKay and Will Ferrell, who of course collaborated at Saturday Night Live, then moved on to classics Anchorman, Talledega Nights, and Step Brothers, before McKay shifted to a more serious tone with his cinematic take on the 2008 stock market crash, The Big Short. McKay and creator-showrunner Jesse Armstrong, who worked on the razor-sharp British comedies Peep Show and Veep forebear The Thick of It, have here created a potent tonal blend of The Thick of It and The Big Short that somehow manages to earn sympathy for a troupe of thoroughly despicable characters.

Ask around about this show and you might hear something like, “I watched the first two episodes and it was kind of eh so I tapped out.” I admit, even a hardened professional TV viewer like myself needed a couple of extra beats to catch the rhythm of the tune Armstrong and McKay are playing here. But stick with it. After a couple of episodes of table-setting, the whole thing really congeals right around the time Shiv’s fiance Tom (Matthew McFadyen, giving the greatest-ever portrayal of a kiss up/kick down social climber) is reading hapless Cousin Greg (a spectacularly blank Nicholas Braun) in on the company’s darkest secrets by way of stuffing them into a shredder, while the rest of the family gathers for its annual gala while Connor rages at the staff that the butter is too cold and Kendall’s dreams of taking over the company go up in smoke.

I don’t want to say much more, because one of the biggest pleasures of this first season was how totally surprising it was even as its plot developments made perfect organic sense. And, there are few televised pleasures greater than discovering an entire cast of unfamiliar actors (apart from Cox and Ruck, all of them are new to me) absolutely crushing it across the board. Suffice to say that the finale was one of the most satisfying I’ve seen in the last few years, and I am ready to wolf down the next season like Tom and Greg wolfed down those ortolans.

Season 1 of Succession is available on demand on HBO.