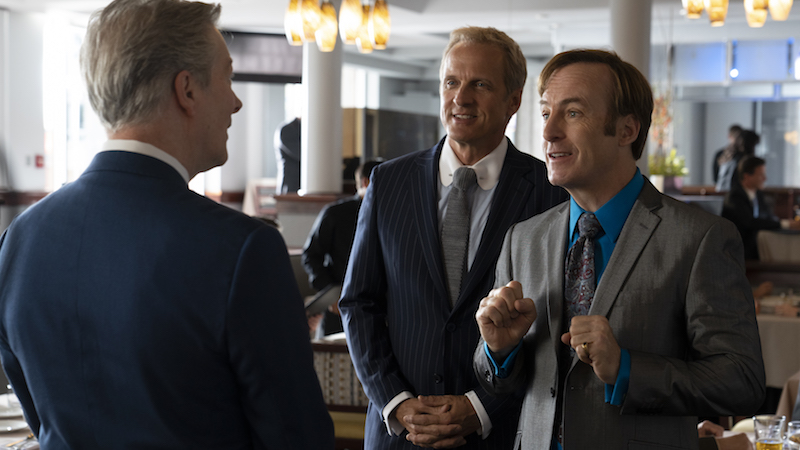 Fans of what is increasingly being recognized as The World’s Greatest Prequel have been waiting since October 2018 to pick up where Better Call Saul left off with the season 4 finale: with disgraced attorney Jimmy McGill (Bob Odenkirk) working up enough crocodile tears over the death of his estranged brother Chuck to get his license to practice law back — and deciding to file for it under a certain pseudonym that may or may not be part of the show’s title.

So, the big question that viewers have been asking with growing impatience — When is Jimmy going to become Saul already? — has finally been answered. But there are a few other big questions heading into this fifth season, premiering this Sunday at 10pm ET on AMC (after The Walking Dead premiere) before settling into its regular timeslot with another episode the next night, Monday at 10pm ET. And be sure to check out our exclusive interviews with the cast in the videos below.

WHITHER GENE FROM OMAHA?

Each season of Better Call Saul has opened with a black-and-white flash-forward depicting a peek at Saul’s post-Breaking Bad life: managing a Cinnabon in Omaha with a bad mustache and an(other) assumed name, Gene Takovic. These flash-forwards have been telling a story of their own in agonizingly short bits, showing Saul’s anxiety at being discovered in hiding, and hinting that the series may eventually catch up to the post-Breaking Bad timeline and reveal the full story of what happens to Saul after leaving Albuquerque a wanted man. Will this season’s premiere move that story forward? Probably. With the show’s creative team having announced that the series will end with a 13-episode season 6, how much of Saul’s remaining 23 episodes will they dedicate to Gene’s story? An epilogue? A whole season? On the one hand, we don’t want to skimp on the episodes where he’s going Full Saul, but on the other, after all we’ve learned about his backstory, it would be a little cruel to sell Gene’s story — where, if we were betting types, we’d imagine Saul will find some kind of redemption for his many crimes — short.

WHAT FAMILIAR FACES SHOULD WE EXPECT?

This show has made the most of its deep bench of potential cameos, with Breaking Bad favorites Tuco, Krazy-8, Gus Fring, Tyrus, Victor, Francesca, Huell, Gale, Hector Salamanca, his twin nephews Leonel and Marco, Lydia, Bolsa, and Don Eladio all having made appearances. The word got out that ASAC Hank Schrader (Dean Norris) and his partner, Steve Gomez (Steven Michael Quezada) will be appearing, so…. who’s left?

Ed the Disappearer (Robert Forster) seems like a good bet, because Saul is the one who knew him to begin with — although Robert Forster passed away a couple of months ago, so it’s going to have to be either season 5 or never. Marie Schrader (Betsy Brandt) seems like a possibility, as she has a little shoplifting problem that she’d likely go to great lengths to keep from her law-enforcing husband… maybe by calling a lawyer who advertises on TV.

The big question, of course, is whether we’ll get a Walt and/or Jesse cameo, and my guess is that they’ll save Walt for season 6, if they do it at all. But I don’t see any way to bring back Jesse other than as a disembodied voice yelling “Bitch” from across the street, seeing as the 40-year-old Aaron Paul would be playing a character who, at the time of the events of Better Call Saul, would be about 15 or 16.

HOW DO LALO AND NACHO FIT IN?

They don’t count as cameos from Breaking Bad, but we did hear about Nacho (Michael Mando) and Lalo (Tony Dalton) in Saul’s first appearance on the show. When Walt and Jesse had him at gunpoint, Saul babbles, “It wasn’t me, it was Ignacio! He’s the one!” (Ignacio, of course, being Nacho’s Christian name). Saul continues pleading for his life Spanish until Jesse tells him to speak English. “Lalo didn’t send you?” Saul asks. So, prior to meeting Walt and Jesse, Saul is going to find himself in hot water with Lalo, who we now know to be Lalo Salamanca, the jovial, affable, taco-cooking enforcer who arrives to assist with the business after a stroke — secretly caused by Nacho — puts Hector (Mark Margolis) in Assisted Living.

RELATED: Season 5 of ‘Better Call Saul’ is the Best One Yet

Unbeknownst to Lalo, Nacho has been working as a double agent of sorts for Gus Fring (Giancarlo Esposito), who harbors deep antipathy for the Salamancas (for reasons familiar to anyone who saw the season 4 Breaking Bad episode “Salud”) and is plotting to cut them out of the Albuquerque meth trade. So it’s a good bet that Nacho will continue to undermine the Salamancas in secret, before eventually being found out by Lalo — or not.

UM… HOW OLD IS KAYLEE?

The saving grace and redeeming quality of cop-turned-assassin Mike Ehrmentraut (Jonathan Banks) is his doting relationship with his granddaughter Kaylee, who he regularly babysits throughout both Breaking Bad and Better Call Saul — you know, between elaborate heists and carefully synchronized mass murders.

However, Kaylee appears to be push-me-on-the-swing-grandpa age in Breaking Bad — six or seven years old — but, when the character was introduced on Better Call Saul, which is set several years before the events of Breaking Bad, Kaylee is (checks notes) five or six.

So what’s the deal here? This is too glaring a detail for the otherwise fastidious BB/BCS team to have missed. Maybe Kaylee is actually 14 in Breaking Bad, but just still really likes balloons, swings, and hanging out with grandpa? We all know meth users do not age very gracefully, but what if Walt came up with a formula that does the opposite — makes you look 7 when you’re 16? Sadly, this is the one question we may never get an answer to.

WHAT’S GOING TO HAPPEN TO KIM?

Kim is different. Kim does not appear, indeed is never even mentioned on Breaking Bad. And that is a key part of Saul’s genius: to imbue a show whose plot should have almost no suspense at all with an even more excruciating kind of tension than the kind you get when you don’t know what’s going to happen to any of the characters. We don’t know where Kim is during the events of Breaking Bad, but we can assume she is out of the picture as far as Jimmy/Saul is concerned. So why is she out of the picture? Is she going to get so disgusted with Saul that she leaves? Is Saul going to try to “help” her somehow and end up getting her arrested, or killed, or disbarred?

My guess is that they are going to have some kind of falling out, and that Jimmy will eventually reach out to her from Omaha, and their reconciliation (not necessarily romantic — some wounds never heal) will provide the “happy” ending for the series.

But one thing I have learned is that it’s a sucker’s game trying to predict what’s going to happen in this universe. For all I know, Kim will turn out to have been pulling the strings for the whole Salamanca/Fring cartel all along, or will break bad herself, bad enough to join Saul’s operation and get herself arrested. I honestly don’t know, and that not knowing is one of Better Call Saul’s chief pleasures. The only thing I’d bet on is that Kim’s story arc will be surprising and great, just like everything else on this show.