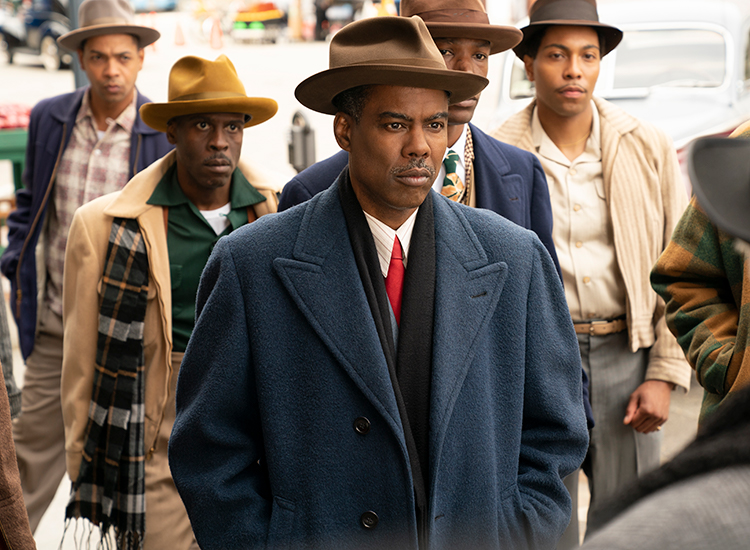 The FX “true” crime series Fargo returns with back-to-back episodes this Sunday. To get you ready for the premiere, two Sling staffers sat down to compare notes on the new season.

Mark Schiff: The first two seasons of Fargo are among my favorite shows of the past decade, and the third was very good. When I heard the new season would be set in 1950 and focus on the Kansas City crime syndicate we got glimpses of in season 2, I was intrigued; my excitement doubled when they announced that the cast would be headed by Chris Rock and Jason Schwartzman.

So I came into this season with massive expectations and I have not been disappointed. The biggest change from past years is that the central conflict is between old school mafia-types, rather than repressed, seemingly banal midwesterners. But at its core, Fargo has always been a meditation on good vs. evil, and its many permutations and appearances. In that respect, this is easily the show’s most epic season thus far. What did you think?

Alex Castle: This is definitely the most ambitious season Noah Hawley has done yet, and easily the most complex in terms of sheer number of plotlines — some intersecting, others more standalone. Indeed, watching these screeners with my wife, we had to do a good bit of pausing to talk through everything going on to make sure we had it straight, but that's a strength, not a weakness. I too was excited when I heard the new season would be set in Kansas City, remembering (like the obsessive Fargo fan that I am) that my favorite character from Season 2, Bokeem Woodbine's laconically chatty mob enforcer Mike Milligan, hailed from Kansas City. It's Hawley's custom to tie each season to one of the others with a gossamer thread, so to quote a certain sheriff from Brainerd, it would be quite a coincidence if they weren't, ya know, connected!

Chris Rock, who after a lifetime making his bones doing standup VERY LOUDLY, has aged into a soft spoken dignity, and brings that to bear here in his performance as Loy Cannon, head of the upstart Black crime syndicate, the latest in a long line of ethnically-organized gangsters to challenge for control the city. Cannon's family reaches a detente with the Italian Fadda family the same way the Faddas held peace with the Irish gangsters before them: by exchanging one of his sons for one of the rival boss' sons. The Faddas are led by Jason Schwartzman as Josto, eldest son of the boss and veteran of just such a swap, and I gotta say, this is my favorite Schwartzman performance since Rushmore. Josto is not the least bit intimidating, and struggles to assert his authority both within and without the Fadda family.

MS: Schwartzman is great and he’s perfectly cast. And I agree, Chris Rock is nothing short of revelatory here; his character is menacing when he needs to be (which is not a word I ever would have associated with him) but he’s also shrewd, astute, and enterprising. A lot of the scenes feature lengthy monologues and extended metaphors and as a stand-up, Rock excels at these bits.

AC: This being Fargo, there are also some cops in the picture: Timothy Olyphant once again pins on a U.S. Marshal's star as "Deafy" Wickware, who partners with Jack Huston's compromised local cop (and desperately twitchy OCD sufferer) Odis Weff. And no season of Fargo would be complete without a dash of Minnesota Nice hiding a more sinister agenda, which is where Jessie Buckley as nurse Oraetta Mayflower comes in. Those are some great character names, another of Fargo's trademarks (who could forget Mary Elizabeth Winstead's Nikki Swango from season 3?). Mark, where do these rank on your Fargo Character Name Mount Rushmore?

MS: Purely in terms of the character’s names, this is definitely the best season of Fargo yet. In addition to the aforementioned appellations, you’ve got Ethelrida Pearl Smutny (daughter of Dibrell and Thurman Smutny), Omie Sparkman, Opal Rackley, and Rabbi Milligan. But the best of the bunch is clearly Doctor Senator, a character who fully inhabits the intellegence, dignity and sophistication implicit in such a moniker. Glynn Turman is tremendous in this part.

I’ve gone back and forth on my favorite character quite a bit but ultimately, I’ve got to go with Deafy. His Mormon faith marks him as an outsider — every major character is an outsider of some sort, which gives the ensemble a lot of different angles and lanes to come at one another — but his cheery temperament and unfailing conviction to his faith and the notion of justice makes him a curious mixture of placid dogooder and single-minded zealot.

AC: Turman, one of the great "that guy"s, is fantastic here, and Doctor Senator is not just the best name, he may also be the best character; his line reading of "Son, I think you may be overestimating your foe" is one for the ages. As Loy's consigliere, he's got a world-weary, seen-it-all kind of vibe about him, a man holding on to a more gentlemanly time in organized crime, who makes a point of keeping regular, cordial meetings with his counterpart, even as the game swirling around them grows increasingly ruthless — sort of a funhouse-mirror throwback to Tommy Lee Jones' character in No Country For Old Men.

As ever, Fargo is not just an homage to Fargo, the movie; it's an homage to the entire Coen Brothers filmography. This season, despite being in a totally different tonal key than the borderline-cartoonish Raising Arizona, the show nonetheless tips its hat to that comedy classic, from its opening sequence (complete with a repeated, directly quoted shot), to a pair of characters and possibly the most satisfying transplanted lines in the entire series, which I shall not spoil here. Anything stand out to you in that regard?

MS: Deafy’s loquaciousness and the fervency of his mission reminded me a touch of Ulysses Everett McGill, George Clooney’s character in O Brother, Where Art Thou? And the officious, smug hospital head struck me as very similar to the corporate bureaucrats who make up the board of directors at Hudsucker Industries. But in terms of tone and plot, it most closely hearkens back to their early gangster flick Miller’s Crossing.

While past seasons had a roughly 65-35 mix of drama and humor, this is definitely the heaviest and most intense year yet. As always, the story features characters making impulsive decisions under outrageous circumstances, but their entanglements stem from oppressive power struggles beyond their control. The hostage exchange between the crime families you referenced is the central metaphor for the season as a whole; whether it’s actual physical incapacitation, watching the powers that be reject then steal your ideas, or random recruitment by chance of birth or proximity, the characters wind up POWs in the war for the American Dream.

AC: At one point, one of the characters muses, “You know why Americans love a crime story? Because America is a crime story.” It’s easy to forget now, 70 years after this tale is set, that each of the ethnic crime syndicates presented this season — Black, Italian, Irish, Jewish — were once considered by many to be something less than American, and, in the face of such bigotry, each are scrambling to get their own piece of the pie. And that may be Hawley’s organizing principle here: that one is not necessarily born “American.” That American is as American does, which is fight—hard—for your piece of the pie. If so, these characters are the most “American” of all, as they try to find their own way to that dream, whether through crime or education or hard work or some combination of the three.

But it’s Fargo, so mostly crime.

The new season of Fargo premieres with back-to-back episodes on Sunday, Sept. 27 at 9pm ET on FX. Use the link below to get FX by subscribing to Sling Blue.

get fx on sling blue
caret