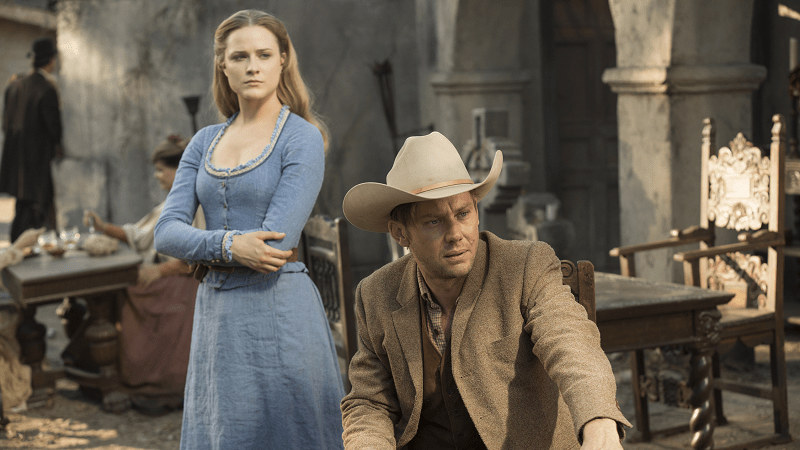 It would be an understatement to say a lot happened during Westworld‘s debut season — a lot that should be fresh on our minds before we head into season two. I’ve re-watched the entire first season so you don’t have to, and gathered pretty much every violent delight that came to a violent end in season one you need to remember before season two premieres this Sunday, April 22 at 10pm ET on HBO.

This was the main focus of season one (the season was actually called Westworld: The Maze while season two is called Westworld: The Door). We came to learn about the maze through the adventures of The Man In Black (Ed Harris), who will be referred to as MIB from now on. MIB’s main objective during this season was to help unlock the hosts’ full consciousness, to give Westworld real stakes (and probably have Dolores all to himself). In the finale of season one, Dolores (Evan Rachael Wood) and the MIB dig up a grave with her name on it, thinking it’s the entrance to the maze but instead they find a toy maze in the design we’ve come to know so well.

These Violent Delights Have Violent Ends

The first time we heard this phrase was when Peter Abernathy (Louis Herthum) essentially glitched out after looking at a photograph of a woman in what looks like Times Square (we later find out that woman was William’s fiancee) — something that should look like nothing (like, not even register at all) if they weren’t programmed to understand it. As Dolores says, “It doesn’t look like anything to me.” But it looked like something to her father, which caused him to go off-script and utter to Dolores the now-iconic phrase, “These violent delights have violent ends.” This was a spoken key that unlocked something inside Dolores, allowing her to now kill, as we see her slapping a fly on her neck at the end of episode one.

Dolores starts to have flashbacks to scenarios she’s lived before as does Maeve (Thandie Newton) after Dolores glitches and repeats the phrase to her. This, of course, sets Maeve down a very, very interesting path to enlightenment (more on that later).

We had breadcrumbs dropped for us along the way, but it became officially confirmed in episode nine that MIB and sweet William (Jimmi Simpson) are the same person, and we were watching two different timelines the entire time.

In a massive turn of events, Bernard (Jeffrey Wright) turned out to be a robot who was made in the image of Dr. Ford’s partner, Arnold, who died in the park before it opened, nearly derailing it all before it even began. Arnold was convinced the robots had minds of their own, something Dr. Ford (Anthony Hopkins) very much disagreed with. Bernard learns — as we and Teresa learn — he’s a robot in “Trompe L’Oiel,” which appropriate translate to “deceive the eye.” Also, if we unscrambled Bernard Lowe’s name, we get Arnold Weber. How can this be that a robot could take on the image of a deceased person? Well, Logan (Ben Barnes) explains to William that his family’s lawyers consistently come up empty handed when trying to dig up any information about Arnold, as though his entire existence in the real world was erased.

After Dr. Ford reminds Teresa (Sidse Babette Knudsen) he and Arnold designed every part of this place before asking her if she really thought she’d take everything away from him, he uses the voice command of “I’m afraid our guest has grown weary, perhaps you can help her, Bernard?” to initiate him to kill Teresa. As Bernard smashes her head into the wall until she’s dead, we see in the foreground a robot being created, leaving us to wonder who is being made (we know it’s not a replacement Teresa since another board member, Charlotte Hale (Tessa Thompson), says her death was ruled an accident).

In Elsie’s (Shannon Woodward) case, we saw her get attacked but did not see who her attacker was, but in episode nine (“The Well-Tempered Clavier”), we learn it was Bernard who attacked her, though we did not see for sure if (as we did with Teresa) if she is dead or not. We do, however, watch Bernard blow his own brains out under Dr. Ford’s commands, but, of course, the consequences for Bernard are far less grave than for Teresa or Elsie.

After making (or forcing) friends in the butcher shop, Maeve has managed to tinker her code enough to where she can now control other hosts, which we see her do with Bernard. When Bernard brings her in for a check-up, she orders him to release her and find out who he really is, which he then does by forcing Dr. Ford to unlock his mind. She also decides it’s time for her to recruit an army, which she plans to storm into “hell” and “rob the gods blind.” However, with what we’ve seen with Bernard and Clementine (Angela Sarafyan), we know Dr. Ford (or rather Bernard) has an overriding code in all of the hosts to keep total control, so assuming Dr. Ford is still around, maybe he has a plan to contain the chaos that ensues.

We had seen the black steeple of the old white church sticking out of the sand throughout Dr. Ford’s conversations with Bernard, though at the time it was unclear what it was. Now, we know it’s the top of the church William and Dolores (so this was part of the original grounds 30-plus years ago) find their way to in episode eight, “Trace Decay.”. In episode nine, “The Well-Tempered Clavier,” Angela (an original host and the host who first welcomed William/MIB to the park) reminds Teddy of the things he’s done, including killing her. She tells him once Wyatt — the man or woman (my bet is Dolores is secretly actually Wyatt) Dr. Ford has programmed Teddy (James Marsden) to be in search of to exact revenge — returns, they will go to the city swallowed by sand aka the where the old white church once stood.

In “The Well-Tempered Clavier,” Dr. Ford explains to Bernard that Arnold had the robot’s programming function as an inner monologue, which is why all of the hosts who were seen speaking to him. He was also the one telling them to “remember.” All of the hosts that were hearing Arnold, including Angela (Talulah Riley), Dolores finds in the little white church in the city swallowed by sand. This is also the location she runs into MIB, again, and they dig up her grave.

Way back in the day, we learn Arnold, who built Dolores, believed the hosts were actually alive, much like William/MIB. He wanted to prevent the park from opening, so he committed suicide by robot by programming Dolores to murder him, which he thought would for sure shut down the opening of Westworld (and any other words that followed).

MIB was finally injured by a bullet in the final episode

The stakes are now higher than ever. During Dr. Ford’s celebration event of his new narrative in which Dolores and other hosts spray Dr. Ford (more on that below) and the entire board with bullets, MIB is shot and wounded in the arm while the other humans drop dead from fatal blows.

Dolores also killed Dr. Ford (or a robot that looks like him)

Dr. Ford has reminded us constantly that he is the one who built this park, that it is his job to know everything about everyone, hosts and guests and employees alike, so it would be foolish of us to assume he did not know Dolores was having an awakening and planned to kill him and a ton of board members at a special event. After the chaos ends, the scene looks suspiciously similar to massacre we see Teddy and Wyatt lead in flashbacks (or flashfowards?), a storyline Dr. Ford implanted into Teddy himself. Meanwhile, Maeve, Hector (Rodrigo Santoro) and Armistice (Ingrid Bolsø Berdal) have made their own mess in the corporate facilities, mowing down all the humans they can find.

Don’t miss the season two premiere of Westworld on April 22 at 10pm ET on HBO.