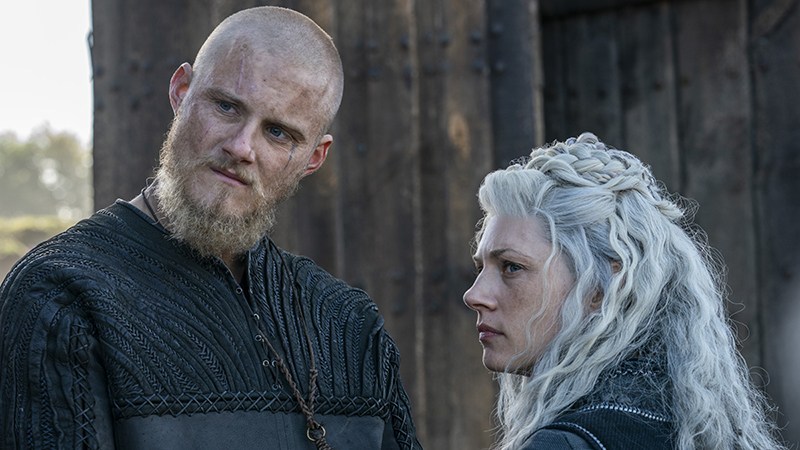 The legend of the Lothbrok clan is entering its final chapter. Vikings, the hit HISTORY drama series, begins its sixth and final season with a two-hour premiere at 9pm ET on Wednesday, Dec. 4.

“I always knew how Vikings would end and, after 89 episodes, I truly believe the saga of Ragnar Lothbrok and his sons has been told and we are leaving our beloved fans with the proper and definitive ending they so deserve,” Michael Hirst, creator, writer and executive producer, said in a press release. “Although it is bittersweet there are still 20 episodes left and the most ambitious and intensely emotional episodes are still to come.”

Given the epic journey viewers have been on since the show premiered back in 2013, that’s quite a claim. From Ragnar’s first raiding party in England to his son’s bloody battle for control in Season 5, Vikings has always been a show of sweeping vision and fraught emotional stakes.

Whether you’re a newcomer to Kattegat or just need a refresher ahead of the season 6 premiere, here’s a season-by-season look at everything that’s happened on the show thus far (SPOILERS ahead, obviously).

What happened this season? We meet Ragnar Lothbrok (Travis Fimmel) and his family: Lagertha (Katheryn Winnick), his fierce wife; Rollo (Clive Standen) his brother; and Bjorn (Nathan O’Toole), his son. When Ragnar’s friend Floki (Gustaf Skarsgård) builds a new type of longship, Ragnar and crew head West to explore (and raid) England. However, Earl Haraldson (Gabriel Byrne) feels threatened by Ragnar and after they face off in single combat, Ragnar becomes the new Earl of Kattegat. Season 1 ends with Ragnar impregnating the rival princess Aslaug (Alyssa Sutherland) and Rollo betraying his brother.

Most shocking death: Earl Haraldson. While it’s not particularly surprising that Ragnar ascends to power (you can consult the history books for spoilers), it comes a little more than halfway through the season, rather than at the end.

What happened this season? Ragnar defeats the treacherous Rollo but spares his life at trail. Aslaug joins Ragnar in Kattegat, but Lagertha is having none of it and leaves with Bjorn. Four years later, Ragnar leads another raid on England, but is blown off course and winds up in Wessex. This sets off a series of conflicts involving King Ecbert of Wessex (Linus Roach), Jarl Borg (who conquers Kattegat while Ragnar is away) and King Horik of Denmark (Donal Logue). The season ends with Ragnar and his allies killing Horik and Ragnar claiming the King’s Sword as the new King.

Most shocking death: While Horik’s death is somewhat surprising, Borg is the first major character to die in the ritualized execution known as the blood eagle. He won’t be the last.

What happened this season? Ragnar and King Ecbert forge an alliance and make plans to sack the supposedly impenetrable city of Paris. A rift grows between Ragnar and Floki, who jealously kills Ragnar’s Christian friend and advisor Athelstan (George Blagden). A fully grown Bjorn Ironside (Alexander Ludwig) becomes a father and helps Ragnar with his plan to take Paris after the Vikings suffer a series of defeats. After faking his death, Ragnar finally gets control of the city. With promises of glory from the French Emperor Charles, Rollo (once again) conspires against his brother, and Ragnar confronts Floki about Athelstan’s murder.

Most shocking death: Athelstan. His struggle with his faith is one of the central themes of this season and his heartbreaking death at the hands of an increasingly mad Floki is one of the show’s most tragic.

What happened this season? With the story split between Kattagat, Paris, England, and even Rome, the scope of Vikings expands considerably in Season 4; fittingly, the show doubled its episode count, dividing the season into two parts of 10 episodes each. The first half centers on Ragnar dealing with the dual betrayals of Floki and his brother (the former is forgiven, the latter defeats Ragnar when he and the Vikings return to Paris). This is also the season where the show transitions away from Ragnar to his family. Following another time jump, Ragnar’s sons with Aslaug assume prominent roles, especially Ivar the Boneless (Alex Høgh), Ragnar’s crippled youngest. The season ends with Ragnar’s sons sacking the Saxons in England and fighting over what to do next.

Most shocking death: There are several surprise deaths this season, including Aslaug, who is finally taken out by Lagertha. But the most significant death is Ragnar’s. His final episode — “All His Angels” — is among the best in the series, as writer Michael Hirst gives Ragnar a stirring final speech before he meets his fate in a pit of snakes.

What happened this season? The first full season without Ragnar focuses on the complicated bonds between fathers, sons, and brothers. Ivar fully emerges as the show’s new villain and after winning a battle against his brothers in the mid-season finale, he’s cast out by the end. Meanwhile, Floki tries to establish a new colony (under democratic rule!), but things do not go well for him. Ultimately, Bjorn is crowned the new King, but his vision of the Seer suggests the war is far from over, setting up new conflicts between the brothers in Season 6.

Most shocking death: Bishop Heahmund (Jonathan Rhys Meyers). The warrior priest was a fan favorite and a fierce fighter, but he gets licked by the conniving Gunnhild at the Battle of Marton. But hey, in real life he was sainted, so his death can’t be that bad.

Tune into the two-hour season premiere of Vikings on Wed. Dec. 4, at 9pm ET on HISTORY.